This is probably one of the more disturbing action figures I’ve seen. With spinning head action, the only think that could have made it more so would be if it shot pea soup of her mouth.

If NECA has this on display at San Diego Comic-Con, I’ll try to get some video of it. Yikes!

…Or at least hers will 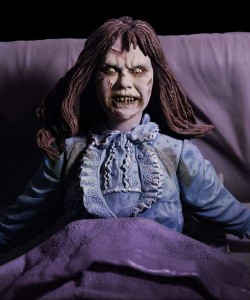 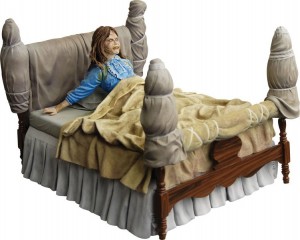 The bed on which she rests is over 7” long, almost 6” across and over 5” tall. Regan herself is articulated at the neck, shoulders, and forearms, and motorized action allows the head to rotate 360 degrees timed in sync with the actual movie scene. The figure also plays music straight out of the film.

In the true spirit of terror — as in, you should be afraid you might not get one — we’re limiting our dear Regan to ONE PRODUCTION RUN. That’s it, buddy. Once they’re gone, they’re gone. It’ll be like they’ve been exorcised from our catalog.