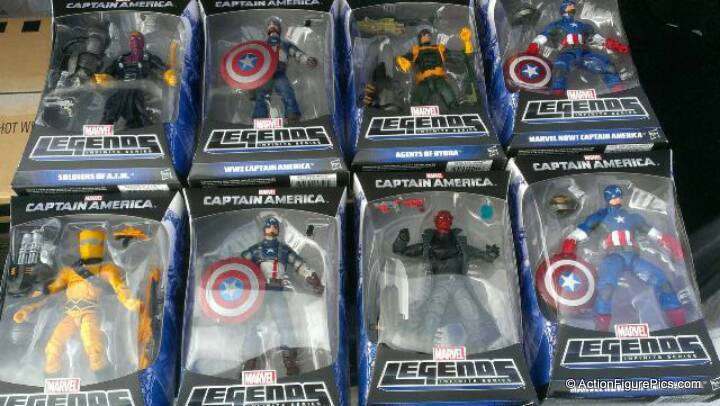 Hasbro’s latest series of Marvel Legends (we’ll just call them Captain America Legends instead of the so hard to remember official name) may already be in the store room of your local Target. Our good pal trs was enterprising enough to purchase a case of these figures yesterday. As you may know, both Cap Legends and Spider-Man Legends (also shortened for simplicity) are due to hit in the New Year. So, if you’re brave enough to venture out on some of the busiest shopping days of the year, you might find these already on shelves – but more likely, you may have to talk to a salesperson about checking in the back.

The case of eight figures has six individual characters: two versions of Captain America (Marvel Now! and movie) at 2 figures each, Red Skull, Hydra goon, Baron Zemo, and AIM goon. The first three pieces for the MANDROID build-a-figure are with Marvel Now! Cap, Red Skull / Hydra, and Baron Zemo / AIM. So, if you buy two Marvel Now! Caps and the four individual villains, you’ll have the start of two MANDROIDS. Movie Cap does not come with a BAF piece, and may not even come with a stand.

Want more info on Cap Legends? Check out the official Marvel Captain America Infinite Series 6-Inch Legends press release from Hasbro, and our shots of the first wave of Cap Legends from New York Comic Con. We’re expecting three of the remaining figures to be movie versions of the Winter Soldier, Black Widow, and the Super Soldier Cap.