Diamond Select Toys has announced figures in their Minimates and Ultimate Quarter Scale lines for Terminator 2: Judgment Day.  These products will be released in conjunction with the upcoming latest installment of the franchise, Terminator Salvation, which opens on May 21.

The Diamond Select Toys (DST) Terminator 2 lines will debut this spring just in time for the worldwide debut of Terminator 4, the latest big-screen installment in the Terminator franchise – which ranks amongst the best box office bets of all time.  The Terminator 2 Ultimate Quarter Scale figures will include cloth outfits and accessories from various scenes as well as internal electronics featuring sound clips from the Terminator’s epic adventures. 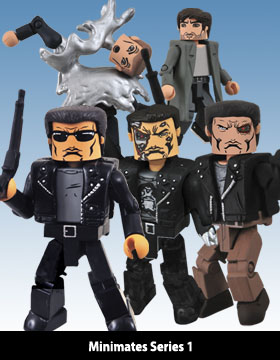 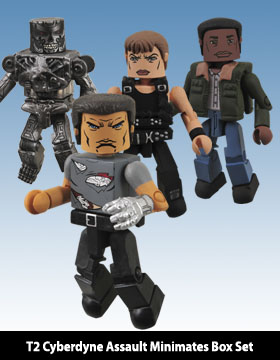 In addition, Art Asylum has designed several lines of collectibles Terminator 2 Minimates which will begin arriving in stores this May.  An assortment of two-packs will be available in specialty comic book stores and a complementary assortment will also be available in Toys R Us.  Both assortments will include the T-800 & Endoskeleton and the Final Battle T-800 & Final Battle T-1000 two-packs, with comic stores receiving the exclusive Biker T-800 & Kyle Reese while Toys R Us offers their exclusive Assault Gear T-800 & SWAT Officer.  The previously announced John Connor, Sarah Connor and Flashback Terminator will be available in future waves rather than being included in Series 1 as originally indicated.

Internet retailer Action Figure Xpress will round out the Minimate cast with an exclusive T2 Cyberdyne Assault Minimates box set featuring even more characters from the celebrated film.  That set will be exclusively available for $20 at this summer’s San Diego Comic Con, beginning on July 22nd, and will be limited to 2,000 pieces.

“The fact that the Terminator franchise can continue to grab the attention of viewers worldwide through movies and a television series is a testament to the success of the Terminator concept.  Humanity’s war against Skynet is such a fantastic concept,” commented Chuck Terceira, Director of Diamond Select Toys.  “Here we are over twenty-five years later and we’re still exploring the repercussions with toys, movies, television, comics, novels and more.”

Diamond Select Toys expects the first Terminator 2 products to be available this May.  For more product announcements and to browse other science-fiction, television and film collectibles, please visit www.diamondselecttoys.com and www.artasylum.com.