Press pics have surfaced for the three 6-inch Marvel Legends prototype figures that Jesse Falcon displayed at Wizard World Philly.  Lady Bullseye, Madrox the Multiple Man, and Warpath will be among 16 – 18 “mostly new” prototypes on display in Hasbro’s booth at San Diego Comic-Con.  Starting at San Diego, Hasbro is opening up a Fan’s Choice poll for a wave of Marvel Legends 2-packs for 2010.

The top three vote-getters will be slotted into that wave of 2-packs.  The Hasbro Marvel team will then pick another 3 figures from the prototypes shown, to be paired up with the Fan’s Choices.  So, three 2-packs, with three of the figures chosen by fans, and three chosen by the Hasbro Marvel team.  The timing for that wave has not yet been determined.

Now, let’s take a look at the figures. 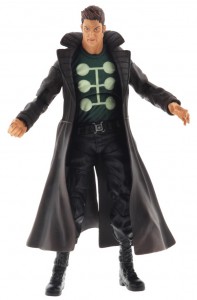 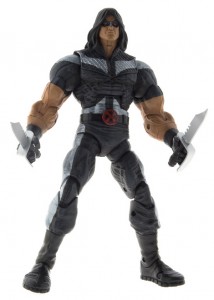 Lady Bullseye is a repaint of the Elektra figure that was released in the first wave of Hasbro’s Marvel Legends 2-packs (with Ronin).  The base figure has been generally pretty well regarded.  It’s got good size, relative to other Marvel Legends.  The articulation functions well – even the elbros that Hasbro’s put in instead of the ball-jointed shoulder / bicep swivel that many collectors prefer.  The only thing new here is the Lady Bullseye headsculpt – since she’s a ninja for the Hand, Elektra’s feet will work with no modifications needed.

The only complaint I’ve heard is about the character herself – a recent introduction in the Daredevil comic by Ed Brubaker, she may be too new to win over Legends collectors who have been waiting for other characters with richer histories in the Marvel U.

Madrox the Multiple Man leverages the Ultimate Nick Fury figure that also came out in the the first wave of Hasbro’s 2-packs (with Ultimate WW2 Captain America).  The trench coat works for Madrox, who is costumed like his modern incarnation in the current X-Factor comment.  The only nitpicky thing is with the military style belt buckle, which may have been appropriate for Nick Fury but I’m guessing Madrox wears a normal style belt.

I like this choice for a two-pack – he’s an army builder, and if this makes it, I hope Hasbro does it right and includes multiple head sculpts that represent the various personalities that have been known to pop out when Madrox replicates himself.  I think there’s a good amount of fans who were hoping for Madrox in his skull-cap and spandex costume from the earlier X-Factor days – while I’ll take him in either of those costumes, I think I’d prefer this one.

Warpath, like Crossbones in the Ares Build-A-Figure wave, reuses the Hulkling body that was released by Toy Biz in the Young Avengers box set.  I like the size of the figure for Warpath better than I liked it for Crossbones, but the big miss for me here is Hulkling’s textured vest.   For Crossbones, they produced a separate tactical vest that covered the texture, but it remains exposed on the Warpath prototype.

Despite that, I’d guess that there’s a healthy appetite for this figure.  X-Force is one of the best X-books being published right now, plus this character provides a variant opportunity for the blue and red costume.  Hasbro’s stated that variants will continue to be planned for this line.

There you have it – what are your thoughts?  I’ll have plenty of pictures of the remaining prototypes in a couple of weeks, when we hit the floor at San Diego Comic-Con.