The Marvel Legends 2-Packs refresher waves, dubbed wave 2.5, are hitting Toys R Us stores now, and Fwoosher canonball was kind enough to send over some hi-res pics of the two sets he picked up, SHIELD Super Spies and Ninjas vs. Super Spies.

With the swap-out of Maria Hill for Sharon Carter, the refresher set has been renamed SHIELD Super Spies from SHIELD Leaders.  The set still comes with both female heads, but the Maria Hill head has been repainted to serve as a generic female SHIELD agent.  Iron Man is looking snazzy in his Stealth Armor, and he also comes with the alternate Tony Stark head and interchangeable hands. 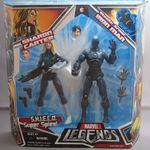 This update replaces the red Hand Ninja with a new white deco and Nick Fury with Dum Dum Dugan.  Dum Dum Dugan!  The Hand Ninja still inexplicably comes with three swords (and a set of nunchuks), while Dum Dum comes with an alternate SHIELD agent head with removable helmet, assault rifle, pistol, and knife.  These are the same accessories as in the Fury set.