It’s been quite a wait since we the last wave of Marvel Legends 2-packs. We posted our last review, of the Dum Dum Dugan and Sharon Carter 2-pack, almost exactly a year ago. Now the latest set of 2-packs, featuring Valkyrie and Hulk, Black Widow and Winter Soldier, and Deadpool and Warpath, are hitting Toys R Us stores. I don’t have these in hand yet, but gunbuster718 of the Fwoosh was kind enough to share his pictures. I’ll write up some quick thoughts but will reserve judgment until I have my own set to review.

I’ve heard from some folks that Valkyrie was tooled up quite a long time ago. If that’s true, it would account from the style of articulation present from earlier Hasbro Marvel Legends. It looks like her head got a little pinched in the process too – but I hope the cross-eyed paint apps on the eyes are not prevalent.

I’m not a fan of the literal translations of McGuinness art to action figures. This strikes me as a faithful representation, and another Hulk with two fists is welcome. 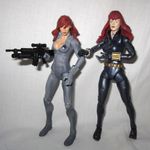 I think this two pack may be the best case for figure reuse that I’ve seen from Hasbro thus far. Natasha is a definite upgrade from the Toy Biz version from ML series 8 all around. And Winter Soldier features some great new parts on top of a reused body that is hard to identify. But the figure looks so good that you probably won’t even care.

I know some people were wary of Deadpool winning a slot in the fan poll, but I’m all for getting a new version of the character. X-Men costume from that Cable is the Messiah arc of Cable & Deadpool isn’t quite as fetching in action figure form as I was hoping, but I think I’ll need to see him in red and black before I know how much I like it. I’m psyched for the harness and new boots – those look especially good and I’m glad they went the extra mile on those.

For Warpath, while I appreciate the new torso to get rid of Hulkling’s padded muscle shirt textures, I think they should have tried to give it texture on the legs, for example.

Are the heads interchangeable with previous 2-pack figures?

I am hoping to have a set of these in hand in short order by next weekend. If all goes well, I’ll hope to have more pictures soon

Thanks gunbuster for sharing your pics! You can read his thoughts on the original post on the Fwoosh.