If you had told me a few years ago that I’d be hunting for urban vinyl figures of Marvel characters, I’d probably have laughed. Urban vinyl is stuff that my wife likes – me, I like action figures! But here I am, taking pictures of the Marvel Mighty Muggs Logan. And yes, I’ve been hunting for this guy for a long time.

Logan came in a case pack with fellow X-Men Cyclops and Jean Grey, and long-time adversary Sabretooth.  Most folks must have found Logan the most appealing of the bunch, because all I ever saw were the other three.  I mean, look at the guy!  He’s got a great expression, a wifebeater, and a removable hat.  Mighty Muggs Logan is an irresistible mix of cuddly and killer.  My only gripe, if it could be called that, is that his claws are placed somewhat low, so they look like they could be coming out of his fingers instead of the backs of his hands.  The San Diego Comic-Con exclusive Wolverine got that part right. 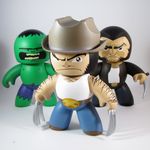 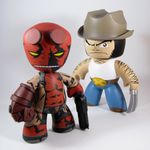 Because I have been looking for this for such a long time, I was seriously considering going the eBay

route.  The online retailers had caught onto his appeal and were charging for him what you might pay for a set of all four figures that came in the original case pack.  I also thought about picking up a case and reselling the other three – but I knew I’d probably just keep them all.  Finally, I just bookmarked his page on Hasbrotoyshop.com and started checking regularly.  A few days ago I lucked out!  He’s out of stock again, but if you’re looking for one of these, that’s probably your best bet to get one at a reasonable price.