So, courtesy of the Marvel Universe Covers Contest and our good friends at Hasbro, we can begin our coverage of San Diego Comic-Con toys a day early.  If you’re into urban vinyl that is both cuddly and deadly, then look no further.  The San Diego Comic-Con exclusive Mighty Muggs Wolverine is just that.  He’s also the first Mighty Muggs Wolvie to feature retractable claws.  SNIKT! 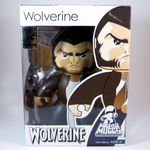 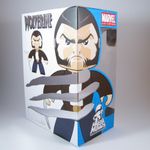 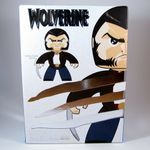 Let’s start with the packaging – like all of the Mighty Muggs to date, it’s got the standard cardboard box with a front picture window.  It features character-specific card art on the front, sides, back, and top, with the latter featuring a rendering of Logan’s face.  I’ve seen some pretty cool collections of Mighty Muggs boxes – and they’re typically displayed with the headshots facing forward and stacked.  This one will make a pretty good addition for such a collection.

The packaging does have a unique feature.  Traversing front, sides, and back of the box are two sets of slash marks, revealing a shiny layer underneath.  This is achieved by producing the inner tray in silver-colored cardboard – a very nice touch.  The figure is held into the tray with the standard rubber bands around the arms and neck. 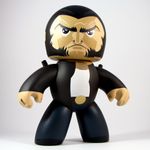 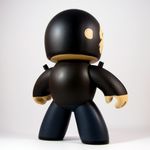 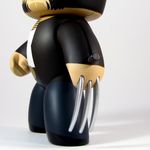 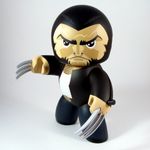 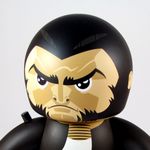 There’s no indication whether this is a comic or movie-based Wolverine, and in this look, it could be either.  Leather jacket, wifebeater, and blue jeans have been in both mediums.  Lines are crisp and clean – like they’ve been on every Mugg I have.  The design on the face evokes Logan, and while the standard Muggs head doesn’t allow for the distinctive hair, Hasbro has used paint apps to suggest it.  There’s no mistaking the muttonchops.

The claw mechanism works using a channel for a peg that’s connected to the claws.  Movement is easy, but not loose – the claws stay retracted if that’s how you want them.  They retract fully into the arms, and you can also position them at varying degrees of poppedness.  That’s a word I just made up.  Hasbro hasn’t hindered any movement of the figure by including the claws – the arm swivels and head swivel are all still functional, just like any other Mugg.

All in all, if you collect Marvel Mighty Muggs, this will be a fine addition to your collection.  Wolverine will be available at San Diego Comic-Con (starting tomorrow!) and in limited quantities after the show at HasbroToyShop.com.  SNAKT!