I had hoped to do a joint review with Pablolobo from the Fwoosh, since he got his hands on the blue and yellow version of Goliath, but he has been too busy running marathons, pooping, and giving presentations (hopefully not about pooping) at work.

We’ll be taking a look today at the two Marvel Universe Gigantic Battles sets that are exclusive to Wal-Mart.  The first set features a Giant Skrull and the Bucky Barnes Captain America, and the second features Goliath and a pointy-headed Iron Man.  I liked the idea of these very much when they were first announced, because it’s another sign of strength for the Marvel Universe line, and could be a stepping stone to other large format toys, like vehicles and playsets.  Let’s see how these held up in production. 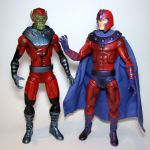 If you’re not current on the big Marvel events, you might be wondering why there’s a giant Skrull to begin with.  In last year’s Secret Invasion, our friends the Skrulls have secretly invaded (clever, huh?) the Earth by assuming the identities of its heroes and villains.  When the invasion is revealed, we learn that these Skrulls have been imbued with the abilities of multiple supers, making them even more deadly!  Exciting!

This giant Skrull was featured in a few panels during the climactic battle with Earth’s remaining heroes and villains, and as such, we didn’t get a name or a complete list of his powers.  We do know he gets big though, because there was one scene where he bitch slaps Asgardian across Manhattan.  This figure reuses the Marvel Legends Icons Magneto body with added shoulder pads and a new head (natch).  As such, his gauntlets and boots feature the Magneto stripes and aren’t quite accurate to those few comic panels.  He’s got a great head sculpt, and his colors are appropriately Skrully. 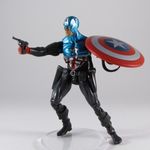 The Skrull’s opponent in this two-pack is the Bucky Barnes version of Captain America.  I’ll risk spoiling those of you who aren’t following Cap – Steve Rogers is dead (or is he?) and Bucky (who never really died) has stepped into the role.  There’s a lot more to it than that, written wonderfully by Ed Brubaker, but suffice to say we’ve got a new Cap in a new costume that was designed by Alex Ross.

That design is captured in plastic quite well here, although it looks like a notch of blue at the top of the center red stripe is missing.  Cap’s gun (yes, Bucky carries a gun) and knife are removable, and the shield has both elastic straps and plastic clip.  The big drawback is that the base figure used is the very tired and very flawed Daredevil / Bullseye body from Marvel Universe wave 1.  That means the body is about one set of abs too short.  Some people have commented that his head is too big, but I think it would be fine if the figure was better proportioned.  I am very tempted to fix him like I did the Secret Wars Magneto, although there would be more work involved. 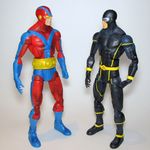 Long-time Avengers fans will recognize this costume, the red and blue duds of Hank Pym as Goliath.  There’s also a blue and yellow version that I’m told was a running change.  If you’re finding these in stores, you’ll probably only see one version or the other, as I don’t believe the versions were shipped in mixed cases.  There’s been a surprising amount of backlash over this figure, as the red and blue hit first, but many were wanting the blue and yellow.  I already have a blue and yellow Goliath way back from Marvel Legends series 4, so I’m glad to have a different costume available.

This figure mostly reuses the Astonishing X-Men version of Cyclops that came out in Marvel Legends Icons, but it’s got different lower legs and a new belt and head.  Because of the reuse, there’s costume details that worked for Cyke but don’t for Goliath, like the piping on the torso and shoulders and the wrist straps.  The head sculpt is very nice, fitting in with previous renditions of Hank.  And it works better on the red and blue, because it’s missing antennae for the blue and yellow costume. 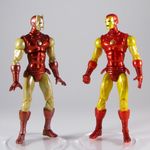 Goliath’s companion in his set is the pointy-headed version of classic Iron Man.  Marvel Legends collectors will remember that way back in series 1, shellhead had a pointy-headed variant that was largely ignored but later became one of the Holy Grails for Legends collectors.  I’m not suggesting that will happen with this figure – it’s just a nice nod to that line that we get this variant in Universe too.

This is the third Iron Man to use this base body – the others came in Marvel Universe wave 3 and Marvel Universe Secret Wars wave 2.  This one is colored more like the MU version and features a repulsor blast right hand instead of a fist.  Some people find the torso too skinny, but I have been a big fan of this base body since it was introduced.

So there you have it – the first series of Marvel Universe Gigantic Battles.  Although there’s nothing concrete that’s been announced, Hasbro did let us know that the next incarnation of Gigantic Battles (if they can get it to shelves) would include a newly-tooled Galactus featuring electronic lights and sounds.  We’ll see if we can get some more info on that, but we’re not expecting it to hit shelves until the second half of 2010.  Until then, we’ve got the single-carded Marvel Universe and Secret Wars 2-packs to keep us occupied.