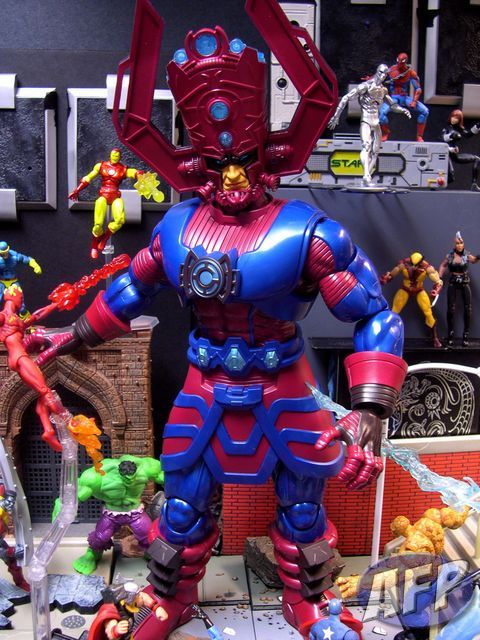 Brace yourselves, AFP readers! Today we’ll take a look at Hasbro’s 19-inch Marvel Universe Masterworks Galactus! Before last year’s announcement of this large-sized figure, the chances of getting large figures like these seemed slim. Toybiz created some of the tallest Build-a-Figures like the Sentinel (16 inches tall) and Apocalypse (15 inches). When Hasbro took over, they veered towards smaller BAFs like the Blob and Ronan. They did do a Fin Fang Foom (about 15 inches), spread over two Hulk-themed waves, but since then have stopped doing Marvel BAFs. They also released the Wal-Mart exclusive Marvel Universe Gigantic Battles, which included some large figures like Giant Man and the Skrull Giant, each packaged with a smaller Marvel Universe figure, the giants were around 12 inches tall, still considerably shorter than the Sentinel and Apocalypse.

It seems the Gigantic Battles were a testing ground to see if there’s interest in large figures, as we now have this 19-inch Galactus arriving at Toys R Us shelves – and available online too! Forgive my excitement – as much as I love the older Toybiz Marvel Legends BAF Galactus (he was the first of his kind) and have fond memories of assembling him, I am happy to see Hasbro make a larger, more imposing Galactus! 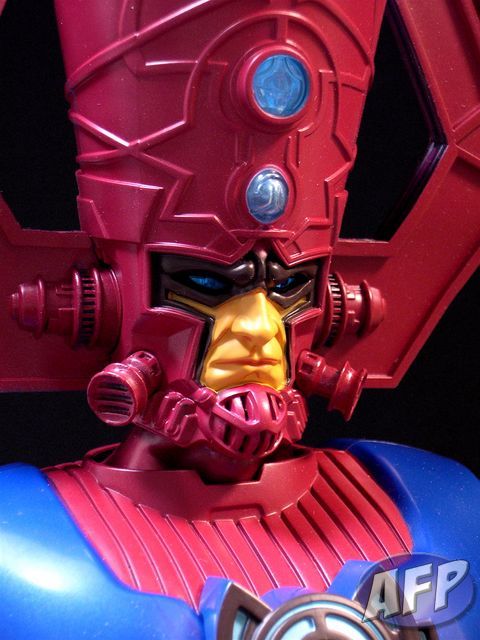 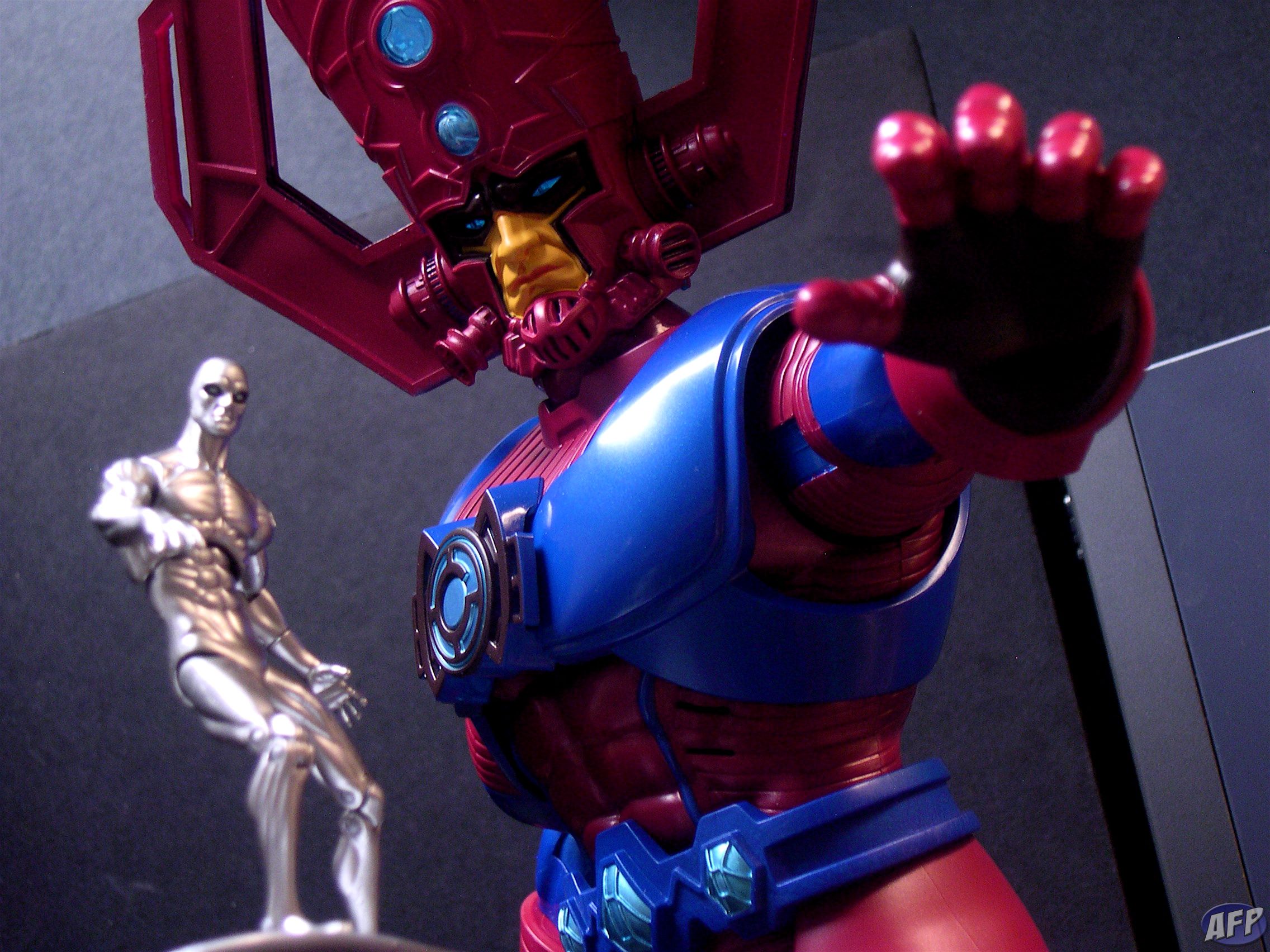 Galactus comes in a box with a front flap that flips open so you can see the figure inside. As with any toy with electronics, there’s a “try me” button, so you can see the lights in his head and hear his phrases. The good thing about this is you can check if the Big G has working electronics before purchasing him. Of course, the SDCC Exclusive Packaging still rules (I couldn’t bring myself to open it!), but I think this packaging is still nice. It’s got artwork all over and you can actually put Galactus back in the box. Taking him out doesn’t involve tearing/breaking any packaging, although I did snip the paper ties in my rush to open him.

This Galactus is one large, hefty figure. As I mentioned, he is around 19 inches tall and about 5.5 inches wide shoulder to shoulder. He’s got some electronics in him so that probably adds to his weight. Large as he is though, I don’t have a lot of problem standing him up. He’s pretty stable. 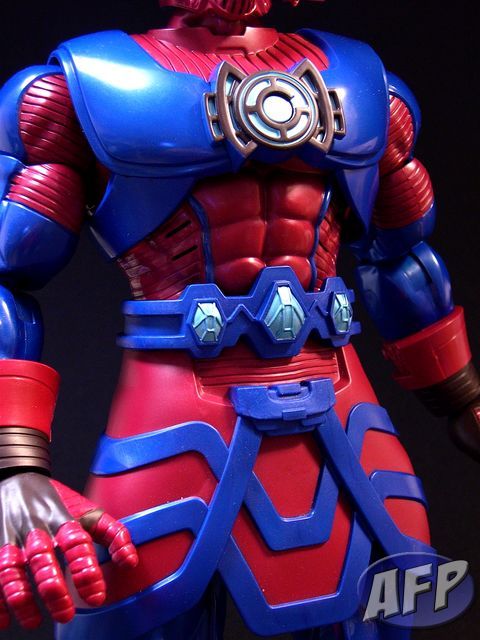 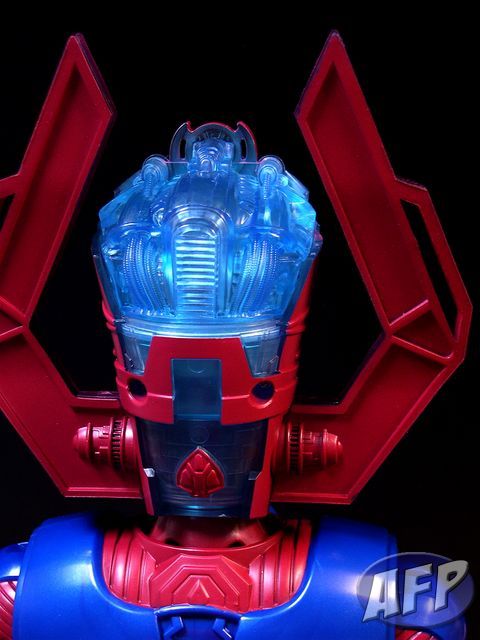 The sculpting on this figure looks really good, especially his head sculpt. There’s some nice detail on his face and his helmet and the overall shapes of his costume are nice and crisp. They used softer, more flexible plastic for his chest cover and his skirt, but they don’t look like it at first glance. They also used a softer plastic on his helmet side “ear wings” (for the lack of a better term), probably for safety reasons. I like this as these points would break easily from a fall if they were brittle plastic. They also used clear blue plastic on the back and interior of his helmet so you get  some illumination on his eyes and clear helmet parts when the light hits them. It’s very similar to what Hasbro does to their Transformers’ heads.

If there’s anything I can nitpick on the sculpting it would be his hands. They seem to be softer in sculpt, and since Hasbro chose to do a ball joint for the articulation, it does break the sculpt at the wrist a bit. Still it is a minor nitpick, as I am all for ball-jointed articulation. I just wished they could’ve integrated it better with the sculpt. 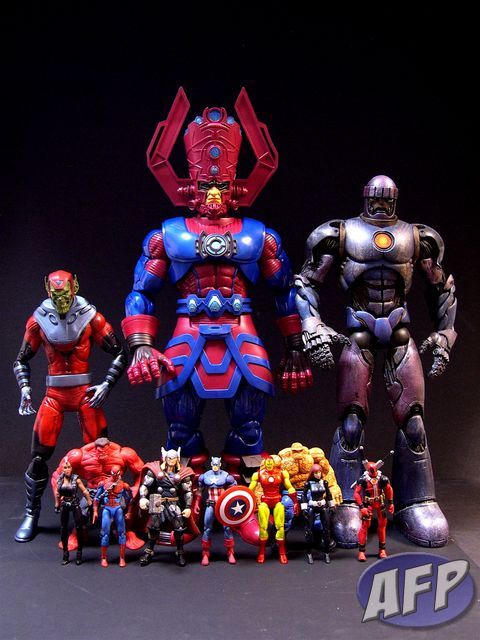 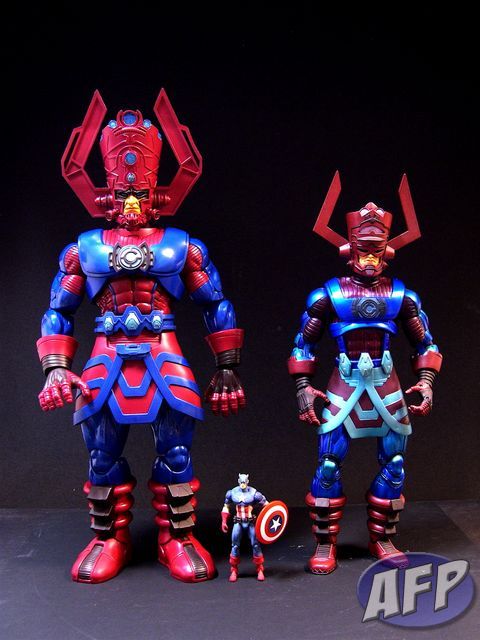 As you can see from the size comparison pics, he is the tallest Marvel figure in both the Marvel Universe and Marvel Legends lines! Most of his added height does come from that big helmet though, as he is almost shoulder to shoulder with the BAF Sentinel. He looks great with Hasbro’s Marvel Universe figures, and he’s big enough to be included in any Marvel Legends collection! You can also see how Hasbro can build a nice range of figure sizes if they keep on doing their Gigantic Battles line (they have Bill Foster Giant Man and a Frost Giant planned for next year). 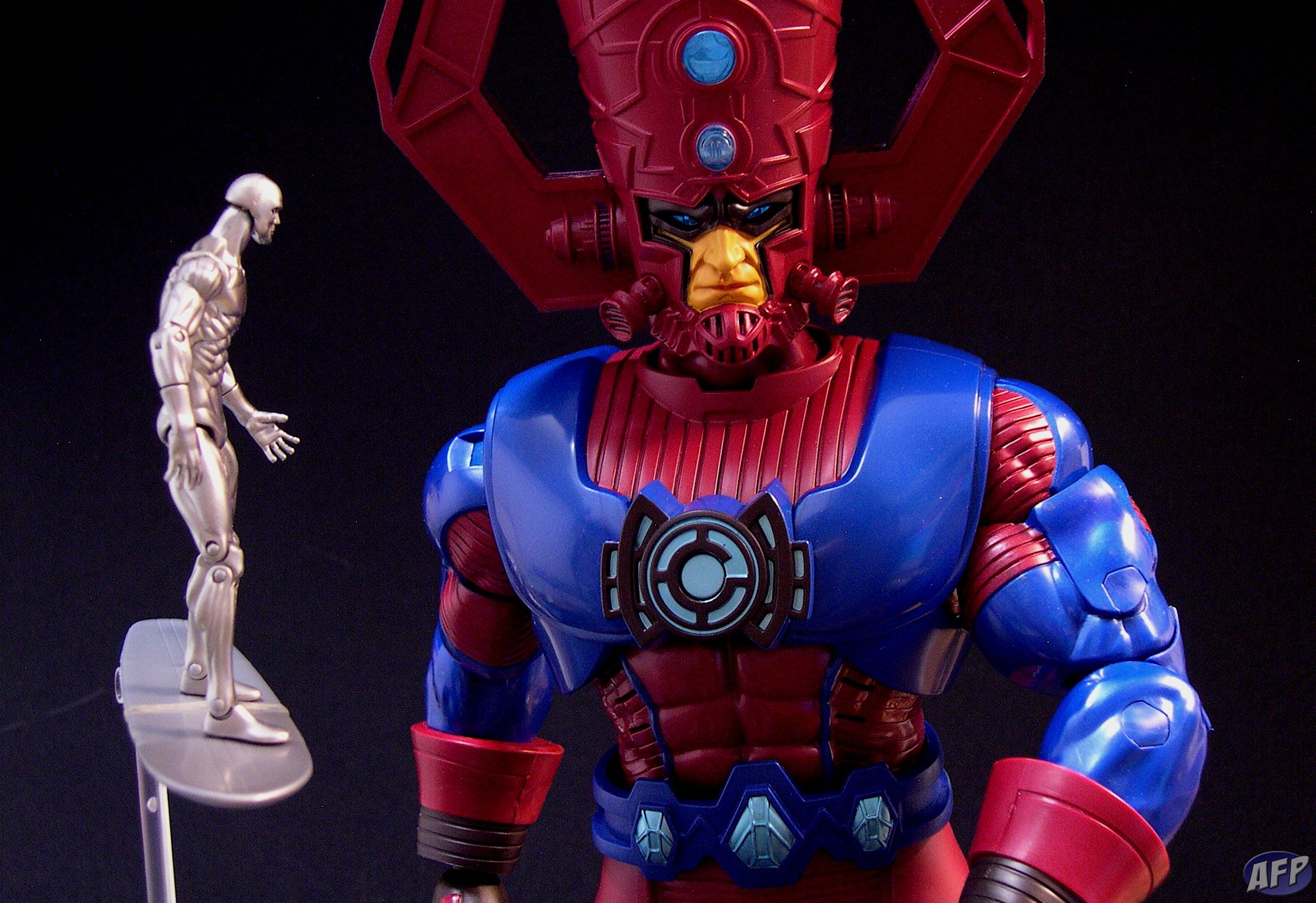 Paint-wise the applications on the figure I got was good. The burgundy parts on his arms and his skirt are painted crisply, while some of his parts are already casted in painted plastic. The only part where I noticed some paint nitpicks is on his face. There is some paint bleed in the part where his helmet meets his face.

The Toybiz BAF Galactus had some metallic burgundy on his helmet and other parts of his body, which I wished they would’ve used also on this Galactus. I’m a sucker for that metallic look and it would’ve made him look more cosmic, in my opinion. 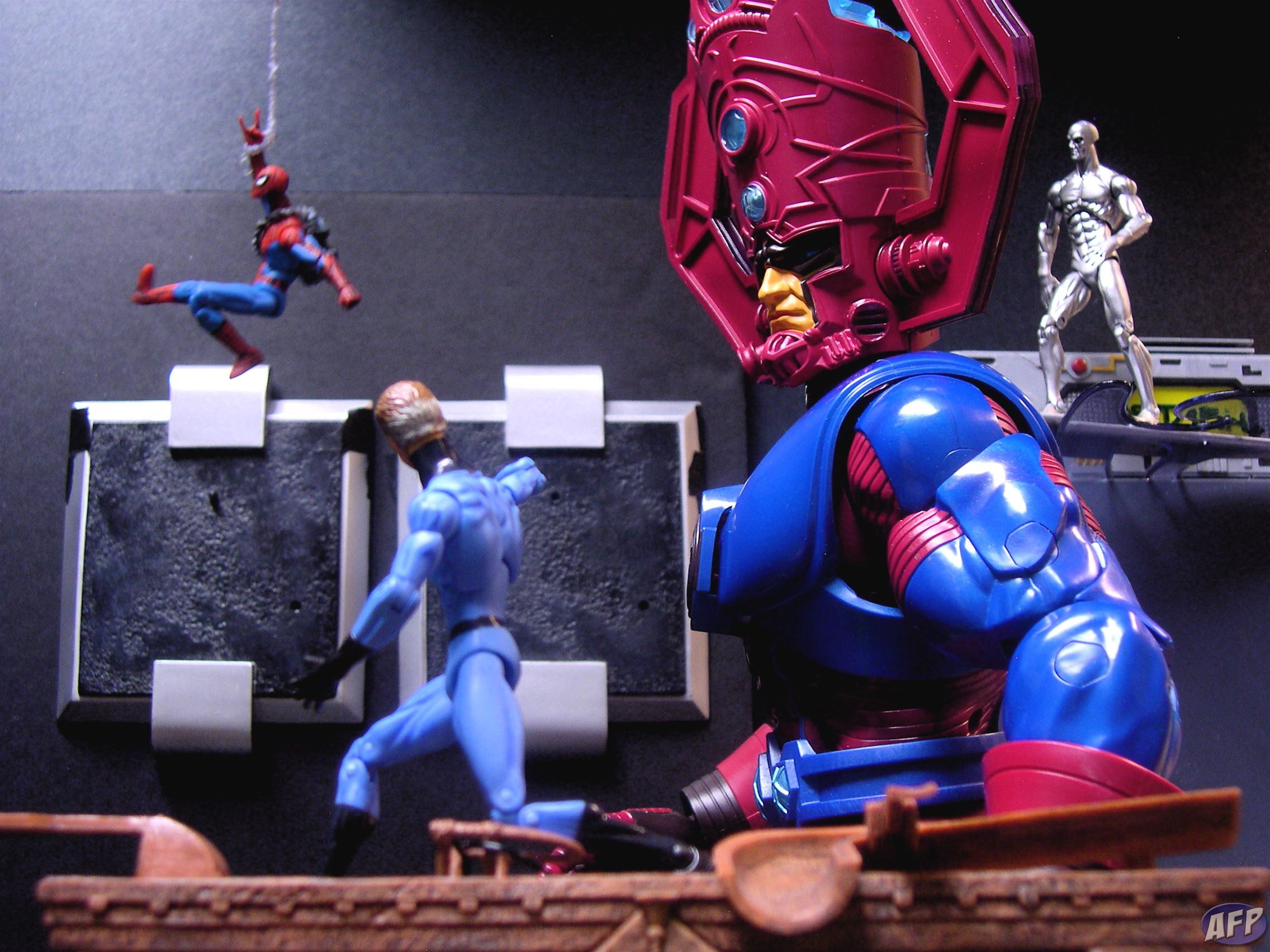 Articulation-wise, he has a ball jointed head, ball shoulders and hips, and double-jointed elbows and knees. He also has swivels on his biceps, gloves, hips, boot tops and waist.  Lastly, he has ball-jointed wrists and hinged ankles. All of these joints were nice and tight on my figure. He won’t be doing splits or crouches as his skirt does restrict some movement, but the range of movement is good enough for some “stomping around” poses. With any figure that has electronics there is the potential of sacrifices on articulation. Thankfully, they only had to take out his ab articulation, as the bulk of his electronics is in his torso. Even with lights on his head, he still has the full ball-jointed range of movement, which I am happy about. 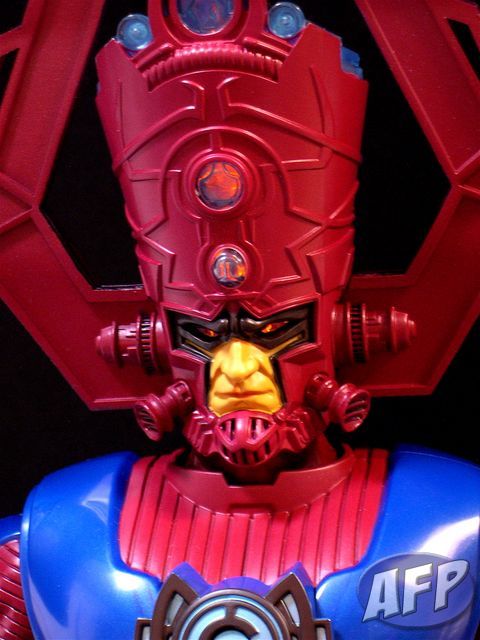 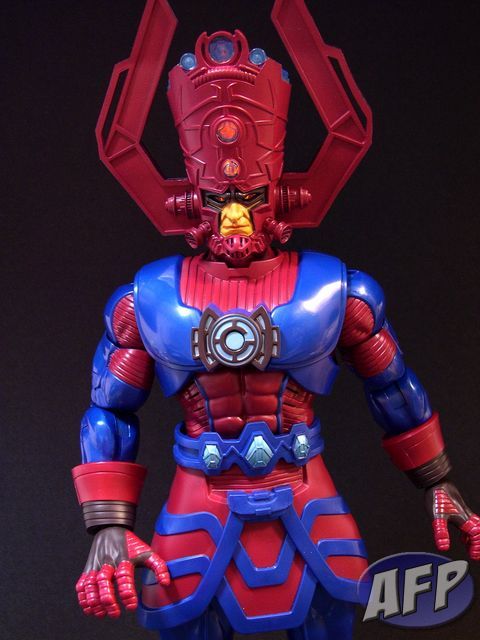 Speaking of lights, press the button on his chest piece and his eyes light up and he says any of 11 recorded phrases such as “I am the devourer of worlds!” and “I hunger!” Although the picture above captured it perfectly, the orange light-up feature is not as effective as I thought it would be, as the light is a little faint. I also have an issue with his voice. After listening to him over and over again, at some points his voice seem too cartoony. I even hear a little bit of Yoda on some of the phrases. They could have done a better job making his voice a bit more serious and intimidating. I kinda laugh hearing him say some of the phrases! 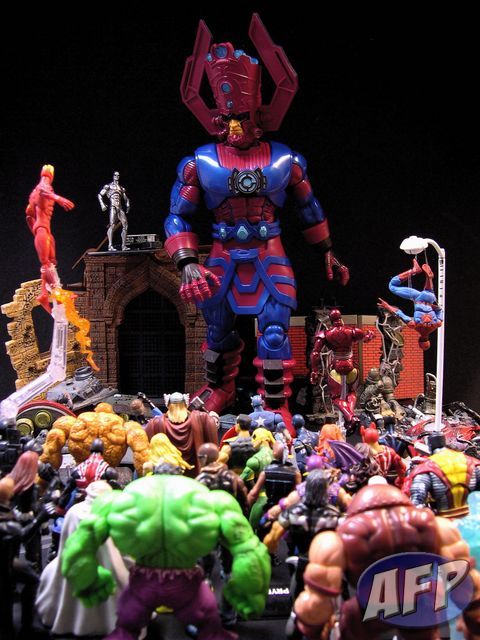 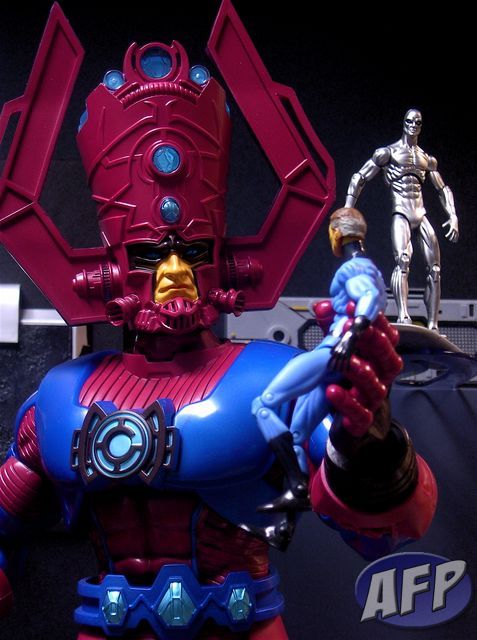 Galactus comes with a Marvel Universe Silver Surfer packed in. I don’t have the older Silver Surfer to compare him with but I heard he has more of a silver chrome paint application than his first release. I can’t wait until they do a new Silver Surfer with an updated body, I’m really not fond of this body and he’s very limited as far as posing on that surfboard is concerned. He seriously needs some hip swivels. 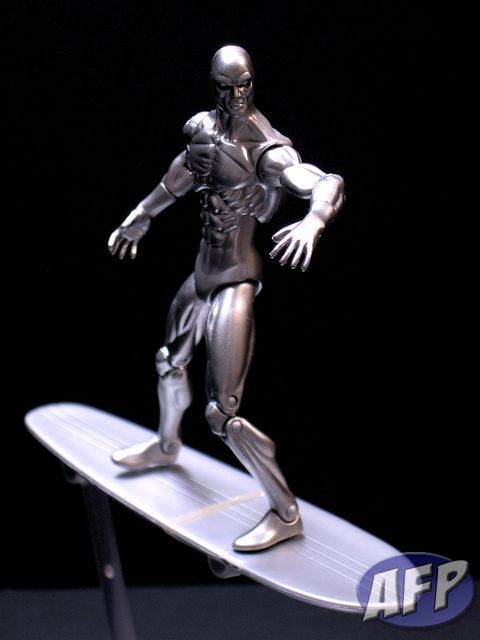 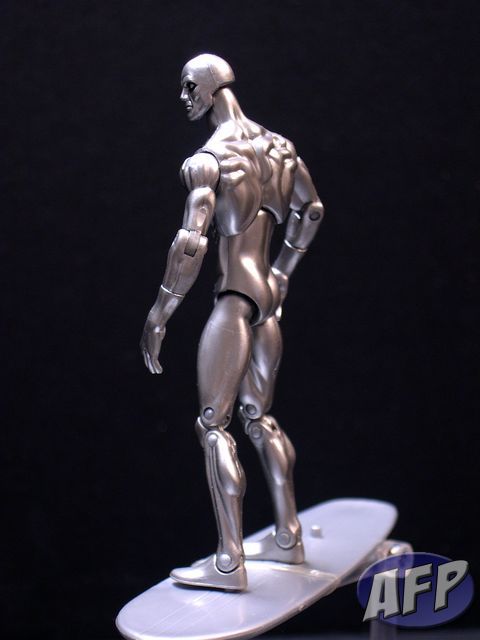 Galactus also comes with an oversized Top Secret file, with his own oversized Superhuman Registration Act card. The fingerprint on the card made me snicker a bit. They also included instructions on how to change his batteries. 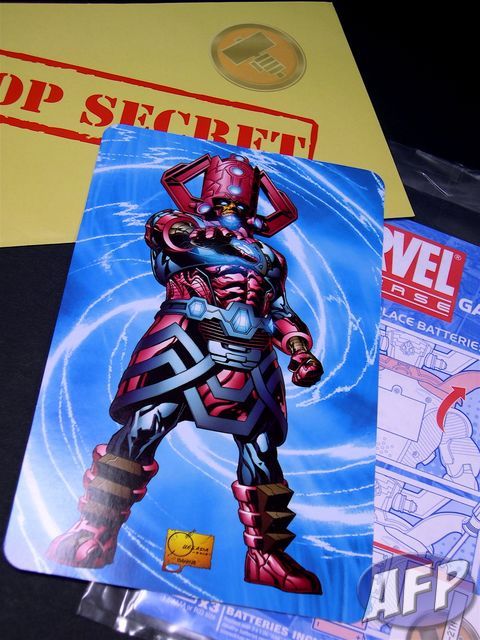 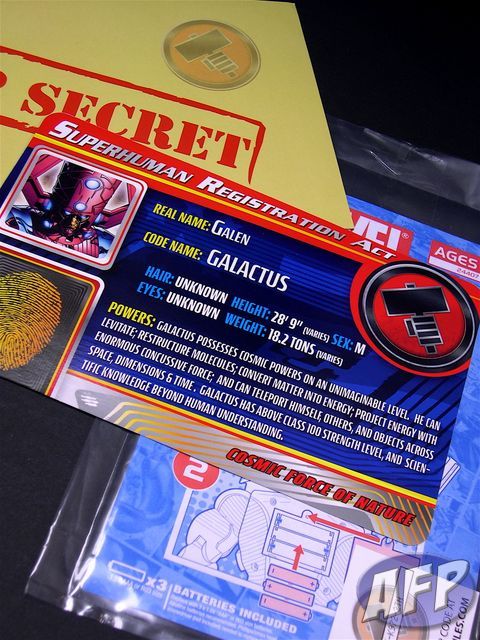 You can see how huge this Galactus is, and he certainly makes a great centerpiece for any Marvel Universe/Legends Collection. This is how it’s supposed to be. Galactus should be the biggest one around! 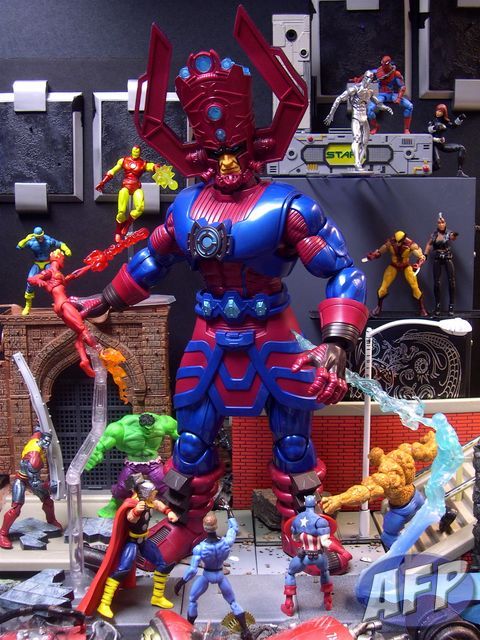 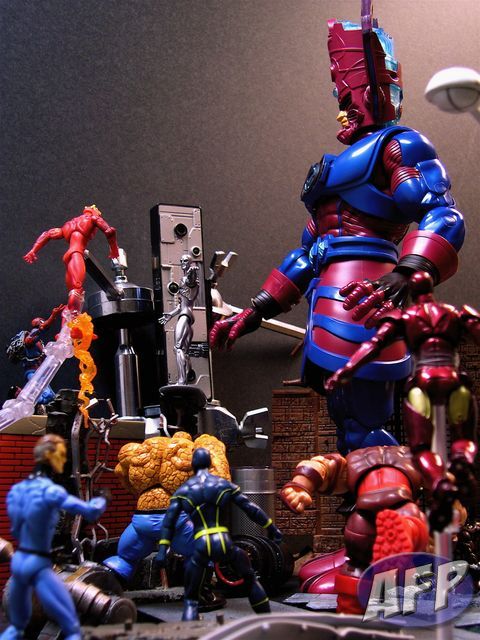 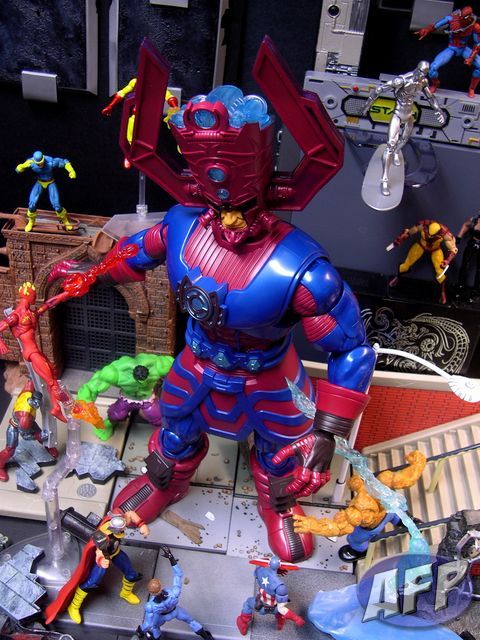 I got Galactus at my local Toys ‘R’ Us for $49.99. I thought this was a great price for an oversized character like him. Not only does he include electronics for lights and sound, which usually adds more to any toy’s price, he also has a Silver Surfer packed in, which really adds to his value. I felt that the $50 I spent was well worth it. (I waffle back and forth about picking up a $70 Masterpiece Grimlock!)

(Ron’s note – for those of you who are unsure whether you’ll find him in your local stores, Galactus is in stock at ToysRUs.com for $49.99 – and shipping for me was under $5!)

For Ultimate Alliance fans, be on the lookout for the variant color scheme of Galactus, as he appears in the game. I thought the variant looks cool as well, even though I haven’t seen it in person yet.

All in all, I am really happy and excited that Hasbro decided to do the Marvel Masterworks line. It’s a good way to release some oversized characters like Galactus here and next year’s Sentinels. It’s also good timing for them to release it around the last quarter of the year, closer to Christmas, making it easier for these higher-priced items to be picked up as gifts for any Marvel fan for the Holidays.

That’s it for now, I hope you all enjoyed the pics and thanks for looking! 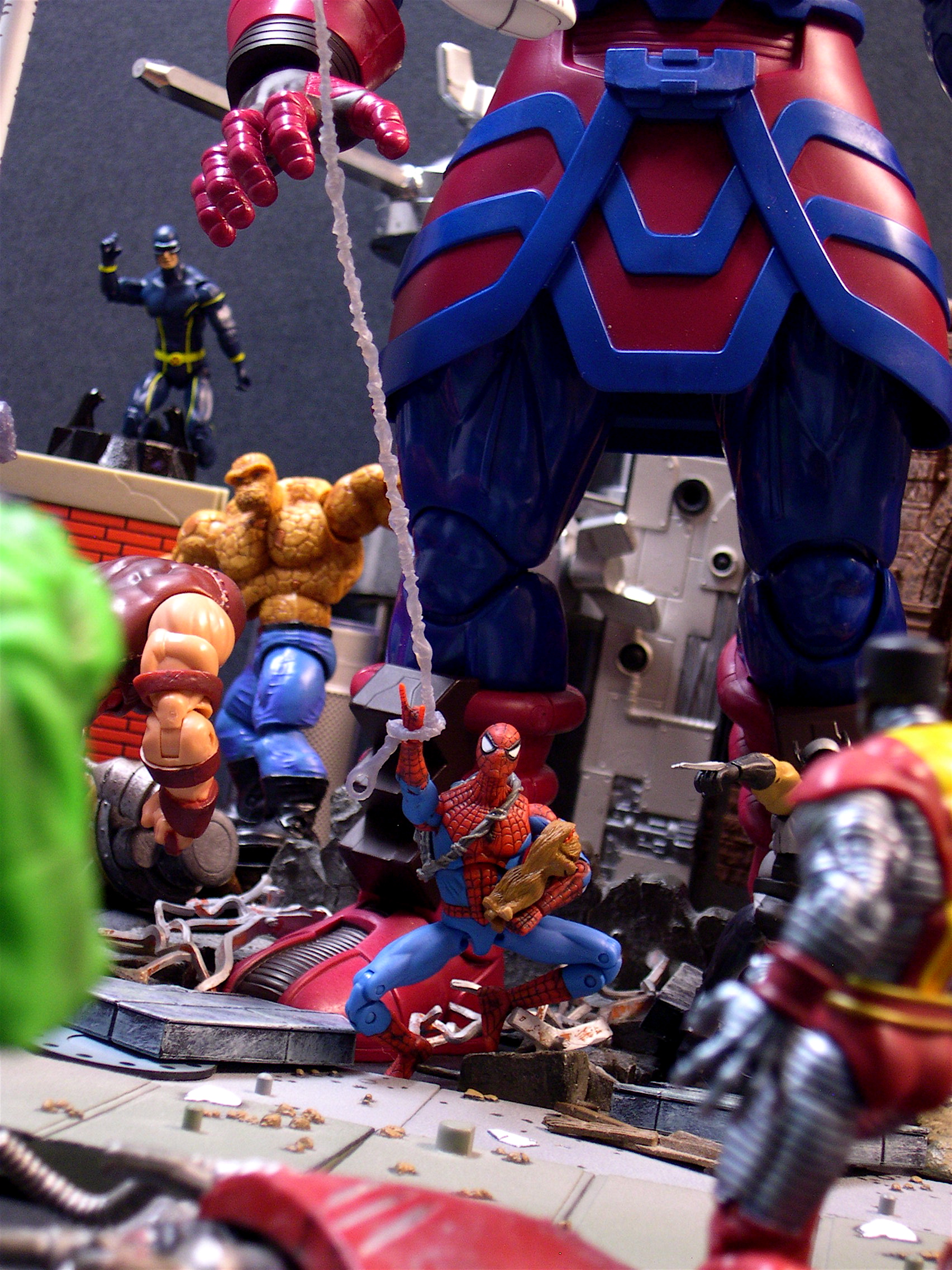