Last week’s Toy Fare #151 included an article on the upcoming Venture Bros. action figures and bobble heads from Bif Bang Pow!  Owner Jason Lenzi has it reprinted on the BBP blog, and I wanted to share it with you.

This morning, poster Jr. on RTM’s Toy Buzz posted seeing an Adult Swim Bump revealing that wave 1 of the action figures would include Hank, Dean, Rusty, Brock, and the Monarch.  This is a bit at odds with what Lenzi said in the Toy Fare interview about mixing in obscure characters, so I’ll look for some confirmation on this.

If Venture has a name, it must be Bif Bang Pow!

You have no idea how long I’ve been waiting to use that tag line.

Greetings and salutations to all Bif Bang Pow! followers and believers of all shapes, ages and sizes! Well, as you’ve probably heard by now, we did it! Once again, we’re bringing the people what we KNEW they always needed, toys for ‘The Venture Brothers’! (If this keeps up, we’ll finally give the world the James Bond action figure and vehicle line it’s been dreaming of).

And just to prove this isn’t some internet rumor, we even went as far as having the news printed in a magazine! Yes, the new issue of action figure bible Toy Fare Magazine hit the stands today (Issue #151), and in it you’ll find an informative, witty and at times heartwarming interview with yours truly, which somehow manages to make me seem like I know what I’m talking about too! Pick it up, I dare ya, and see if I’m lying! Go on! 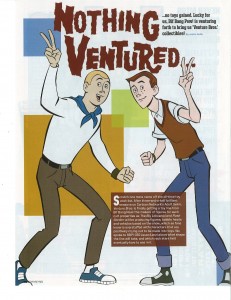 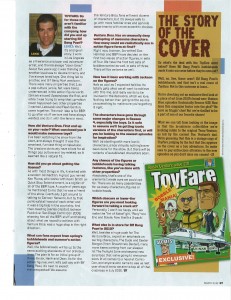 Truthfully, we have to admit to a bit of satisfaction when the news first broke, because for the first time in a long time, it was broken by a magazine. Not a website, not a blog, but a good old fashioned magazine, the way it used to be. And isn’t that what we’re all aiming for anyway? To take things back to the way they used to be? To have cool toys, for properties you never thought would get ’em, to get scoops from our ‘secret handshake’ magazines, and to be knocked out by season ending cliffhangers without spoilers? The world moves awfully fast, as someone smarter than me once said, and we here at Bif Bang Pow! recognize that. So we take our time, play it cool, and then try and knock you out. Please, won’t you join us on this AdVenture? It’s gonna be sooooo cool….