Hasbro has announced a mail-away promotion for an exclusive Transformers Ravage figure.  The redemption form and one redemption sticker come with the N.E.S.T. Alliance Pack.  Then collect two more stickers from specially marked Transformers products, and you’ll be able to send your redemption form in with $4.95 shipping and handling for the special edition Ravage.  The promotion ends April 30.

The Transformers Adventure Continues As Hasbro Invites Kids To Join The AUTOBOTS And The Elite N.E.S.T. Team 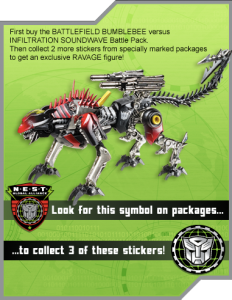 Pawtucket, RI – February 1, 2009 – Hasbro, Inc. (NYSE: HAS) announced today the start of a special promotion for its popular TRANSFORMERS toy line and is inviting kids and fans to “Join the N.E.S.T. GLOBAL ALLIANCE.” BUMBLEBEE and the AUTOBOTS, the heroic protectors of Earth, need help from their human allies as the planet continues to face the threat of the evil DECEPTICONS.

N.E.S.T., a secret partnership between the AUTOBOTS and humans dedicated to stopping the DECEPTICONS, was most recently featured in the blockbuster movie TRANSFORMERS: REVENGE OF THE FALLEN. Now, by collecting three different stickers included in specially marked TRANSFORMERS products available this spring, kids and fans can join the N.E.S.T GLOBAL ALLIANCE and mail away for a special edition RAVAGE figure not available anywhere else.

Additional stickers are available in specially marked TRANSFORMERS toys at retailers nationwide. Once the necessary three stickers have been collected and placed onto the N.E.S.T. GLOBAL ALLIANCE Redemption form, consumers mail them away to receive their special edition RAVAGE figure. The promotion requires a payment of $4.95 for shipping and handling charges to receive the special edition figure and the offer is good while supplies last. Requests must be postmarked by April 30 and received by May 14.

For more N.E.S.T. action fans can watch online webisodes of “Cyber Missions,” featuring new TRANSFORMERS adventures. “Cyber Missions” finds the AUTOBOTS working with humans in the N.E.S.T. global alliance to defend Earth against the revenge-seeking DECEPTICONS. There will be 12 webisodes total which began airing online at www.TRANSFORMERS.com in early January and new webisodes will continue to air throughout the year.

To learn more about the special promotion visit www.TRANSFORMERS.com.