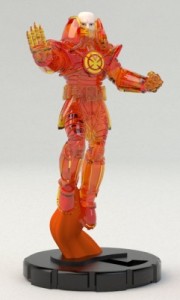 Since childhood, Lex Luthor refused to let anything stand between him and what he desired. Though born to wealth and status, Luthor wanted always wanted more, building a path to power paved with suspicions, accusations, and corpses. In the Blackest Night, Luthor refused to aid past allies and strived  only to save himself and what belonged to him–proving himself the perfect candidate for a greed-fueled orange power ring!

The DC HeroClix Blackest Night Starter Game will be in comic and hobby stores on May 12, 2010. The Starter Game includes everything you need to play HeroClix: seven HeroClix figures, the 2010 HeroClix Rulebook, a map (The Oan Sciencells) and more – reserve your copy at your local retailer!