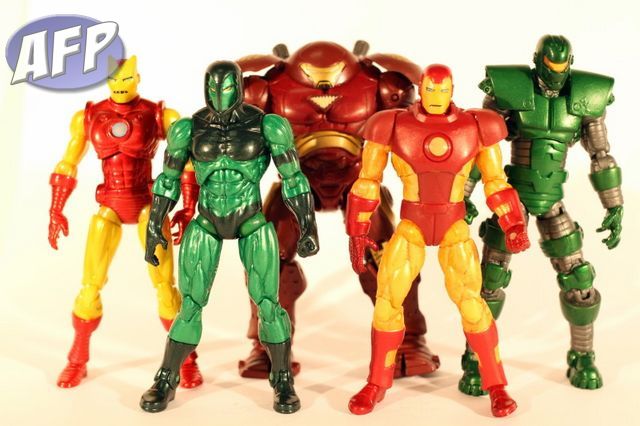 Iron Man is without a doubt my favorite comic book character. I own every issue of his several series going all the way back to Tales of Suspense #39. So when Hasbro announced a series of comic book-based action figures to run concurrently with the Iron Man 2 product, I was in heaven. It’s an idea that Hasbro mistakenly bypassed during the first Iron Man movie. But they’re learning, right?

The first wave of comic-based figures arrived in early March. Just this week, the second wave landed, and it’s just as stellar. 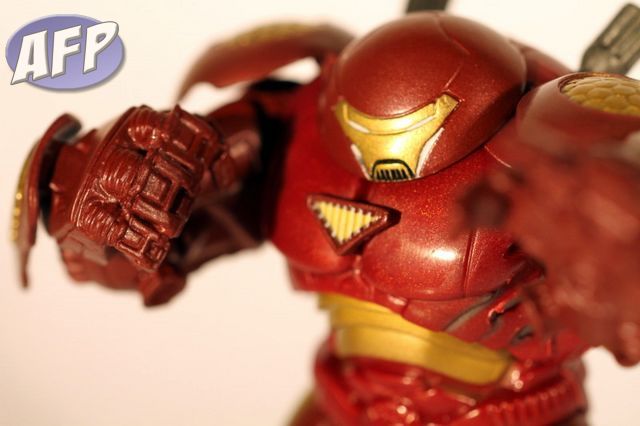 Designed to take down the Hulk, this armor is far bulkier than standard IM armor in order to pack that extra power needed to fight the Bruce Banner’s alter ego. The sculpt has plently of detail from little turbines on the back to muscle striations on the fingers to the honeycomb solar panels on the shoulder armor.

Articulation is the standard for this line: cut head, ball shoulders, ball elbows, swivel wrists, ball torso, ball and swivel hips, double-knees, and ball ankles. There’s a great range of motion across the board. (note: Of the two HBs I opened, both have the right forearm rotated the wrong way. It takes a bit of effort to rotate it properly due to some Frankenstein bolts/exhausts that are blocked from rotating due to overhanging elbow armor.)

The red paint is only slightly metallic and darker than I would have liked. Small complaints, though. He’s about the same size as the Marvel Universe Hulk figures and quite a bit more massive than typical Universe or Iron Man figures. Overall, this is a fantastic figure which will likely be highly sought-after by fans. 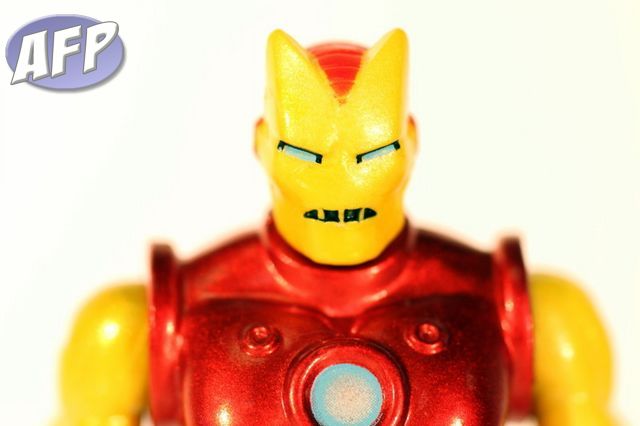 He’s simply called Iron Man on the packaging. Basically, it’s the same figure as Wave 1’s Classic Iron Man. However, this time he’s got the pointed mask which Steve Ditko first drew. The head’s got a nice grill pattern to the mouth and just looks quite menacing. The lower torso has also been changed to reflect this armor’s lack of hip-disc batteries. A cool figure, if not really needed, especially if you already have Wave 1’s Classic Iron Man. 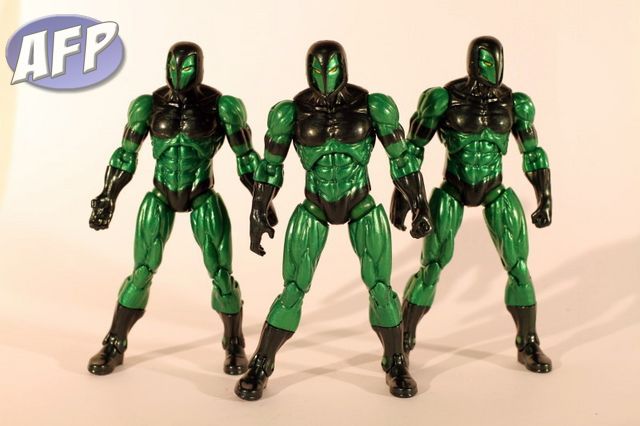 I’ve never been a huge fan of Guardsman as a character. However, I do love the idea of Guardsman Vault guards. Therefore, Guardsman is the first potential army-builder for this line. The first thing that strikes you about this figure is the sharp, metallic green.

The sculpt is nicely detailed (he’s got quite the six-pack) and features plenty of muscle definition. The upper thighs stick out a bit farther than the hip balls which appear undersized. However, they function properly and look fine when action-posed. Articulation is once again standard for the line. This time the wrist and ankle swivels are at the boot/glove lines.

I understand the desire to hide the joints this way, but it backfires in a small way. When the hands or feet are rotated, the muscle sculpts don’t line up. I think having the joints at the actual wrist and ankle would maintain the muscle sculpts better. A small point, though. The torso movement other than rotating is a little limited. 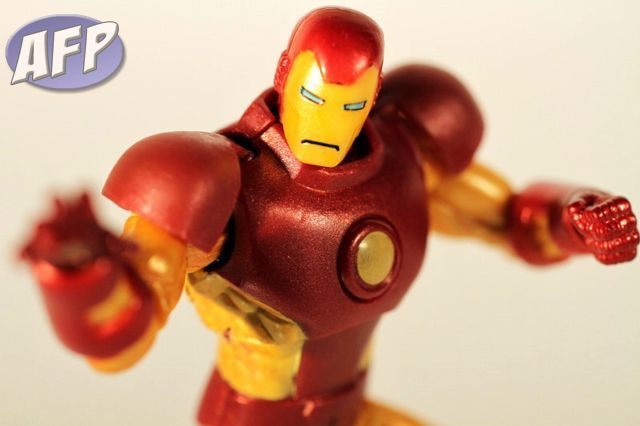 Another adjectiveless Iron Man in this wave, so look for the figure’s number to help identify it on pegs. This has always been one of my favorite armors. The Silver Centurion armor jumpstarted my hardcore collecting of Iron Man comics, and the Neo-Classic was its follow-up. Part of the appeal of this armor is it appears to be a bulked-up version of the Classic armor. This figure nicely reflects that idea. Body-wise, they’re similar in size, but the torso and shoulder pads add much width.

The pads are on hinges much like Wave 1’s War Machine. I’m not a fan of this style of securing the pads. They can look funky when the arms are raised forward. I think it would have been better to incorporate them into the sculpt of the upper arms. He has standard articulation for this line. The torso twists fine, has some side-to-side motion, and leans back. The forward motion is non-existent, though.

Like the Hulkbuster, this figure features slightly-metallic, dark red paint. The gold is much darker than the classic and has a reddish wash giving it an almost burnished appearance. One final note is the lack of a specific bio for this armor on the back of the card. Instead, it simply talks about Tony Stark being Iron Man. It would have been nice to see a few details about the armor. I’ve been waiting for a good version of this armor for quite a while. Toy Biz’s Showdown figure was okay, but this version is far bulkier and solid. Another major addition to the Iron Man armory. 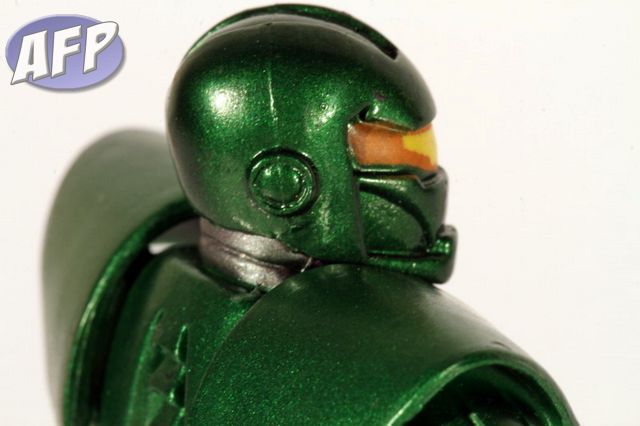 Another classic Iron Man villain and often partner/teammate of Wave 1’s Crimson Dynamo. While I would have preferred the retro/classic, oversized version of Titanium Man (it would have been a nice change-up size-wise for the villains so far released), I understand the desire to give Titanium Man a more modern look.

This version is slightly taller than Crimson Dynamo and noticeably taller than the regular Iron Man figures. He’s got standard articulation, but once again, any forward/crunching movement for the torso is limited.

His green is slightly-metallic and not as eye-popping as Guardsman. His visor, hand repulsors, and boot jets all have a two-color paint app (orange outside with yellow inside) which go miles to make the figure pop a bit. He’s a fantastic figure and a worthy adversary for Iron Man.

Overall, this is an outstanding wave. Once it was revealed at Toy Fair, it became my most anticipated wave of figures revealed so far this year. Two fantastic Iron Man armors and two villains (one of which can be an army-builder good guy) in one wave. I eagerly await the third wave of the Comic Series which should be out sometime this summer. Hopefully, a fourth wave is revealed at the San Diego Comic-Con. I can see the Comic Series of Iron Man figures having some legs and lasting into next spring before emphasis shifts to Thor. 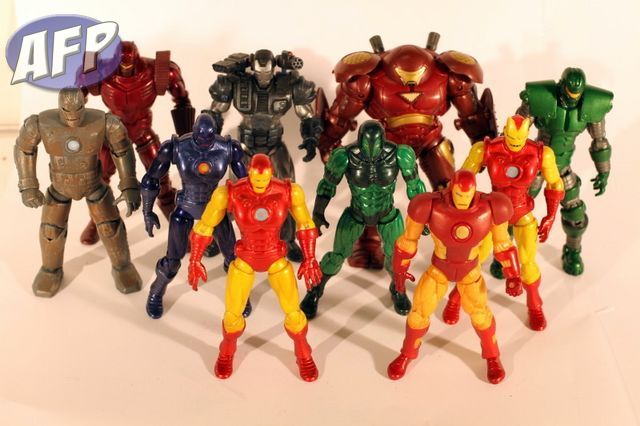