We may be running an Iron Mania week here at AFP, but at Marvel, the entire month of May is devoted to Iron Man.

We’re celebrating the May 7 (April 28 internationally) release of “Iron Man 2” with Iron Man Month 2010! Get ready for a monthlong mega mix of all things Shellhead right here on Marvel.com!

For this week’s Take 10, Marvel highlights ten of their favorite Iron Man action figures of all time.

Every week, a secret cabal of Marvel staffers gathers to discuss the best of the best when it comes to the House of Ideas.

I’m wondering how Samurai Armor Iron Man made the list, but I suppose it fits the bill better than Fisherman Spider-Man would fit a top ten list of Spidey figures.

This week we’re focusing on Iron Man’s many action figures, from classic Mego to current movie-based toys. And because there’ve been some wickedly cool War Machine figures over the years, we’re including James Rhodes’ toys in our list.

Now, these aren’t necessarily the best toys out there, these 10 just happen to be some of our favorites. As always, these picks reflect the personal choices of the Secret Cabal, not the official opinion of Marvel or Marvel.com, and can be considered subjective at best. Enjoy!

The very first Iron Man action figure, this 8-inch tall Mego sported plastic gauntlets, boots and belt to keep his cloth costume in place. Like many of his fellow Megos, Iron Man–who debuted in 1975–didn’t come with any unwearable accessories, but made an indelible impression on fans for years. In fact, it was nearly 10 years until the Secret Wars toy line came along to update the character’s plastic presence.

Back in the early ’80s it was common for a toy line to launch along with a cartoon or film tie-in, but Mattel broke new ground in 1984 when they launched the Secret Wars action figure line based on the 12-issue series of the same name by Jim Shooter, Mike Zeck and Bob Layton. The line is well-regarded for its good-for-the-era representations of characters, fun vehicles and the lenticular shields that came with each figure revealing their secret identity. Don’t give them too hard of a time for inaccurately stating that Tony Stark wore the armor during SECRET WARS when it was really James Rhodes.

To coincide with the “Iron Man” animated series which ran from 1994 to 1996, Toy Biz put out four waves of figures based on Iron Man and his many armors, villains and his compatriots–essentially the members ofForce Works. Aimed squarely at kids instead of collectors like most of today’s toy lines, the Iron Man figures combined snap-on armor with spring loaded weapons and crazy concepts. Take Samurai Armor Iron Man here for instance. It’s over-the-top for sure, but that doesn’t mean seeing an Iron Man with swords sticking out of his arms isn’t a ton of fun. 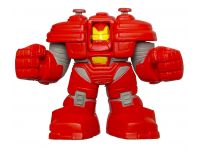 For an armor that has only made a handful of appearance in the comics, Iron Man’s Hulkbuster suit has earned a healthy representation in action figure form. This version comes from WORLD WAR HULK, in which Iron Man created an updated version of the armor to take on a very angry, world-conquering Hulk. The cartoony Super Hero Squad figures, which have spawned comics, comic strips, video games, animated series and more, don’t have a lot of articulation, but those bright, shining faces make pairing Hulk with Hulkbuster Iron Man in a 2-pack fun for the whole family.

Currently a Toys “R” Us exclusive, this War Machine Mighty Mugg–based on designs from “Iron Man 2”–rocks socks off for many different reasons. For one, unlike the other Iron Man Muggs around, this one comes with twin cannons for extra destructive capability. Another lies in the impressive detail the toy makers can achieve with just a few colors and lines on a body that’s mostly uniform throughout the entire line. 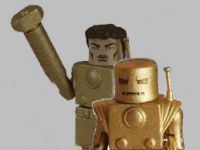 Diamond Select Toys and Art Asylumhave given fans just about every version of Iron Man they could hope for thanks to the Minimates line, but one stands heads and sledge hammer arms above the rest: the Gold Iron Man ‘mate from the AVENGERS #1 box set. Aside from being able to strip Shellhead down to his Tony Stark identity, fans can also add the sledgehammer arm Iron Man sported in earliest issues of AVENGERS. There’s nothing like a new high-tech version of an old, crude instrument.

The Marvel Select line has a reputation for producing figures specifically for collectors that reflect what’s going on in the comics at that time. Take this 6-inch Ultimate Iron Man figure, for example. The toy expertly recreates the armor from the Ultimate universe, which fans know, involves a lot more than Tony Stark opening a briefcase or thinking his armor into action. It takes a whole team to keep this armor in action, but only one person to play with.

Toy Biz revolutionized the action figure market when they launched the 6-inch Marvel Legends line back in 2002. By offering up better articulation and sculpting than anyone else, the Legends quickly became the hallmark which all other figures were measured against. The Silver Centurion armor–which made its debut in IRON MAN #200-stands as a perfect example of their skills. He looks like he fell right off the comic page, the mask flips open to reveal a right-on comic book likeness and that giant rocket pack makes for an awesome accessory. 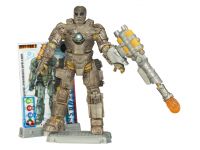 Who wasn’t blown away by “Iron Man” when it hit theaters in 2008? Director Jon Favreau did an amazing job of taking a character with decades of comic book history, boiling that down and creating a movie that everyone from die-hard fans to grandparents could enjoy. One of the more impressive feats came through designing an initial armor that looked like Stark really could make it in a cave in the Middle East. When Hasbro shrunk down the figures from the original movie’s 6-inch line into the 3 3/4-inch line for “Iron Man 2,” they didn’t lose any of the amazing detail on the Iron Man Mark I figure, which means it packs a heckuva punch in such a small package. 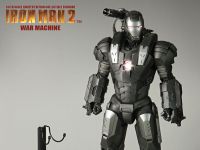 From tiny titans to massive Marvels, Hong Kong’s Hot Toys nails their subjects with accuracy and exquisite detail. So naturally, their take on War Machine as portrayed by Don Cheadle in “Iron Man 2,” easily gains the top spot on the list. The War Machine armor might not be as powerful as Iron Man’s in theory, but it just looks so cool with all of the guns and rocket launchers, especially when standing 12-inches tall and looking exactly like Cheadle. The figure hasn’t technically come out yet, but we’ve seen prototypes and this one promises to be not only one of the coolest Iron Man figures of all time, but one of our favorite toys ever.