The Green Hornet (and Kato, of course) is more my older brother’s thing than mine – I hadn’t been born yet when it was on the air, and the Batman TV series got a lot more airtime in replays. Although produced by the same team, the Green Hornet played it straight while Batman camped it up – so I’ll have to find out how my brother feels about Seth Rogen in the role.

In any case, the toys are coming. These are the 12-inchers, and I’m not sure if Mezco will also be making ones that fit in with the 7-inch scale that’s prevalent for movie properties.

Mezco 12inch 1/6th scale figures are based on the characters from the upcoming big budget tent pole film from Sony Pictures. The Green Hornet, due to release January 2011. A classic character of film, television, radio, and comic books returns to the big screen in Columbia Pictures’ feature film The Green Hornet, starring Seth Rogen as the vigilante crime-fighter. The film will be based upon “The Green Hornet” radio series created by George W. Trendle. 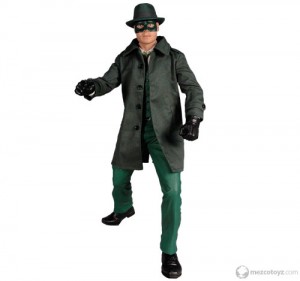 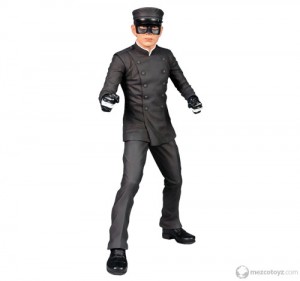 The 12 inch figures feature amazing attention to detail, perfectly capturing both the actor’s likenesses as well as the spirit of the characters.

Both figures are packaged in a collector friendly window box.

The Green hornet and Kato ship in November 2010 and are available for pre-order at http://www.mezcotoyz.com/store/detail.aspx?ID=862