Fwoosher moldie13 is back with a review of the recently released Hot Toys Whiplash from Iron Man 2. He previously reviewed the 3A Toys WWRp Armstrong 8-pack, making me wish I had the desert close by for some outdoor shots.

Big thanks to moldie for these pics and detailed review!

Over the past few years it’s been difficult to ignore the pull of the old twelve-inch scale market. As popular franchises get better and more detailed treatment, the collective bank accounts of action figure fiends across the globe groan under the weight of the threat. 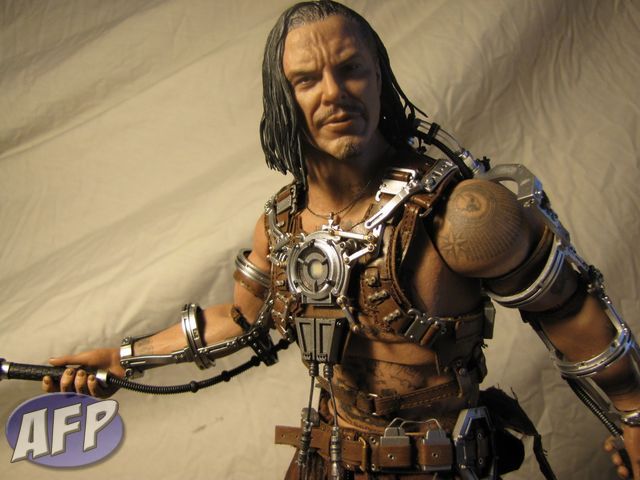 With its Iron Man 2 license, Hot Toys upped the ante with their Mark IV design and War Machine. They’re great, surely enough, but not my speed.

Enter Whiplash, the gruesome marvel incarnation of that slab of wreckage that is Mickey Rourke. 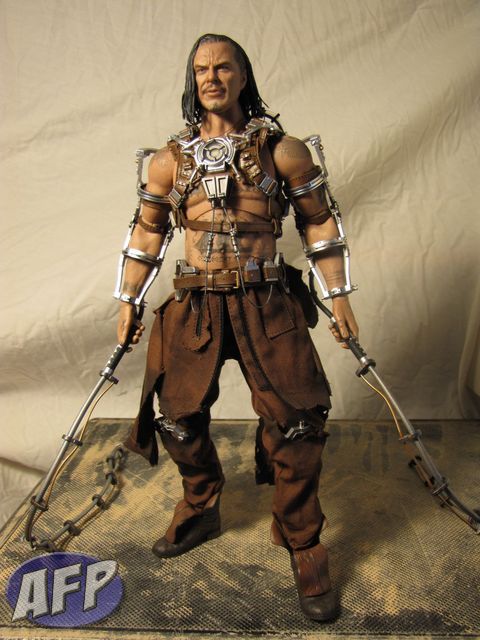 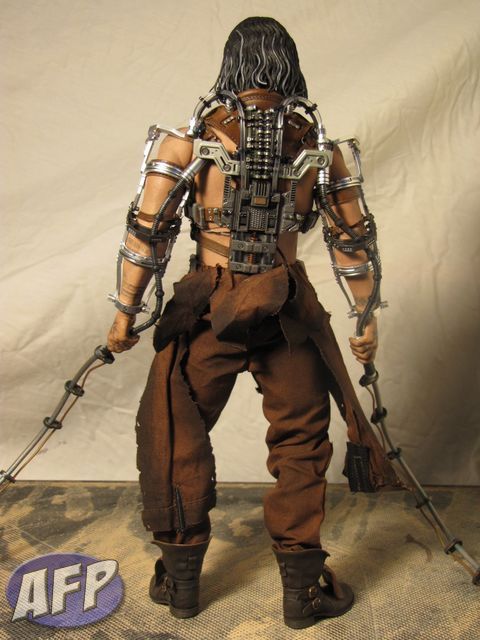 Hot Toys’ attention to detail spans every tiny aspect of figure making. We’ve become accustomed to scene accurate costume designs and various props replicated exactly only in one-sixth scale and in plastic. But with Whiplash, Hot Toys has entered and “owned” a new field of realism – the tattoos. 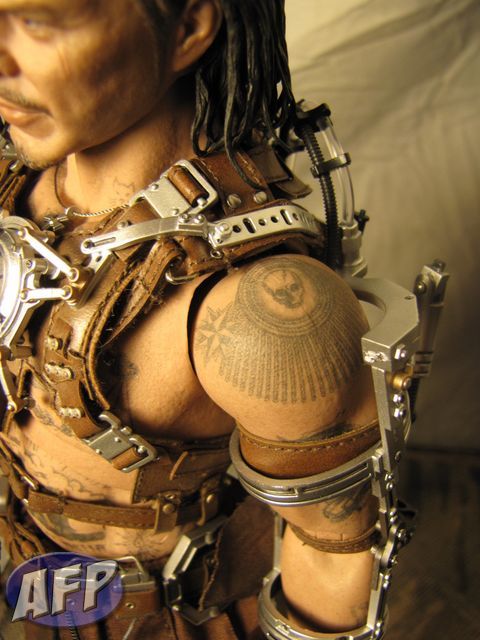 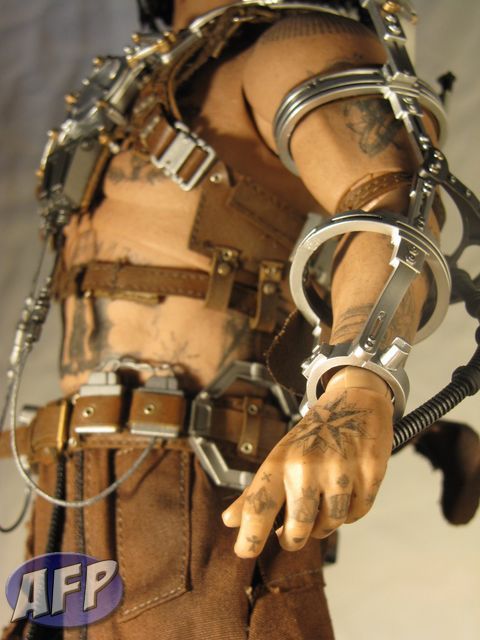 Everything about the figure stands out as high-quality, but the tattoos, a signature of the movie’s version of the character, are extremely detailed and extremely well done. They appear to be printed, as opposed to decals of some sort, but they’re done in something akin to “stipple printing,” where the image is composed of several tiny dots rather than lines. Whatever the method they used, it recreates the nature of tattoos extremely well, making them look slightly diffused from age, but extremely detailed all at once. 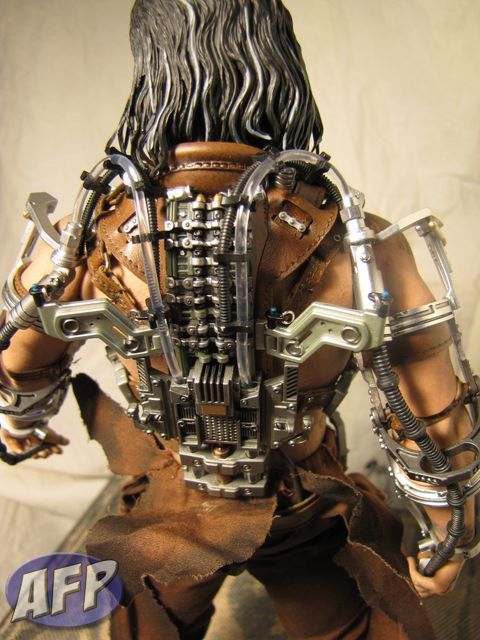 The whip-gear is amazing, and if you’ve spent much time around rigging gear or machine shops, you’ll recognize parts, scaled down, used in the creation of whiplash’s harness. The “leather” work is amazing as well, and the buckles and straps seem exactly the right scale.

Of course, it’s been pointed out that in the movie his jumpsuit’s orange, not brown, but Hot Toys has explained that the color, in this context, is a trademark of penitentiaries and can’t be licensed out or some such thing. Whatever – it’s not breaking my heart. 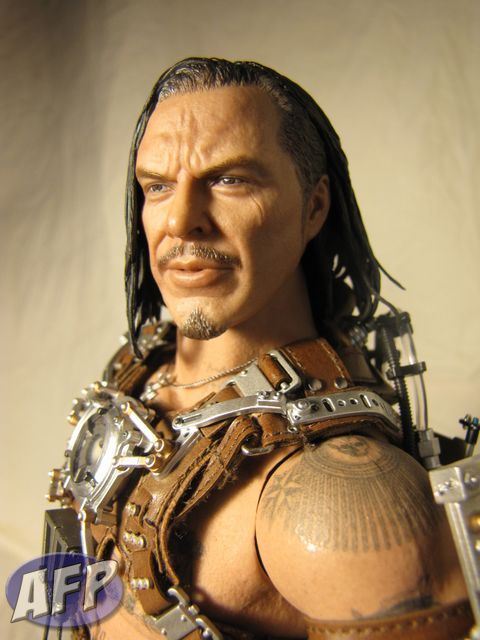 The facial likeness to Rourke’s not exact, but you’d be surprised at how close it seems from certain angles. And at least they got the squint right (I’m not letting it go, Hasbro!) The texture of the skin, across the whole figure (he’s got that rubberized outer body like the Wolverine figure), is just creepily well reproduced.

Overall an impressive figure of a creatively designed character. Extremely well made. We expect no less from Hot Toys. 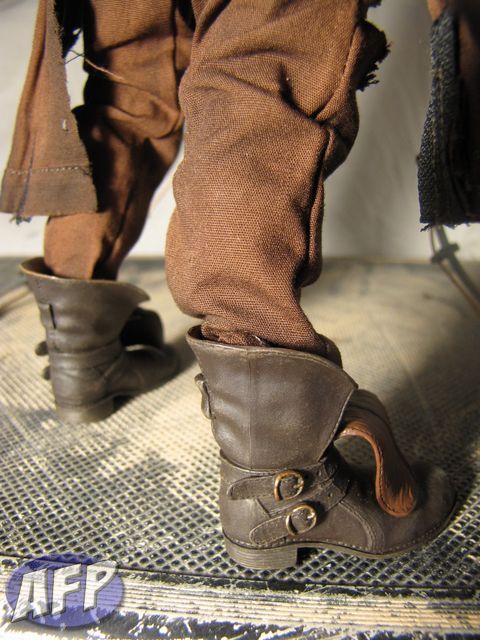