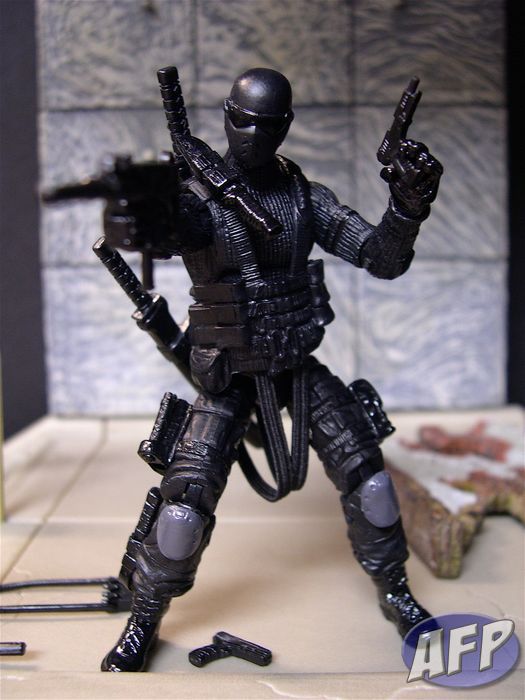 Welcome 2011!!! First up for a pic review this year is one real nice figure from the G.I. Joe: Pursuit of Cobra line — 2011 Wave 1 Snake Eyes! We’ve seen this figure on display at 2010’s Comic Con, and it quickly became one of my most anticipated figures from this line. It looked like it would surpass the 25th Anniversary Snake Eyes that we had a couple of years ago, let’s find out if it did! 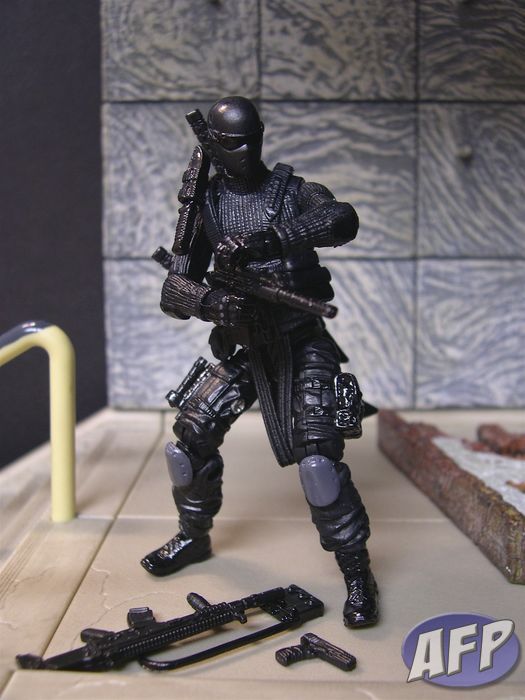 Snake Eyes shows up in this wave in his goggled, commando look, and I have to say this is the best version of this look I have ever seen. The headsculpt looks really good, and his body sculpt has a lot of different textures and small details. Add the plethora of accessories he has, I’d say this action figure is just pure win. 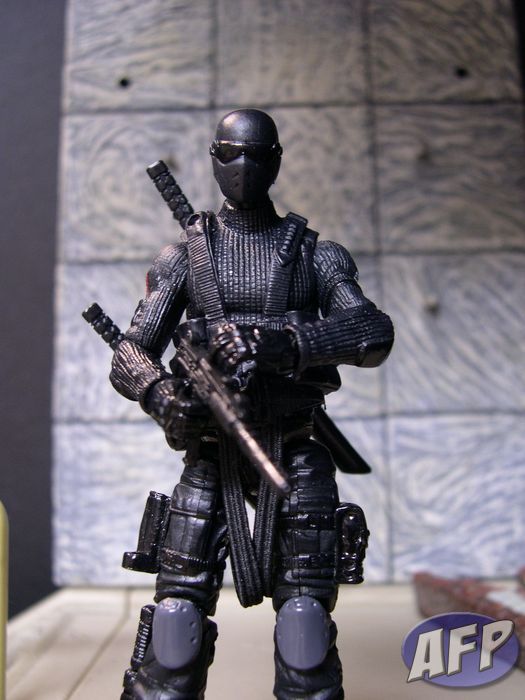 Let’s face it Snake Eyes has always been a cool character. A silent, ninja-commando who can just kick anybody’s ass, who wouldn’t love him? This figure exudes that same coolness. 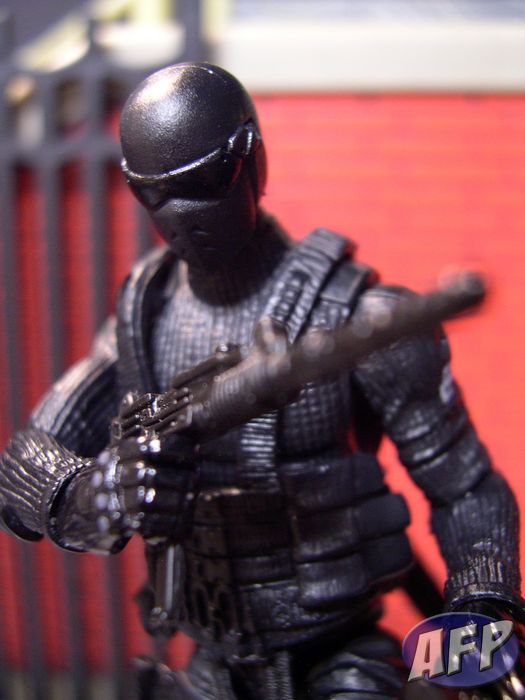 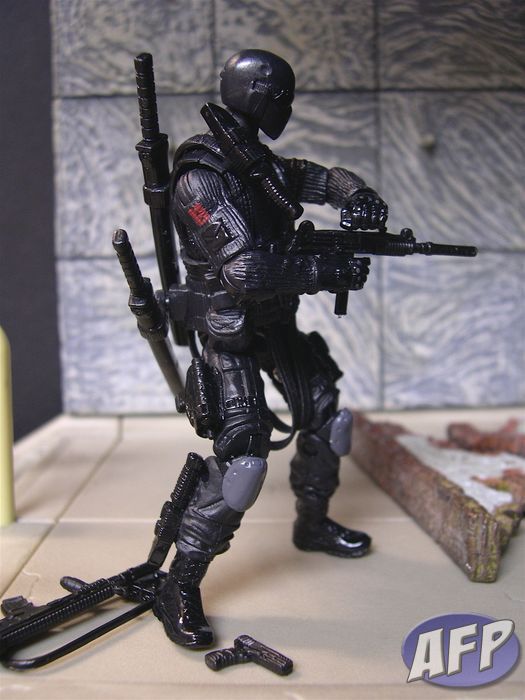 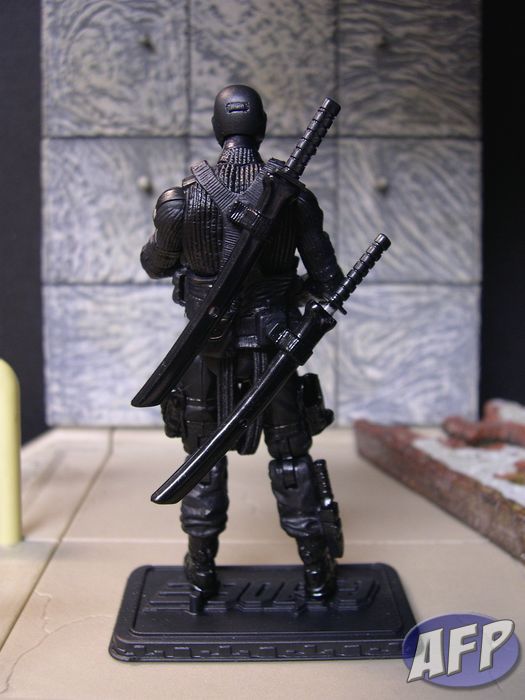 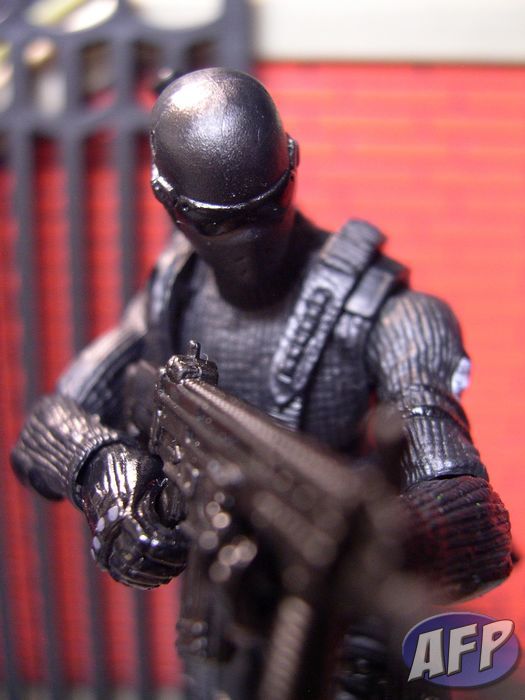 He’s taller than his 25th Anniversary version and Storm Shadow. I do like the proportions on these newer figures – you can see the difference when they’re side by side with the older versions. 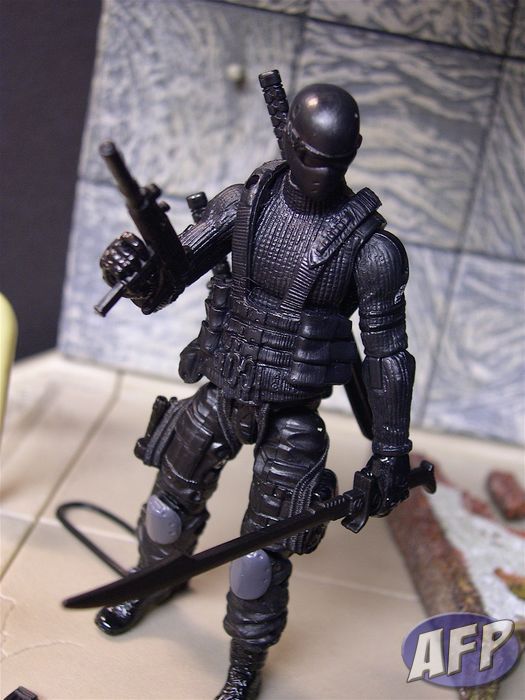 He’s got these two elastic bands hanging on his harness, which I don’t quite know what they’re for. It doesn’t bother me as much but some people might not like them just hanging there without purpose. I wrapped those elastic bands on his thigh pouch and holster too see if he looks better without them.

I’ve mentioned the wealth of accessories he has, and like most figures in this line they really loaded him up.

He’s got 2 handguns, an uzi, a machine gun, 2 silencers (which can attach to the uzi and the handgun), 3 swords (2 come with scabbards), and two knives. He’s also has an ammo satchel and the requisite figure stand. Oh and as I mentioned he has the alternate visored headsculpt. His harness can come off and so do his kneepads. 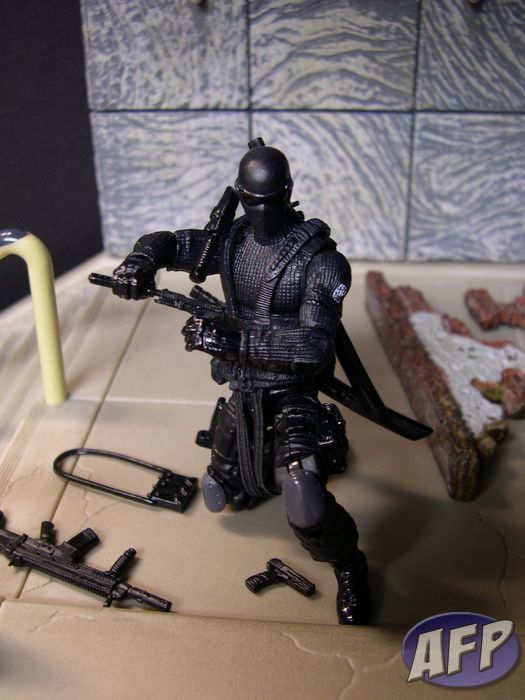 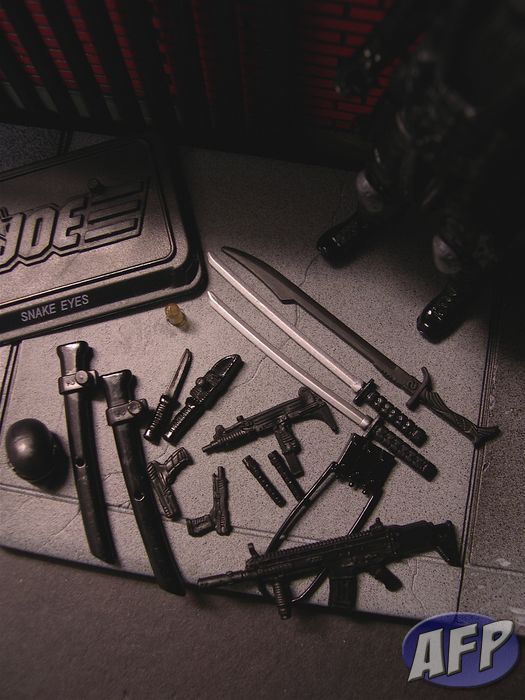 A couple of nitpicks on the accessories:

I’m not a big fan of the knife sheath on his shoulder, it’s a good thing that it is removable, if you prefer to display him without it. It will leave a small empty peg hole on his shoulder strap though.

Also, the ammo satchel strap is made of stiff plastic and it doesn’t quite hang right on Snake Eyes. I tried a couple of variations and I couldn’t get it to look good, so that particular accessory is staying off of him. 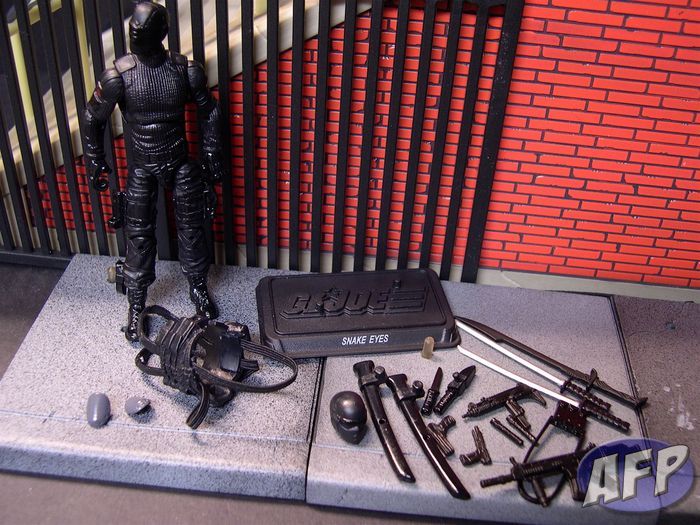 I’ve always liked Snake Eyes’ visored look but in this case I think his goggled look just looks more appropriate on this body. Having said that, it still does look cool when you put it on. 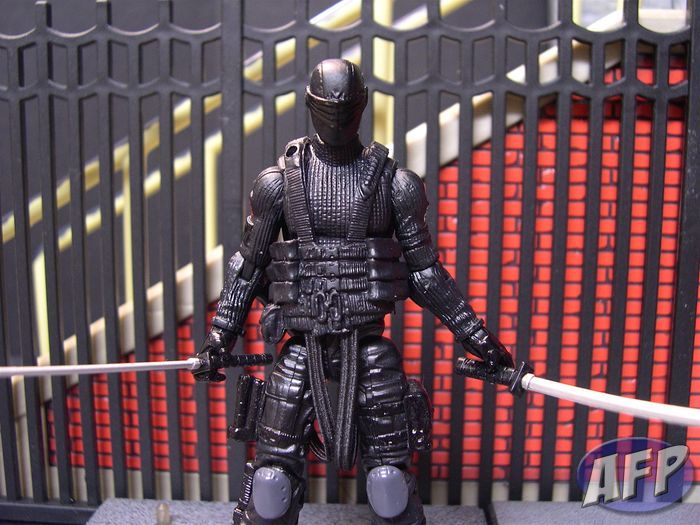 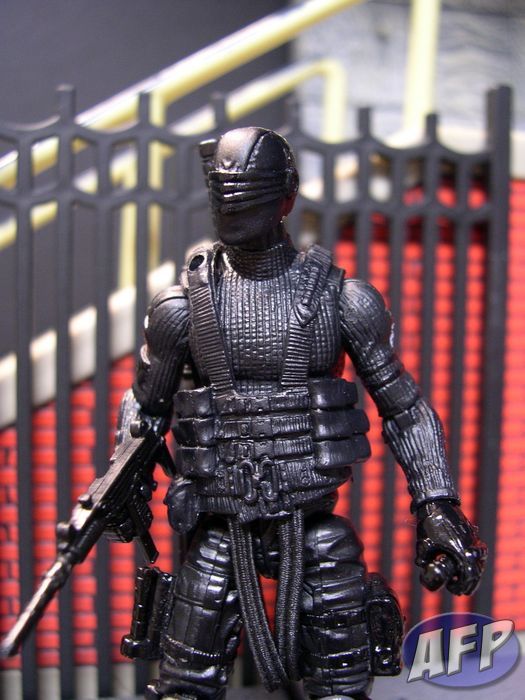 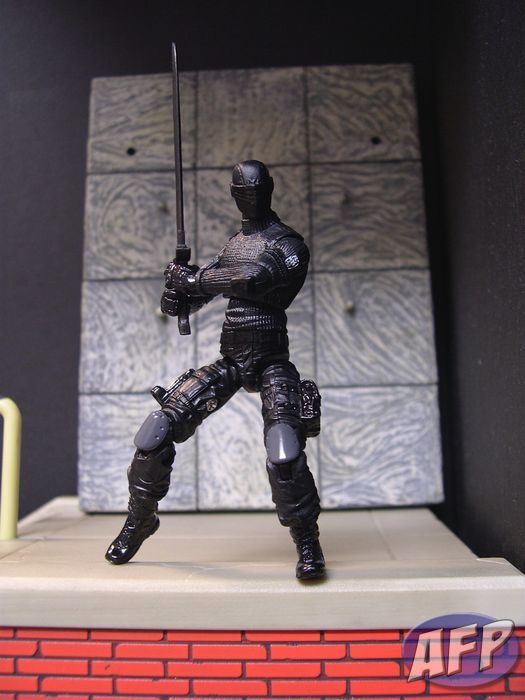 Articulation is the typical Joe articulation with one nice addition – wrist hinges. The hinges are on the sides of his wrists, very much like the Vintage Jedi Knight Luke Skywalker, so it adds some nice sword and gun-wielding poseability.

One thing that I wish Hasbro would incorporate on their base bodies are hip swivels. It would add sooo much to their poseability. I sure hope they are finding a way to design that in, like they have it in their MU line. Add in a neck hinge for looking up and down and you pretty much have perfect 3.75-inch Joe figures. 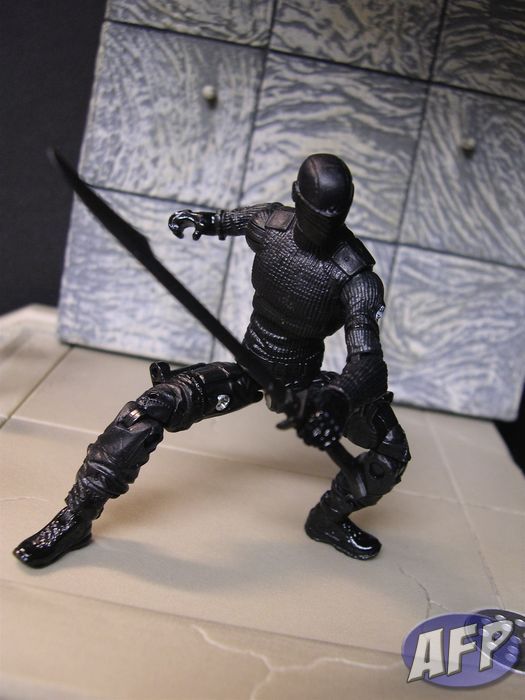 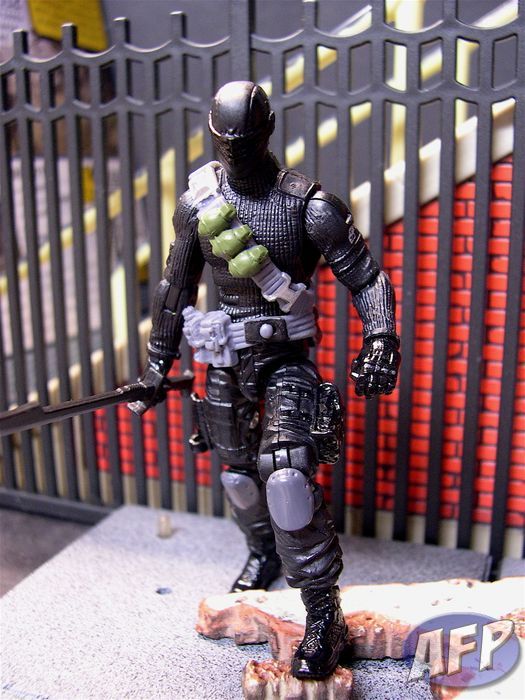 Here, I tried out 25th Anniversary’s grenade strap/belt on this Snake Eyes. It would probably look better if it was all black. 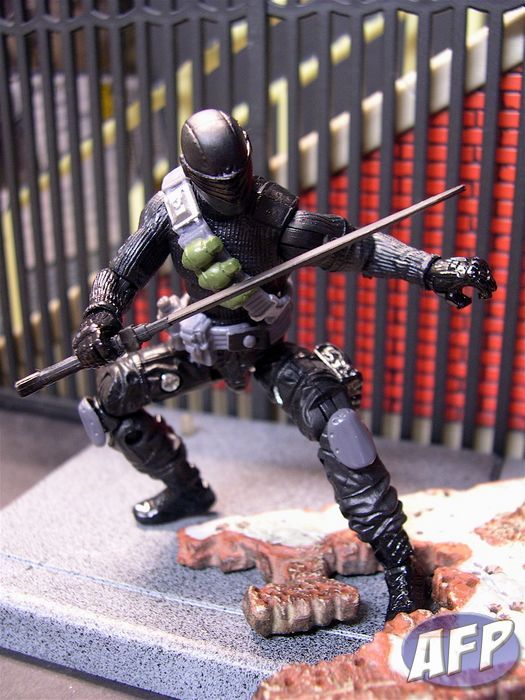 More pics comin’ at ya: 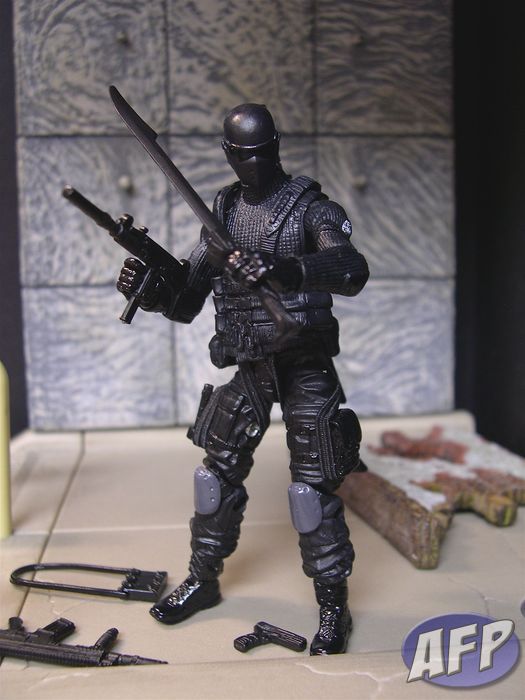 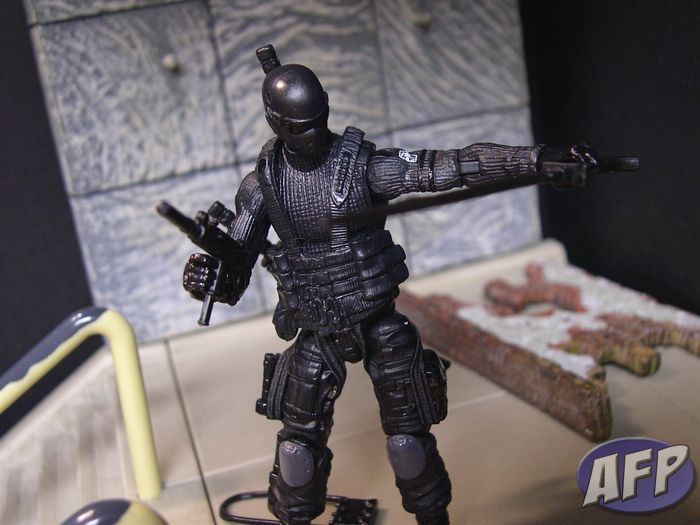 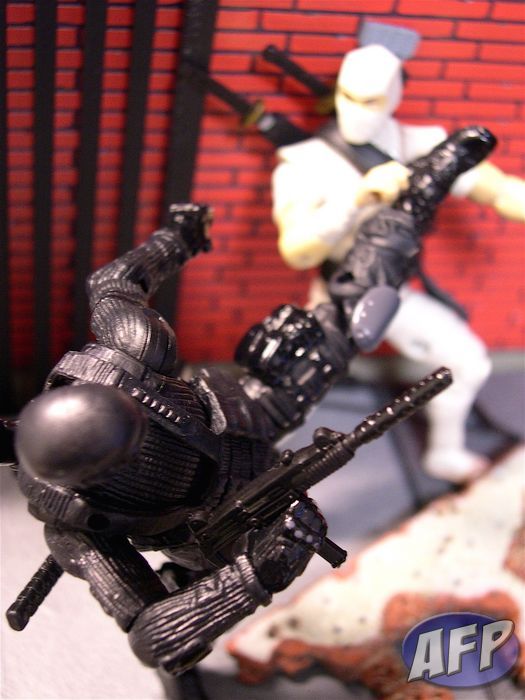 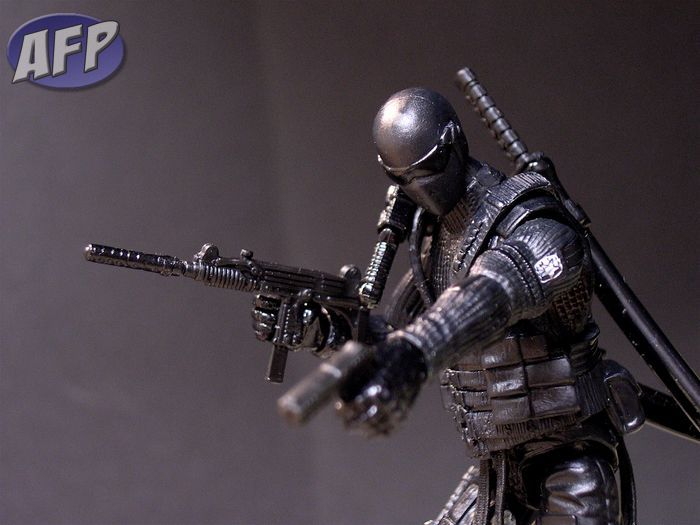 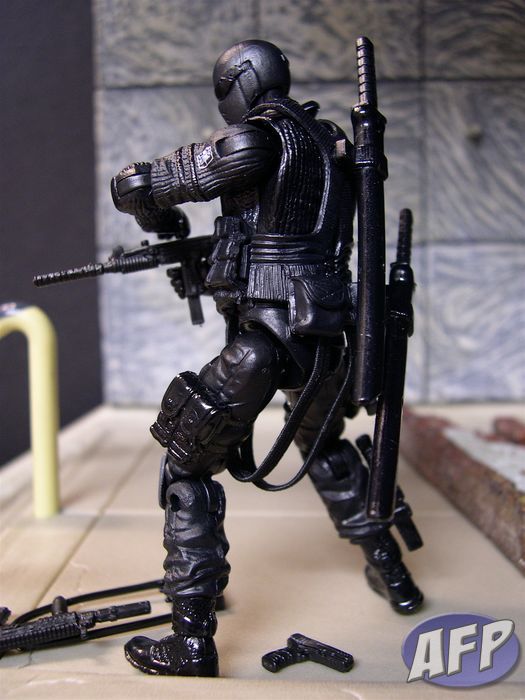 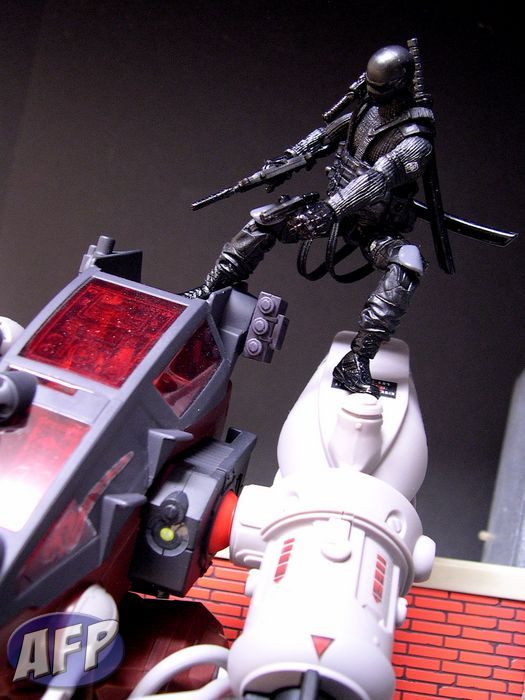 For me, this is the best version of Snake Eyes we have up to now. He’s got great sculpting all around, with some nice attention to detail. He’s got a nice array of accessories, and I’m happy I have a choice of whether to display him with his visored look or his goggled head.

Now if we can only get a Storm Shadow of the same level – so far I haven’t been impressed by the Storm Shadows that have come out of this line.

Well that’s it for now. I hope everyone had a nice holiday, thanks for looking, and I hope you all enjoyed the pics! 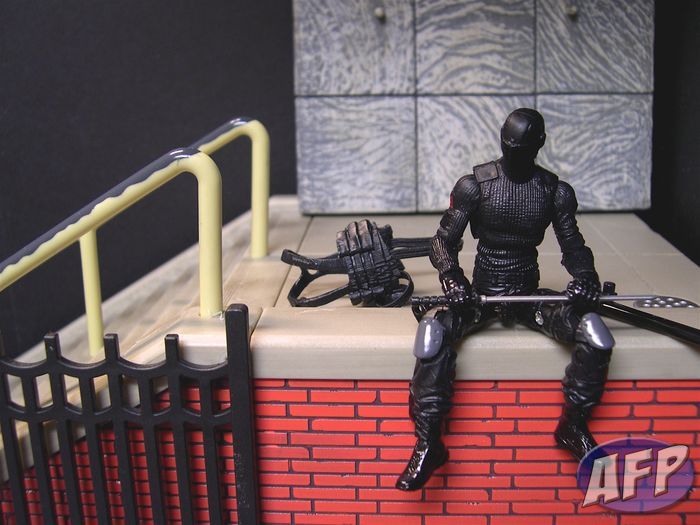