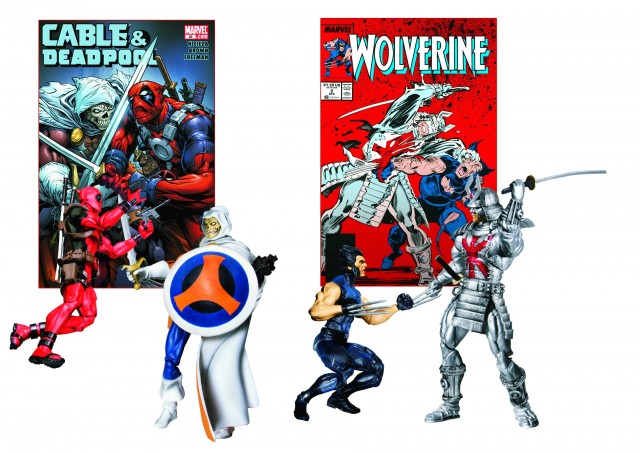 Last week we had such a great of posts from the guys here that I somehow missed the press image of the upcoming Marvel Universe 2-packs that showed up on hisstank.com forums. There’ll be two new 2-packs – one will feature Deadpool and Taskmaster, and the other the “Patch” incarnation of Wolverine and Silver Samurai.

The Silver Samurai looks so good I won’t even bat an eyelash at having to pick up another Wolverine, much less the totally irrelevant Patch that was one of the eye openers for me in the 90s that Marvel would do pretty much anything to get another Wolverine comic on the shelves.

As far as Deadpool and Taskmaster, I’ll probably pick this up too, despite Taskmaster being in his current (and throwback to the classic) costume instead of the superior UDON costume. And thanks to Gail Simone and Fabian Nicieza, I’m a die-hard Deadpool fan, even though his current solo title by Daniel Way is an abomination – so this gave me an excuse to compare this photo with the current Marvel Legends Deadpool and the 3.75-inch Deadpools that came out in the X-Men Origins: Wolverine line. I know – ML is 6-inches, but a lot of the Hasbro Marvel figures are designed digitally, so assets could be leveraged across different scales.

After that comparison, I’m convinced that this Deadpool figure is comprised of the original 3.75-incher that was single-packed in the X-Men Origins: Wolverine, with a new head, harness, and belt. The head looks like it may be derived from the new Marvel Legends head, but the flap in the back is different – so I may just be seeing things because I’m partial to how the ML head turned out.

The image is huge, so here’s a direct link to the pic that will load without the lightbox. Enjoy!