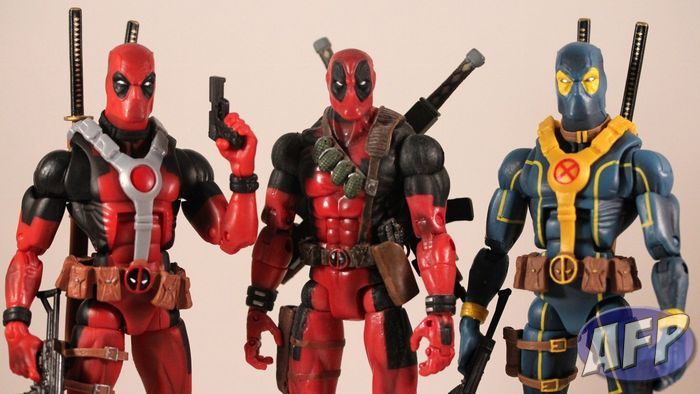 When Hasbro announced the winners of their Marvel Legends Fan’s Choice poll wayyyy back in August – and that’s 2009, not this year – there was a very polarized reaction. Cheering were the folks who never had the chance to pick up the original Marvel Legends Deadpool from wave 6 in the Toy Biz run. And jeering were the folks who may already have had Deadpool but were regardless upset that one of the few slots for Marvel Legends, which under Hasbro has been limited to a handful of 2-packs over the course of the past couple of years, was going to be used for a re-do.

I was lucky enough to find the highly coveted RedPool 2-pack recently and wanted to snap some pictures comparing the new figures with the original release. 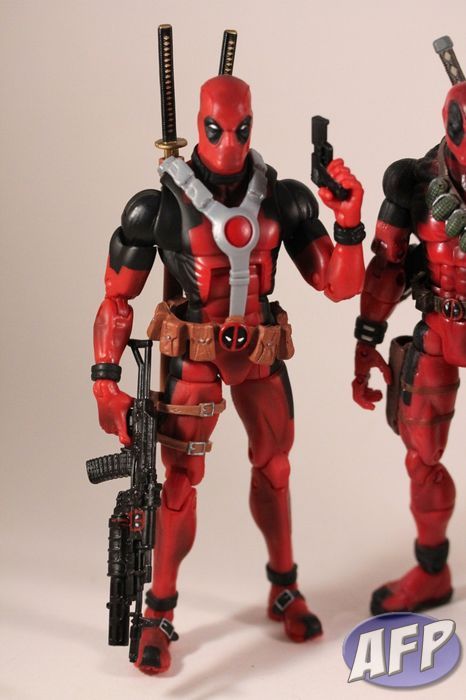 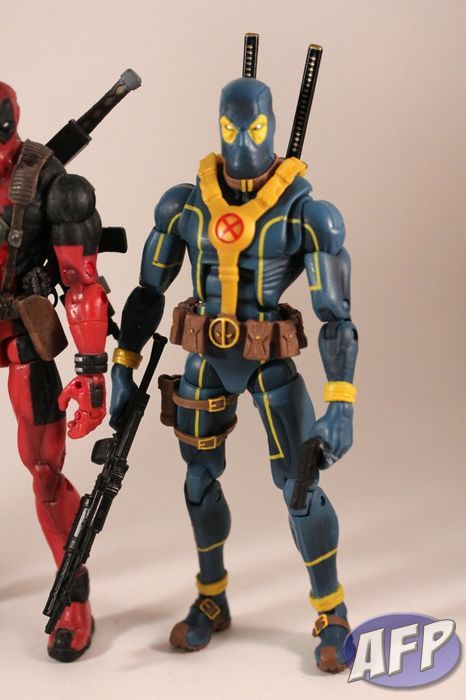 Before I get into the comparison shots, I have to admit that I’m breaking in a new camera (an early Christmas present to myself), and as this is my first foray into the world of DSLRs, I’m wondering if I should have stuck with my point and shoot – these things are pretty complicated! So, please forgive the white balance and noise in the shots. On the plus side, I’ve never gotten shots quite this clear without using a tripod before, so maybe there’s hope.

I had thought long ago, when the Marvel Legends Union Jack was released, that someone would eventually turn him into Deadpool – I was thinking about customizers, but I wasn’t too surprised when Hasbro did it themselves. The base body was mostly blank aside from wrist and ankle cuffs – and while those aren’t an exact match for Deadpool’s, they’re close enough. The head, neck strap, harness, and feet are new, and I believe were designed by Gentle Giant. The swords, pistol, and rifle I believe were all repurposed from previous 2-packs, but RedPool’s rifle has an added paint app of the Deadpool logo on the barrel – nice touch. 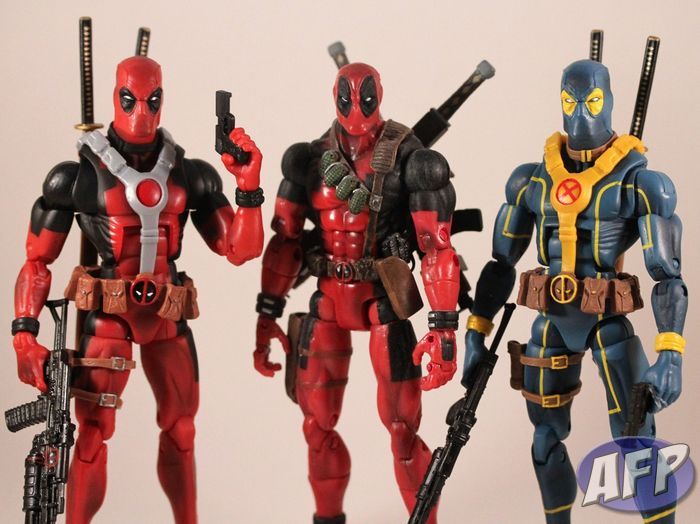 One more disclosure – I did some modifications to my Toy Biz Deadpool and don’t have a vanilla version – he’s got the GrownNerd  mod to fix the distended shoulders, and his harness was lengthened to let his belt sit a little lower on the waist. Thankfully, the Hasbro Deadpools don’t have the shoulder problems, but what’s weird is that they actually have two different harnesses. On the red version the belt sits very loose around the waist. The darker X-Men versions’s belt is not exactly snug on the waist, but it does fit better. A closer comparison shows that the red one’s version has more strap between pouches – so there must actually be two toolings for the harness, which I found odd. 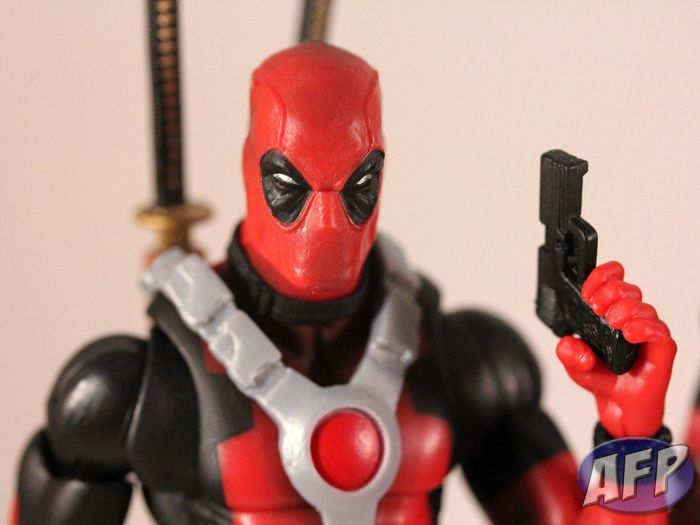 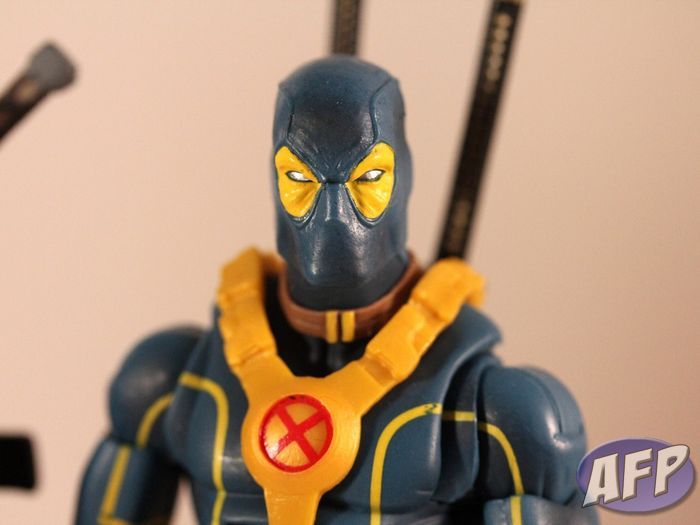 I am quite partial to the new head sculpt – it’s lifted straight out of Patrick Zircher’s run on Cable & Deadpool – as are both versions of the Deadpool costumes from this wave. It’s too bad that these figures didn’t come with alternate heads. I was a big fan of the unmasked Deadpool head from the Toy Biz version. Maybe Hasbro didn’t want to do the exact same thing as Toy Biz. If that were the case, I think they could have tried something different, like packing in a Zombie Deadpool head.

Some folks think the new head is too big – I’m in the camp that this one is just about right while the Toy Biz version was a little pin-headed – but this will be subject to your personal taste. 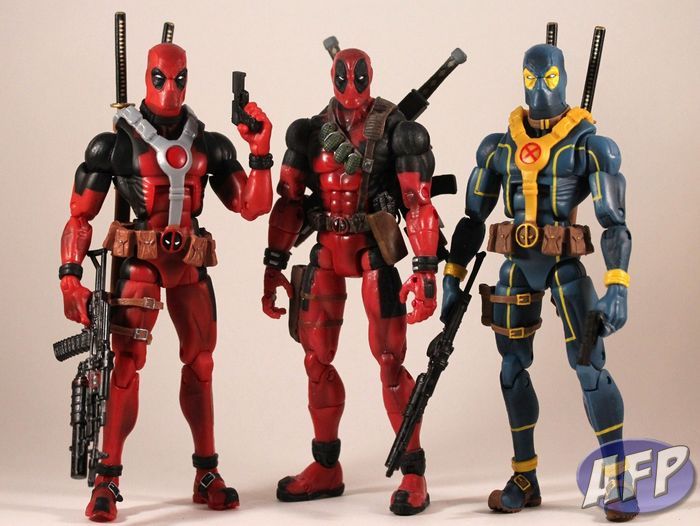 So there you have it – some pics of the new and slightly-modded original Deadpools. I like them all – I actually have another Toy Biz Deadpool that’s been modded into the UDON costume – but I will happily get rid of it now. I have a couple of spots I can put Deadpool in my display, but if push comes to shove, the new Hasbro Deadpool will be the one to stay. What about you?

Shopping note – judging by what I’ve seen at the Toys R Us locations that have these, RedPool and the X-Force Warpath are the hardest to find. The variant Deadpool in his one issue X-Men costume and red and blue Warpath are about on par with the  Winter Soldier / Black Widow 2-packs, and the 2-pack that will be easiest find is the Hulk / Valkyrie set. Check out Buzzy’s review of the Hulk to see why should pick him up.