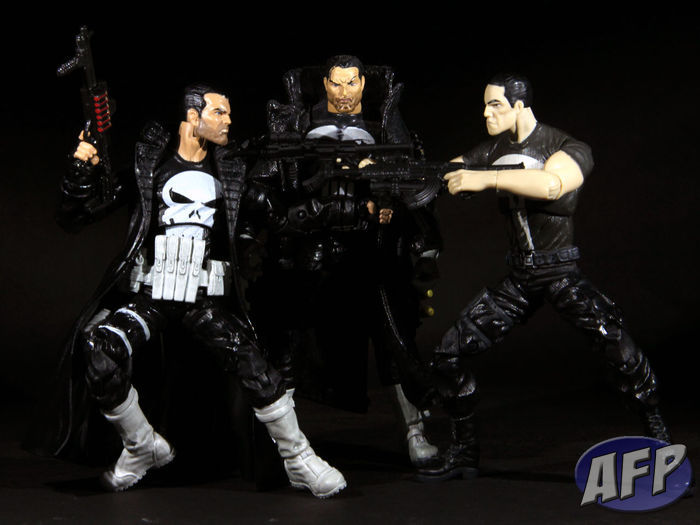 To be perfectly honest, I was hoping that I would get Blade in the set of Hasbro’s (Return of) Marvel Legends wave 3 that I pre-ordered. It’s not that this Punisher is a bad figure; on the contrary, it’s quite a good figure that’s also a dramatic improvement over the last Punisher that Hasbro made in Legends. It’s just that I’ve got enough Punishers to fill a 6-issue crossover between Uncanny X-Force (who meet the Punisher in the future), alternate reality hopping Exiles (who meet a version of Punisher in every dimension they visit), and a Punisher vs. Punisher one-shot (cause that’s at least two more Punishers). 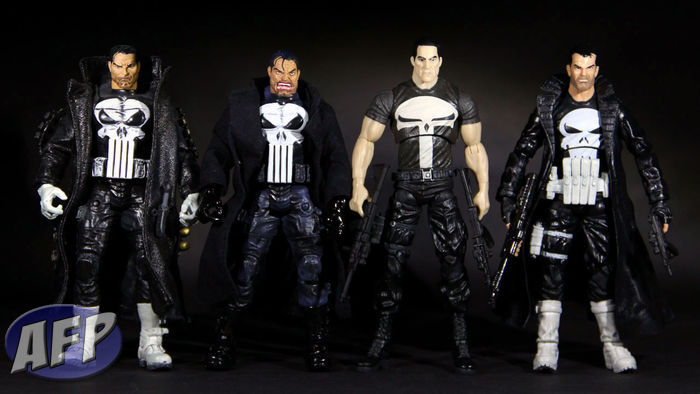 I still have a spot in my heart for the version that came out in Toy Biz Marvel Legends series 4. That was the first wave I found at retail, and old Frank still holds up pretty well to this day. He’s got a great head sculpt and the proportions fit him pretty well. Of course, Toy Biz reissued that figure quite a bit (contributing to my Punisher overload), including that unfortunate Big Mouth Billy Bass version. Some of the re-releases came with trench coats either of the cloth or pleather variety. My first Toy Biz Punisher got a pleather trench coat that I hunted down from an old Sting wrestling figure.

I couldn’t find my Face-Off 2-pack Punisher, even though Jigsaw was right where I was expecting to find them both. That figure spawned one of the bodies that is in heavy circulation now, but his head was really too small. And the first Hasbro Punisher – well, let’s just talk about what the latest one got right in comparison. Yeah, Frank is back, baby! His head sculpt didn’t get pinched in production, so his head is shaped pretty nicely. And it’s in proportion with his body, even if overall the whole thing is a little too slim for my taste. But in conjunction with actually painting some skin tone and stubble on that head, it’s really a huge difference.

It’s pretty amazing what those little things mean, because it’s pretty much the same base body underneath the rest of that, aside from the trench coat arms and different boots. The belt has an ammo pack overlay and of course there’s the trench coat that gets reused from Ultimate Nick Fury from earlier in Hasbro’s run. It all works together pretty well, even though I prefer the look without the trench. I’m tempted to see if I could use the t-shirted arms of the previous Hasbro Punisher as a replacement on the new Hasbro Punisher and lose the trench – but of course, old Hasbro Punisher didn’t have bicep swivels, so that’d be more work than it’s probably worth. 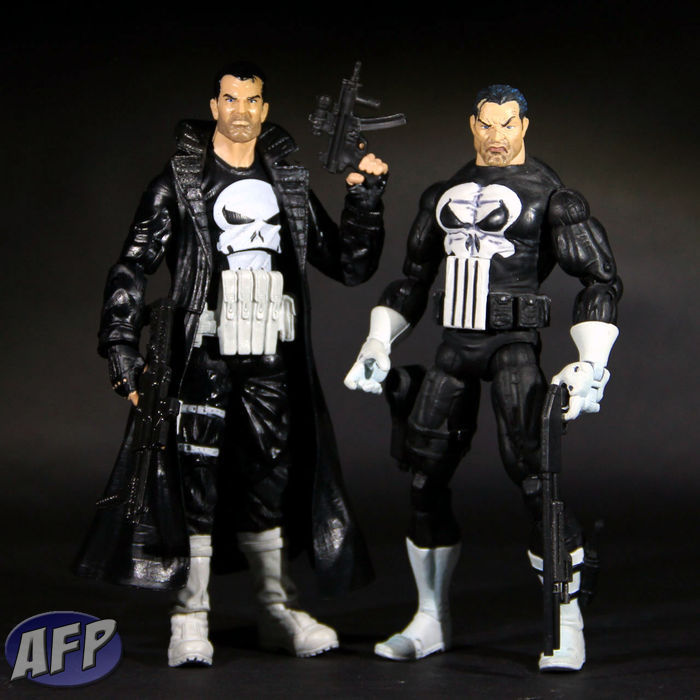 I wanted to give props to Josh Izzo, who made my favorite Punisher of all – it’s a combo of the ML4 Punisher and Face-Off Punisher.

Now if only I could send this army of Punishers to bring me back a Blade!