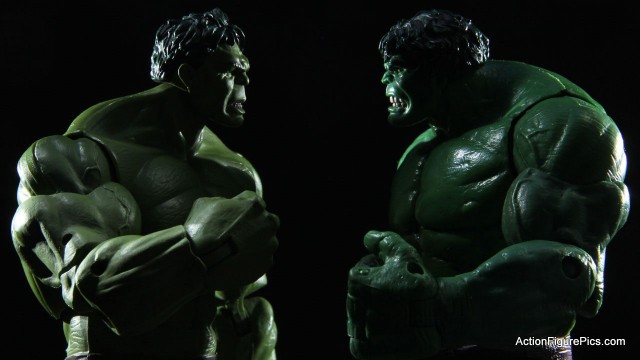 Here’s a quick pic I took of the two best Hulks I have in my collection – the Wal-Mart exclusive Avengers Hulk and the Marvel Legends Face-Off Hulk. I wanted to frame their silhouettes with light, so I positioned my two LED book lights off to the back and sides of them, so that each light was lighting the back of one figure and the front of the other. I also wanted a little color on both figures instead of completely dark silhouettes, so I used my cheap DIY reflector to bounce just a little light onto them from in front and above them.

I think the Wal-Mart Hulk has got the most effective articulation of any of the Hulks I’ve gotten so far, but I still love the sculpt and texture of the Face-Off Hulk, and I don’t think there will ever be a Hulk that tops the Face-Off Hulk’s head sculpt. Which of these two is your favorite? And if there’s another Hulk that tops your list, who is it?