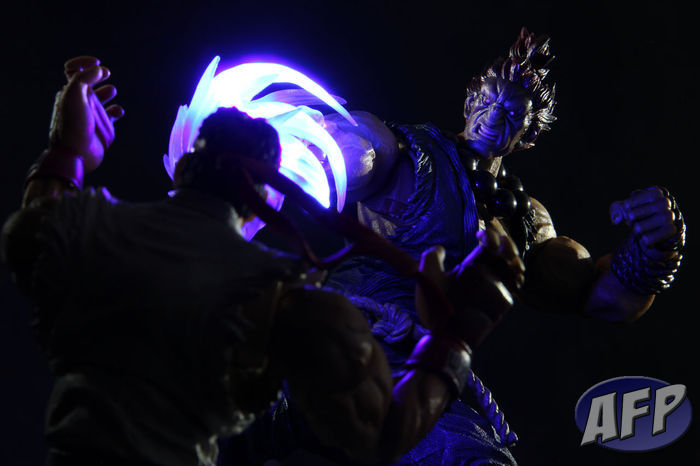 I promise – this is the last shot of Akuma and Ryu! I mentioned yesterday that I wanted Ryu’s head framed by the fireball, so I made that minor adjustment plus repositioned his left hand so the palm would catch some of the reflection off of the fireball too. And while I liked how in the second shot it looked like Akuma was appearing out of the darkness, I wanted to see what it would be like with some lighting on his sides, so you can make out his entire silhouette. For this I used the LED book lights, as the flexible necks let me position the lights exactly where I wanted them.

I noticed too that the straps from Ryu’s headband had fallen out in the previous pics, so this gave me an opportunity to add it back in.  And finally, tilting the camera allowed me to fill a rectangular image instead of having some unnecessary blank spots in a square. The added benefit – drama! At this point, I don’t think there’s anything other changes to make (hence my promise) – but if you have suggestions, let me know.

Although this was not intended, you’ve have now sort of been through my process of composing shots – snap pics, see how they look, and make incremental adjustments… and repeat. But instead of this being in one sitting, because of time limits the past few nights, it’s gone over a few days instead. If you want to see the progression, here’s the first shot of Akuma vs. Ryu and here’s take two of Akuma vs. Ryu. Thanks for looking!