Mark Nagata is a Renaissance man. He just might have the largest Ultraman collection in the world. As a designer and artist, he’s worked for the likes of DC Comics, LucasArts, and Hasbro. For several years, he published Super 7, a magazine focused on Japanese vinyl toys, before going on to start the Max Toy Company, designing and manufacturing vinyl art toys. On top of all this, he’s a tremendously nice guy!

Jedd-the-Jedi had a chance to sit down with Mark at STGCC. In the first part of their conversation, they spanned toy collecting, the differences between working for the big guys vs. running your own show, and if it’s alright to play with your art toys. It’s really a fantastic interview. Read on!

Jedd: Hi Mark, great to be talking to a fellow lover of toys. First off, what got you into collecting toys? You wrote on your site “I think it’s safe to say that most of us collect because of our childhoods,” so do you have any childhood memories of a particular toy or action figure that you want to share?

Mark Nagata: Oh boy, for sure. Well I think the first impression I had for Japanese toys is when I was about 9 years old, and I had an aunt who was living in Japan, and for Christmas she sent a very big box to me, and inside were about 20 different Japanese toys. So Henshen cyborgs, Bullmark figures, kaiju toys… but at the time, I didn’t know that’s what they were called. To sort of back up a little, I’m third generation Japanese American, so my parents were born in America and my grandparents came from Japan to America, but me being third generation, actually I don’t understand Japanese and I don’t speak Japanese, so when I got this box of toys, I couldn’t read anything except for the company name Bullmark, ‘cause it was printed in English. I didn’t know the names of the characters, I didn’t know that they had TV shows; I just thought they were toys.

So, from that point, it was really… I fell in love with the visual part of the toys. The way it looked, the packaging, because all the packaging had like very dynamic artwork and colours, very crazy colours, and all the kaiju for me… were just… I couldn’t even put into words what it did to my imagination. Because at that point, my toys in America were GI JOE 12 inch, Major Matt Mason, so very… 60s, 70s types of toys, but um very plain, based on like a real astronaut, or an army man. No imagination, right?

So when I opened that box, and I saw these crazy colours, and these kaiju and these spacemen, I was like… you know, what is this? I haven’t seen this before. So when I look back all these years, that’s the point that started me on this journey to this day, which is being able to make actual kaiju toys in Japan.

Do you feel that there’s a strict dichotomy between Western and Asian popular culture, and to a certain extent the toys? Because many Americans and Europeans have been embracing manga and anime over the last two-three decades, and some western artists have been influenced by it. As an illustrator, toy collector, and toy designer, what do you feel is different or distinct between Asian and Western toys and comics, to put them under those umbrellas?

Wow, that’s a very hard question! I guess my simple answer is, ah, for sure Asian culture has a much longer history than America, than Western, and it’s much more diverse in terms of its mythology. So, Western culture for the most part is based on Christianity, but not ‘gods’ and ‘demons’ and… I mean, they have the devil but, you know, it’s very much rooted in human types of characters, whereas Asian cultures at least as far as I understand, you could have a tree demon, you could have a water creature, it’s very much based on nature. Wind, air, fire… so I think that’s also a reflection on kaiju toys, is they’re much more free to create creatures that are not confined by human structure, so it’s not just Frankenstein (‘s monster), it can be an arm that has flame, a body that has ice and you know a leg that’s metal and it all makes sense, it’s no problem. Whereas if you try to that in America, (laughs), I think it really throws people off, right? They don’t quite get it; it’s like “I don’t understand, why is this arm like that.” But as you were saying, the influence of manga and anime, now, the younger generation, they’re more acceptant of this type of toy.

How different is it working for huge toy companies such as Hasbro and Mattel, compared to working for yourself at Max Toys? What did you glean from your experiences at the two big toy giants?

Well, when I did work for Hasbro and Mattel, I was a freelance illustrator; so basically, they would contact me to do a specific job. So if it’s packaging, box art, or backing cards for action figures, they would tell me exactly what to do. Exactly what pose, it needs to be this colour, the arm has to go two inches this way… so there is really not much freedom for myself to do much with the job – basically, it’s a job. But at the time, I was not designing toys, so it was strictly just artwork that I was doing for them. You know, they’re big companies, so the bottom line for them is they need to make money, and I understand that, you know. That’s just the way it is with big companies. But in terms of my company now, I have much more freedom to create whatever image I want… you know, paint the artwork the way I want… it’s perfect, it’s perfect.

It seems that toy companies, like the two I mentioned, are recognising the pull and power of adult collectors more and more. So, should there be a big distinction between kids’ market toys and “adult collector” toys? There are some instances where they cross over, but now there are less collector-aimed toys with action features, where there once were. It seems to be that some kids actually prefer highly-articulated figures, rather than those with five points of articulation and giant guns stuck to their arms.

Sure, sure. Um, I think, maybe about six or seven years ago, Hasbro and Mattel and a lot of the toy companies, they started recognising art toys, or urban toys, as something coming up, something that might be very popular. Designer toys, all under the same category. But I think the flaw in their execution was one of the appeals of these types of toys is you can actually meet the maker, or you know the artist. So if it’s The Beast Brothers and so on, it’s not a company, it’s two guys, right? And you can actually go and meet them and they’re the creators. Whereas Hasbro and Mattel, no matter what, they’re big companies, so you’re kind of detached from becoming… having a personal involvement with them. So, I know they try to move some of their toys in that direction, but um I think really they will not be that successful, because collectors will realise it’s not that honest. It’s the nature of the companies, and the amount they have to make – they have to make a hundred thousand figures, whereas a lot of us are making them in a couple of hundred pieces or less, very limited.

Can toys be art, and is it then alright to play with art? 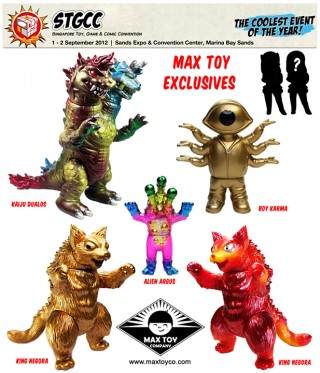 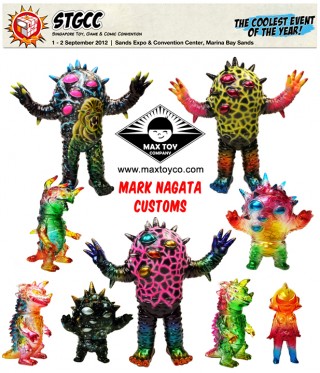 As far as I’m concerned, if you buy one of my toys, you can do whatever you want with it! (Laughs). But I think toys can be art, and you can still interact with it – it’s not a problem.

What is your defense when people say collecting toys is “childish?” – that if you collect toys, then that automatically makes a silly, basement-dwelling man-child?

(Laughs) Wow! Those are very… very strong words! As far I’m concerned, if you’re a very positive person and you’re not harming anybody, then really, it should be nobody’s business what you want to do. So, I try to be positive about what I produce, but I don’t want to tell people that, you know, “don’t open it,” you know, “keep it in the bag” or “keep it in a case”… it’s really up to the person to just enjoy it how they want to enjoy it.

Collecting toys seems to be about the passion. So how do you reconcile the “passion” part of the toys and comics business with the “money-making” part? Because one doesn’t want to be a starving artist but one doesn’t want to be a sell-out either. Huge toy companies get a lot of flak for occasionally poor quality control, reusing parts and molds, endless repaints and generally not giving fans not what they want – so it does less of a problem in smaller, more collector-oriented toy companies such as your own?

It’s… the one thing that is similar with the bigger companies is that I do have to produce multiple runs from the same mould. And that’s an economic decision, because I have to invest a certain amount of money to have the toy made, and it take me at least three runs to just break even. So by the time I get to #4 or #5 or #6, then I can start making a little bit of a profit (chuckles)… it’s really not that much. I mean, I think many collectors would be surprised, um… I tell people “don’t go into the toy business if you want to be rich”. (Laughs) It’s tough, it’s tough. And that’s why the bigger companies have to make a hundred thousand or a million of something, because that’s the only way they can make money.

Is it safe to assume that your interests in toys and in drawing went hand in hand?

Oh yes, for sure. And again, that goes back to when I opened that box of toys from Japan, because the toy was sitting right on top of a piece of artwork, you know, the packaging. So as soon as I removed the toy, didn’t know which was better right, the artwork or the toy!

Lots of kids draw pictures of their action figures, and some artists use action figures as reference material. Are you one of those artists?

Sometimes I do, yes. It’s cheaper than getting your friends to pose. (Laughs)