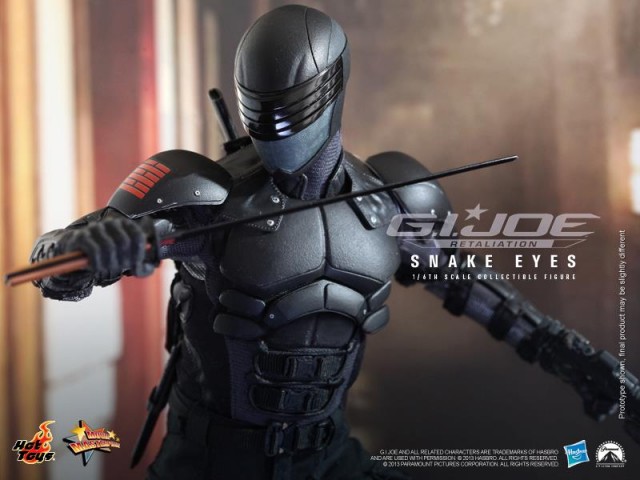 I’m in trouble – Hot Toys just announced a 12-inch Snake Eyes figure. Sure, it’s a movie figure for Retaliation, but it’s mother-effin Snake Eyes. The first movie left me only lukewarm – it didn’t quite immortalize the Joes, and the Snake Eyes costume, with its molded lips on the mask, left a lot to be desired. But the costume redesign, and how it looks on this figure, has raised the bar.

I still don’t have high expectations for the G.I. JOE Retaliation sequel, but I must have this Snake Eyes figure for my toy shelf.

In view of the popularity of the G.I. Joe series and the launch of the G.I. Joe Retaliation movie in early 2013, Hot Toys is proud to present the Snake Eyes Collectible Figure from the G.I. Joe Retaliation movie as the first collaboration with Hasbro. The movie-accurate collectible is specially crafted based on the image of Snake Eyes in his black “military ninja” bodysuit in the movie, highlighting the character’s image, highly detailed costume and weapons.