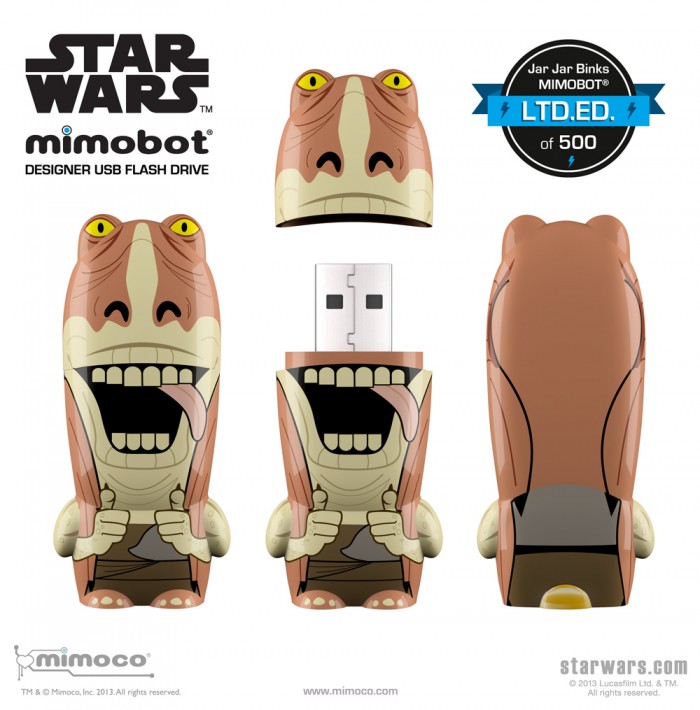 The joke now is that some hardcore Star Wars collectors may find themselves in a quandary that would challenge even Yoda: pick up what is sure to be an extremely limited exclusive for their collections, or skip the most hated character in the Star Wars universe. To help you say no, if you get Jar Jar and install the accompanying software, you’ll get a dose of Jar Jar Binks sound bites every time you plug him into your computer. Yousa people gonna die.

For Real This Time!

(BOSTON, MA—April, 1 2013) — Mimoco, creator of the MIMOBOT® line of designer USB flash drives, in collaboration with Lucasfilm, and to celebrate April Fool’s Day, announces the actual release of Jar Jar Binks MIMOBOT USB flash drives. After an upset about the prank release of the character last year, Mimoco has nodded to fans of Jar Jar by making the MIMOBOT an extremely limited reality; only 500 hand-numbered units are now available with up to 128GB of data storage.

The drive comes preloaded with exclusive Jar Jar Binks Mimory® content including the MimoDesk® personalization suite, which is comprised of Binks-themed wallpapers, icons and avatars. It also comes equipped with MimoByte® sound software, powered with an offering of iconic sounds and character dialogue that play each time a Jar Jar Binks MIMOBOT is inserted or ejected from one’s computer.

“Listen, Jar Jar Binks was a fool. But he was an extremely self-assured fool, and there’s something to be said for that,” explains Jessica Smiley, Director of Social Media at Mimoco. “When mimocult members tried to buy our BinksBOT last year, we said ‘ Gotcha!’ but knew we had to make it right this time around.”

Jar Jar Binks MIMOBOT –  Yes, Mimoco turned the character with the worst memory in the Star Wars universe into a memory storage device! It’s in Jar Jar’s nature to blaze trails, just as he was the first of his kind to sit and serve on the Galactic senate, Binks, a member of the Gungan race – those amphibious humanoid-frog creatures, now joins esteemed Star Wars™ characters like Darth Vader, R2-D2, C-3PO, and a Stormtrooper in MIMOBOT form and function. Jar Jar finally takes his place in the MIMOBOT collection as an ultra limited edition one year after Mimoco announced him as an April Fool’s joke. 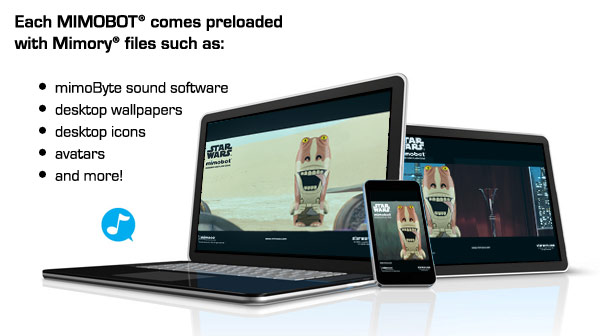 The Jar Jar Binks MIMOBOT® is now available exclusively at Mimoco’s online store at www.mimoco.com and in select stores worldwide.