Entertainment Earth and Hasbro have revealed the first figure from Star Wars Black Series wave 2, and it’s none other than Greedo, Han Solo’s unwitting victim in the Mos Eisley Cantina on Tatooine. They’re planning four successive reveals each week that highlight the design and development of the Greedo figure. This first week gives us a glimpse at the figure’s blaster, holster, and hands – which I’m guessing have bendy fingers. While you’re there, you can pre-order Star Wars Black Series wave one.

But you’re not thinking about that, are you? You’ve got the Cantina Band music playing in your head now and you can’t get it out. Instead, try this – start humming the William Tell Overture (that’s the Lone Ranger theme song) and tell me it doesn’t morph into the Cantina Band song. Crazy, huh? Not as crazy if wave 2 doesn’t also include Han Solo. 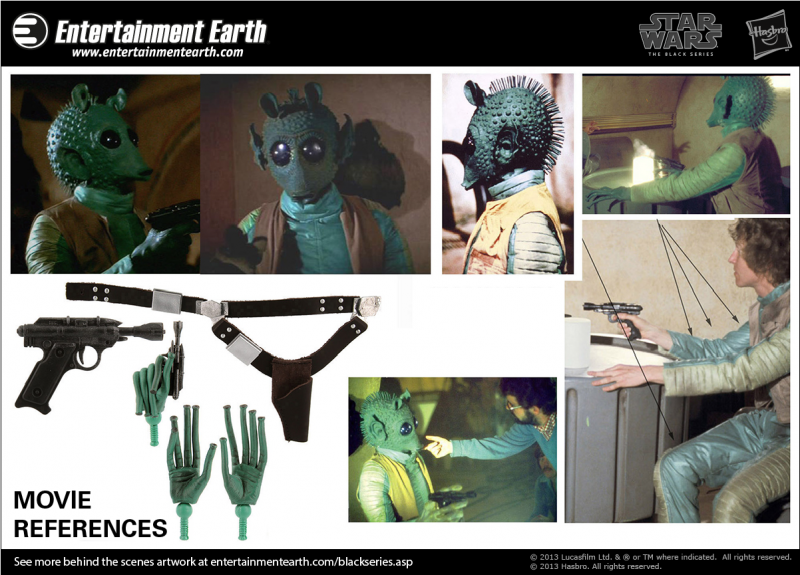 In collaboration with Hasbro, Entertainment Earth is proud to introduce a never-before-seen figure in the second wave of the BLACK SERIES 6-inch scale action figure line! During the next few weeks, we will release images that give fans an inside look at the development of this great new character — concept to final product. Visit EntertainmentEarth.com weekly to see what we reveal in this exciting line that features incredible accuracy and articulation.