Are you excited for a new installment of the Weaponeers of Monkaa? The first chapter is up, and we’ll see new chapters every day this week.

Then, a new drop a week from Wednesday, including SDCC exclusives. Cool stuff! 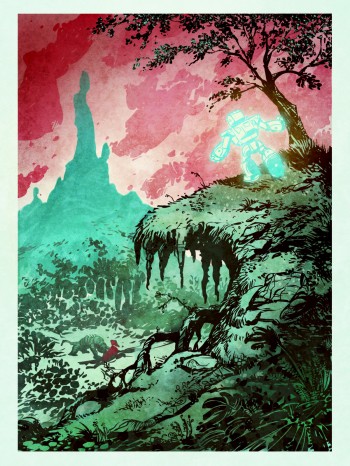 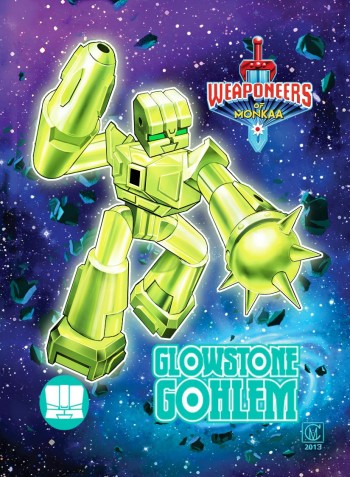 The landscape was silent. It was just before dawn, and very still in this brief moment between night and day. Suddenly there was a ripple in the air, a deafening crack, and then a blinding explosion of light and fury. When the dust settled there was a crater, jagged on the edges like the broken shell of an egg. At the center of the crater a hunched figure stirred and slowly rose. It was a Gohlem of Monkaa. However, this Gohlem was different. Tall and perfectly formed, he pulsed with the glow of raw power. This newly awakened Gohlem surveyed the land and skies around him, quickly discovering he was alone and that he had no idea where he was.

Nor did he have any idea who he was.

Here are the details of our upcoming release of the newest WOM figure and colorways!

Beginning this coming Monday 8/26 – Friday 8/30 join us each day for an exciting new chapter in the Chronicle of Monkaa! This tale, Power of the Lifespring, takes place right after the dark turns of Bloodlust.

The drop will occur on Wednesday 9/4 at 12pm pacific time.
Figures and accessory packs as featured in the upcoming “Power of the Lifespring” Storyline will be available at the Spy Monkey Creations Store!

The new products will include:

We will also have limited quantities of our SDCC figures available for this drop.

This Deluxe figure will include mock card back, all alternate Weaponeers of Monkaa heads, weapons, a hand made cape, and Close Combat Armory set in a matching color.

That’s not all! There will be a special Fully Armed Upgrade option available as well! This Super Deluxe option will include all that comes with the Deluxe figure, PLUS a full set of the Original Weaponeers of Monkaa Armory in solid white to match the paint ops on this figure. The Super Deluxe option (a $25 value) is a great value at $20!

The W.O.M.O.M.F.G. Gohlem is a collaboration with our awesome friends, October Toys. Paying much respect to their popular fan participation and crowd funded OMFG mini-figure line. The W.O.M.O.M.F.G. Gohlem is molded in the same flesh toned plastic as those Outlandish Mini Figure Guys. It also includes a mock card back, all alternate Weaponeers of Monkaa heads, weapons, and matching Close Combat Armory set. There is even a special OMFG faction symbol just for this figure.

via Here are the details of our upcoming release of… – Spy Monkey Creations Inc..