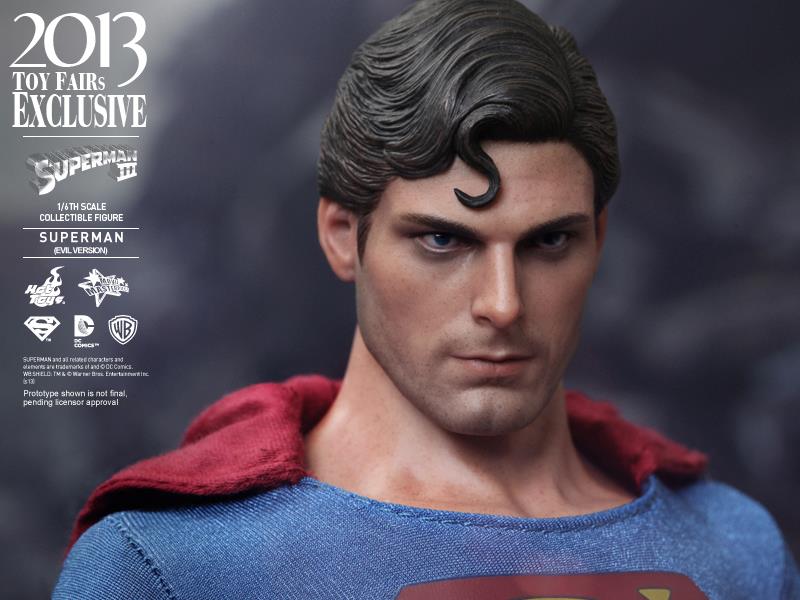 When Sideshow put the Star-Spangled Captain America and G.I. JOE’s Joe Colton up for pre-sale last week, I wondered what happened to the third of the Hot Toys “Toy Fairs” exclusives. I guess it wasn’t too far behind, because the Hot Toys Evil Superman from Superman III is now up for pre-order. Since Sideshow is the Hot Toys distributor in the US, I think they’ll be the only ones to carry this here.

It’s been so long since I’ve seen any of the Christopher Reeve Superman movies that I have pretty much no recollection of the third movie with Richard Pryor – I’m thinking that’s probably a good thing given its low ratings. But it’s probably time to watch them again.

Superman, a kind-hearted hero with an unwavering sense of justice, morality, and righteousness has descended into darkness, due to exposure to synthetic kryptonite in the film Superman III.

Sideshow Collectibles is proud to introduce the Superman (Evil Version) Sixth Scale Figure from Superman III as one of Hot Toys’ 2013 Toy Fair Exclusives. This collectible is specially crafted based on the image of Christopher Reeve, highlighting the detailed head sculpt, movie-accurate costume, and specially designed figure stage.

Paying tribute to Christopher Reeve, Hot Toys is pleased to support the Christopher & Dana Reeve Foundation and their mission to advance research into spinal cord injury and improve quality of life for people living with paralysis.