See more of DC Collectibles’ New 52 Crime Syndicate in their Caption This! entry for the month.

I’ve seen some people comparing these figures to DC Universe Classics due to the increased level of articulation, but to me, it’s more like Marvel Legends – these figures seem to have neck hinges (or at least functioning ball-jointed necks), double-jointed knees, and wrist hinges / swivels. But to me the newer-styled hips are what really cements the similarity to ML. I would really like to see more DC Collectibles featuring this articulation setup.

Caption This!: Drafting for Destruction

It’s time for another edition of Caption This!, the monthly game from DC Collectibles where we give you the picture, and you give us the (hopefully far less than a thousand) words.

It may be Villains Month, but it’s also fall. Which means that like many of you, we’re busy building our fantasy leagues. And let’s just say that draft time around here gives new meaning to the term cutthroat, especially when our new Crime Syndicate action figures get involved… 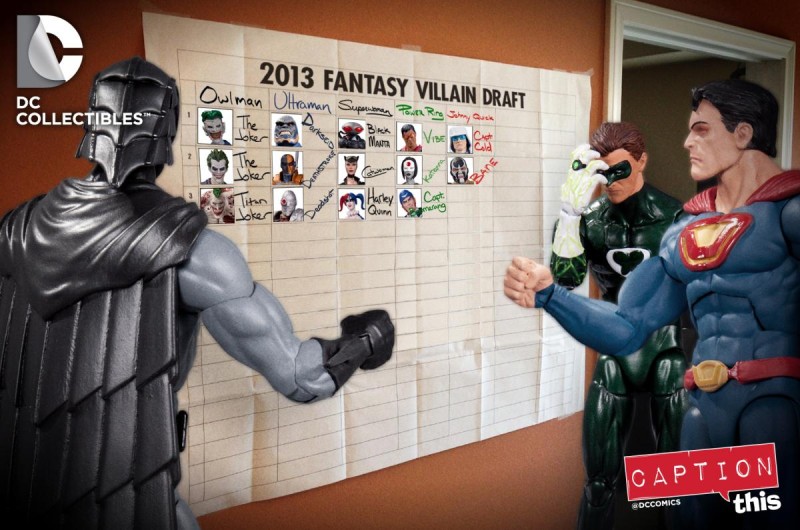 Click on the photo for a closer look. Let’s see, we have Black Manta, Bane, Darkseid, always an excellent choice–

Wait a minute! No one’s picked Doomsday yet? Yeesh! Is it too late for us to get in on this draft? Well, it’s certainly not too late for you to come up with a caption. Just post it below in the comments. Then “like” your favorite captions so they rise to the top of the list!

via Caption This!: Drafting for Destruction | DC Comics.