In just a couple of hours Spy Monkey Creations will release their latest Weaponeers of Monkaa drop – the Lifespring figures and accessory sets. They’re all molded in glow in the dark and silver chrome materials for a very cool look. In addition, they’ll also have a small number of their San Diego Comic-Con exclusive figures – the Lord of War deluxe set and the WOMOMFG Gohlem, their collaboration with October Toys and their OMFG line. It all goes up for sale at Noon PST today, at the Spy Monkey Creations Store.

Also, make sure to catch the completed Lifespring story, with art by Nate Baertsch complementing the Spy Monkey story.

Here are the full details with photos of our upcoming release of the newest WOM figures and colorways!

The drop will occur on Wednesday 9/4 at 12pm pacific time.

This exciting release includes figures and accessory packs as featured in the recent “Power of the Lifespring” Storyline will be available at the Spy Monkey Creations Store!

The new products will include:

This standard Weaponeer figure includes a full set of bonus heads and sword and sickle accessories. Each figure includes 31 Glyos System Compatible GLOW in the DARK PVC parts and a matching trading card. 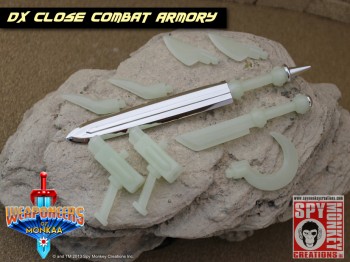 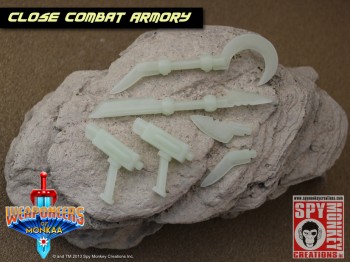 We will also have limited quantities of our SDCC figures available for this drop.

This Deluxe figure will include mock card back, all alternate Weaponeers of Monkaa heads, weapons, a hand made cape, and Close Combat Armory set in a matching color.

That’s not all! There will be a special Fully Armed Upgrade option available as well! This Super Deluxe option will include all that comes with the Deluxe figure, PLUS a full set of the Original Weaponeers of Monkaa Armory in solid white to match the paint ops on this figure.
The Super Deluxe option (a $25 value) is a great value at $20!

The W.O.M.O.M.F.G. Gohlem is a collaboration with our awesome friends, October Toys. Paying much respect to their popular fan participation and crowd funded OMFG mini-figure line. The W.O.M.O.M.F.G. Gohlem is molded in the same flesh toned plastic as those Outlandish Mini Figure Guys. It also includes a mock card back, all alternate Weaponeers of Monkaa heads, weapons, and matching Close Combat Armory set. There is even a special OMFG faction symbol just for this figure.

See you all WEDNESDAY!!!