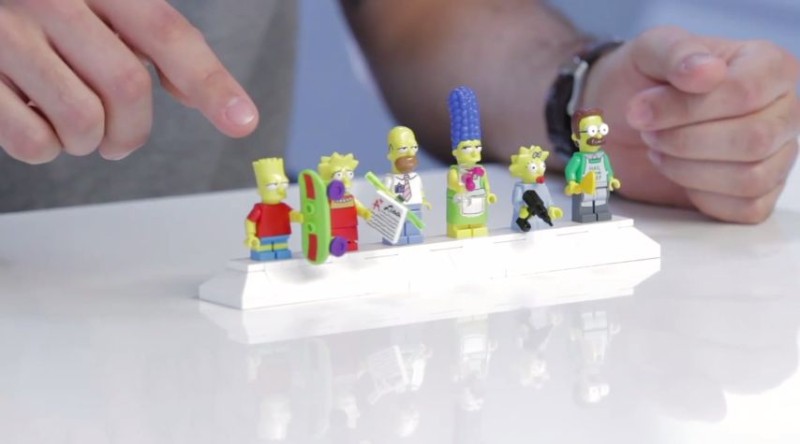 Back when LEGO first acquired the Star Wars license, I worried that they were killing their business by delving into expensive licensed properties. Now, years later, their licensing program continues to flourish with the most dominant licenses – and it’s about to add another big brand to the fold.

Coming in February, LEGO launches the Simpsons brand with the Simpsons House, comprised of over 2.5K bricks, including 6 mini-figures – Homer, Marge, Bart, Lisa, Maggie, and Flanders – wow! At about $200, the set is not cheap, but considering people have been cobbling together Simpsons LEGOs for years, I think it could be another big win for LEGO.

D’oh! The Simpsons™ House has been turned into LEGO® bricks!

Build The Simpsons™ House with detachable roof, modular design, car with dent, the famous family couch, 6 minifigures and so much more.

Recreate hilarious scenes from the classic animated TV series with The Simpsons™ House. Taken right out of Springfield, this amazing model is crammed with tons of LEGO® brick detail. Lift off the roof and open up the house to discover Homer and Marge’s big family bedroom including bed and Maggie’s crib, Bart’s room with his skateboard and Krusty the Clown poster, Lisa’s room with her favorite books, jazz poster and more, and bathroom with shower, toilet, sink and mirror. Lift off the top floor to reveal the fully-fitted kitchen with dining table, chairs, yellow and light-blue tiled floor and lots of pots, pans and other accessories. Then it’s into the living room with couch and TV playing Itchy and Scratchy, purple piano and more. Next to the house is the detachable garage, complete with workbench, tool rack, vacuum cleaner, broom, toolbox, tools and the family car, complete with dent because only in a LEGO world are dents a plus!, opening trunk and ‘radioactive’ bar from the nuclear power plant. Step outside onto the terrace and you’ll find loads of cool items, including a grill, wheelbarrow and air conditioning unit with ‘Property of Ned Flanders’ decoration, sausages, 2 garden loungers, flowerpots, a shovel, 2 fruit cocktail glasses, Lisa’s camera, Bart’s skateboard ramp with ‘El Barto’ graffiti and an antenna on the roof. The Simpsons™ House is the perfect collector’s item for fans of all ages. Includes 6 minifigures: Homer, Marge, Bart, Lisa, Maggie and Ned Flanders.

Available for sale directly through LEGO® beginning February 2014 via shop.LEGO.com and LEGO® Stores