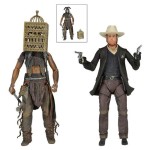 I am amazed that Entertainment Earth continues to have daily deals. Today’s is for a set of two figures from NECA’s Lone Ranger series for %25.20 (that’s 30%off) – and of course those two figures are of Tonto and the Lone Ranger. The second wave features a bird cage accessory for Tonto, and an unmasked head sculpt for the Lone Ranger.

What’s more amazing is that the pairing of Gore Verbinki and Johnny Depp produced such a dud. I suppose their collaboration on Pirates of the Caribbean declined throughout the series, but they had returned to form with Rango. But I guess when you make a Tonto movie and call it the Lone Ranger, it’s bound to disappoint a few people.