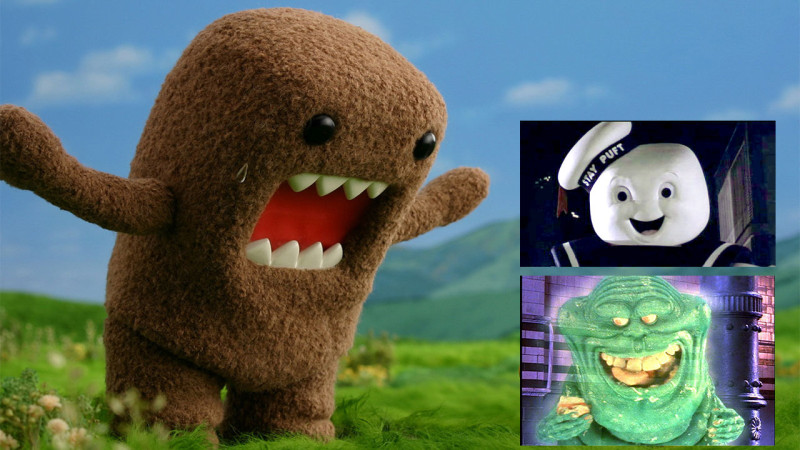 We may never see Ghostbusters 3, but that doesn’t stop the franchise from having an extended after-life via licensing. The latest? A mash-up of the Ghostbuster mascots, Slimer and the Stay Puft Marshmallow Man, with Japan’s Domo.

Somehow Mr. Stay Puft with Domo’s teeth is even more terrifyingly cute than the original! 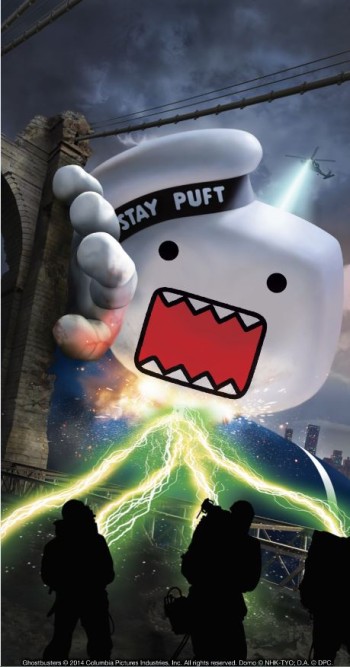 NEW YORK – The Internet and social media meme that has become a mascot for the millennial generation – Domo – is crossing streams with one of the most iconic film franchises of the past 30 years – Ghostbusters – in a new consumer products line that will put a smile on the face of pop-culture fans everywhere.  This supernatural entertainment mash-up takes a fresh approach to the Ghostbusters franchise blending both classic and new with cross generational appeal casting Domo in a line of collectibles and plush for a limited time only. The line, made possible through an agreement with Sony Pictures Consumer Products as brokered by Big Tent Entertainment, is slated to hit shelves in fall 2014.

The line will concentrate on those eccentric characters from the franchise, namely Slimer and the Stay Puft Marshmallow Man, best suited to stand alongside the enigmatic furry brown Domo, and will cast them in instantly recognizable scenes from the film.

“Ghostbusters is one of the most influential and instantly recognizable pop-culture icons of all-time,” said Rich Collins, President and CEO, Big Tent Entertainment. “This mash-up bridges the generation gap between pop-culture fandom and blends two franchises that seem to share a common sensibility.”

In Ghostbusters, University parapsychologists Dr. Peter Venkman (Murray), Dr. Raymond Stanz (Aykroyd) and Dr. Egon Spengler (Ramis) lose a research grant when their experiment methodology is proven to be bogus. The team decides to go into business for themselves and open ‘Ghostbusters,’ a ghost removal service. After struggling to get on their feet, they are summoned to investigate the strange happenings in Dana Barrett’s (Weaver) Central Park West apartment. What they discover is that all Manhattan is being besieged by ghosts and other worldly demons through a portal in her building.

Domo’s unique look and personality as the mascot for Japanese public broadcaster NHK quickly catapulted the character into one of the Internet’s biggest sensations. As the reigning poster child for personalized, user-generated content, Domo has found a home as a pop culture icon with over 6 million Facebook fans and hundreds of thousands of fan-made images, websites and videos posted to websites such as YouTube, Instagram, Pinterest and Flickr, among others.  Now more than a decade later, the lovable fuzzy brown character’s cult status continues to grow with product flying off retail shelves.