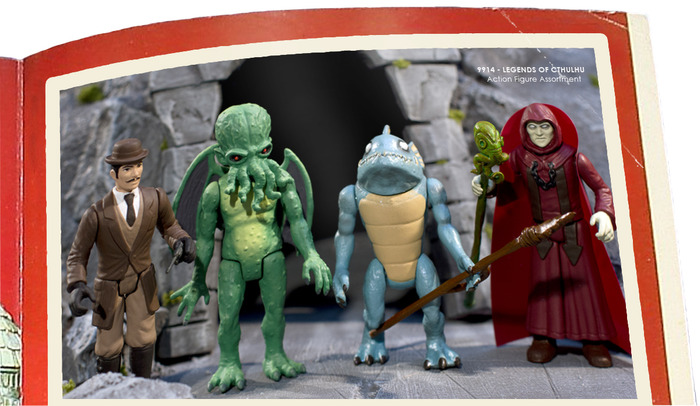 It seems like everyone is trying to make “retro” style figures these days, particularly on Kickstarter, but this one seems like something special. Warpo Toys has gone all out and hired artists and sculptors from the 70s-80s toy industry, and gone as far as to make a retro style commercial, catalog and packaging/artwork.

The Legends of Cthulhu Retro Action Figure Toy Line Kickstarter project launched yesterday and has a $60K funding target to reach by June 9. They’re off to a good start, currently over halfway there in just a day. Give it a look!

Unfortunately this never happened… but we wished it did, so we’re making it happen now.

Growing up in the 70’s and 80’s we were immersed in role playing games like Dungeons & Dragons and Call of Cthulhu. We always felt that Lovecraft’s worlds were deserving of their own action figure line and what better time period than the late 70’s / early 80’s when his work first began its modern-day resurgence and the golden age for action figure collectibles was in its prime.

The result is our interpretation of what a major toy company in that era would have done with these characters and how a creative team of the period would have translated H.P. Lovecraft’s stories into a mass-market children’s toy property.

Our initial line-up will include 4 figures based on archetypes from the HP Lovecraft universe:

The Cultist: A member of the Cult of Cthulhu, an organization of humans working to hasten Cthulhu’s return to power on earth.

The Deep One: An immortal undersea creature that serves only the all powerful Cthulhu.
Figure Specs: 3.75″ tall, swivel head, jointed arms and legs
Accessories: Spear

The Professor: Adventurer, investigator, and the unfortunate hero whose journey brings him to the edge of madness.

Figures will come packaged in a Kickstarter exclusive blister card that Warpo has spent much time and consideration to ensure a nostalgic experience. We knew the package artwork would be crucial to making this a success so we enlisted Ken Kelly to hand paint the front and back of the card.

You can find out more info at:

One thought on “Legends of Cthulhu Retro Figures Launched on Kickstarter”