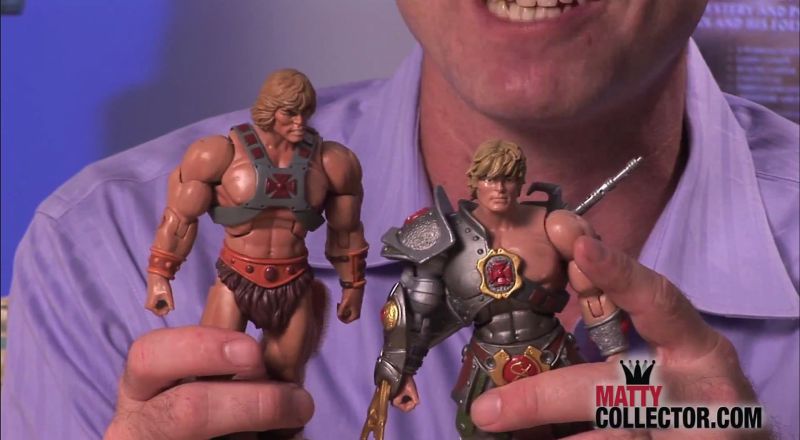 Mattel may not be making its previously scheduled stop at New York Comic Con this year, but to make up for it, Toy Guru posted a rather substantial video update for the Masters of the Universe Classics line. Clocking in at nearly 12 minutes, it’s as much content as you’d likely have gotten if you were sitting in the Mattypalooza panel just for the MOTUC portion. And then there’s the added bonus of Toy Guru actually demonstrating each figure’s articulation and accessories, complete with the occasional figure knockdowns.

One thing you will miss without an actual panel this time around is the Q&A portion – for example, what finally caused the policy change that allowed not only 200X heads but a complete 200X two-pack into the line? By the power of Grayskull!

The end of the Classics line begins in January 2015! Here’s a close-up look at some of the figures (and accessories) we’ll release: Lizard Man, Ninja Warrior, fans’ choice Huntara, Oo-Larr, and “versus” two-pack 200X Snake Armor He-Man & Battle Armor King Hssss. Want more sneak peeks? Subscribe to this YouTube channel! Visit MattyCollector.com to check out exclusive behind-the-designs interviews and photos, ask Toy Guru your burning questions in our Fan Forums, and register to get email reminders for our sales/events. You can also find us on Facebook, Twitter, and Google+ for pics, updates, reminders, and more.

via Video: 2015 Masters of the Universe Classics Update – YouTube.