Long-time reader Matt Cauthen has shared his experience with us as a first-time customizer, and we were really impressed with the results!

Reminder: the entry deadline for CustomCon 38 is coming up on December 5.

I’ve been a fan of ActionFigurePics.com for a few years. I’ve mostly kept up with news and pics of Marvel Universe 3.75 figures as they were issued. What inspired me to do my own custom was a post on editing the Magneto figure that came in a 2 pack. I have that figure as well and plan on making my version soon. As you already know, too many of the Marvel Universe figs have first issues that have stunted or deformed bodies. Wolverine was my choice for my first custom because I still believe they have yet to make a completely satisfying figure of him. They are either too small or hunch-backed with a stunted torso.

To upgrade Wolverine, I started with 2 figures. I used the torso and arms from Piledriver (found in a 2 pack with Hawkeye) and X-Force Wolverine’s legs, claws, and head sculpt (later I switched head sculpt out with the Target exclusive 2 pack with Ninja).

The ball joint for the head on Piledriver wasn’t compatible with Wolverine’s head sculpt, so I had to do surgery by removing it and transplanting his ball joint to Piledriver’s body. I used model knives and a file to make the transfer spot level and clean. Super glue held it together nicely.

After a simple assembly I went to the priming stage. I used a nice primer I found at Michaels near the acrylic paints (don’t have the name). The next stage was painting. I mixed up some various model paints that you find at Michaels or Walmart (Testors I believe). The base brown is a color called Rust brown and the cheese yellow is simply a yellow with a little brown and orange mixed in.

After initial painting, I glued his claws back on. At this point he looked ok but I felt some thing was missing. “Ah, a belt!” I didn’t want to paint it on. I found a belt to use on the X-Force Warpath. I placed it on and painted it.

At this point he was fully painted and still had the X-Force head sculpt on. I finally got the other head sculpt in the mail and decided to use it on this custom instead of another as it fit the appearance of retro Wolverine. After that, I decided to add details to the cracks and add depth to his arms. Finally, did some finally touch ups and bam, custom brown and yellow Wolverine completed.

When I started this, it was simply to create or rather “fix” Wolverine to the standard I believe we as fans deserve to see represented. I’ve always been a fan of the 90’s X-men comics and love the outfit (Brown and Yellow) he wears, as it is my favorite Wolverine. As I was recreating him, thoughts ran through my mind of ideas for other customs. At that point, I was merely a collector. But I suddenly found myself digging through my unopened figures to find ones I could use or improve. I have also tried to improve my painting process. This Wolverine was all done by hand minus the primer spray. I bought a starter airbrush kit for future customs (bought mine at Michaels for $35) so I can put on an even base coat so there are less brush strokes visible (I also plan on buying a cheap air compressor to avoid buying more propel spray). I’ve also leaned a lot about primer, paint, and thinner in the process. I use a lot of thinner to clean my air brush and paint brushes and use it to thin out paint when needed (you need to clean your airbrush after every use and it is time consuming).

The process has been very therapeutic even though it’s time consuming. I now find myself deep into a hobby that is extended from my collector hobby as I search for parts to use such as custom head sculpts or hard to find figures. Plans unravel in my head as I piece together my next project. I chose to do this to entertain myself and meet my comic book desires and now I find myself trying to improve a new skill that I have obtained. Google has been my friend and patience gets the better result. You can learn from others recipes or come up with ones on your own.

Don’t rush it. Enjoy it. Get the final product right. And most of all, do it your way and make it your figure. We should get our heroes the way we’ve always imagined. 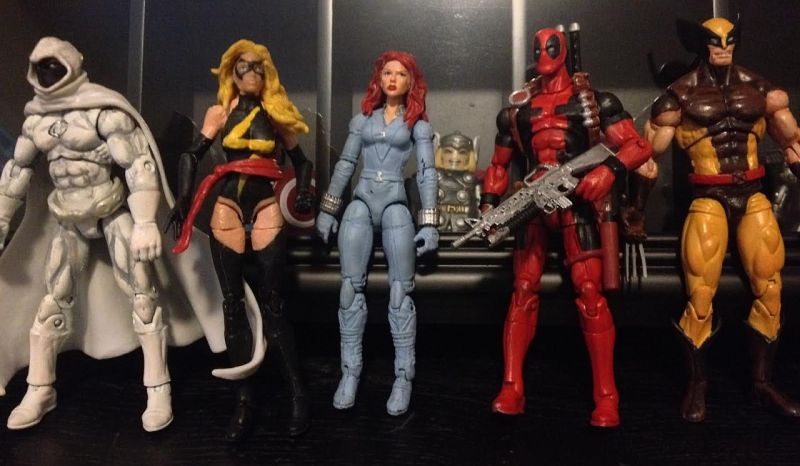