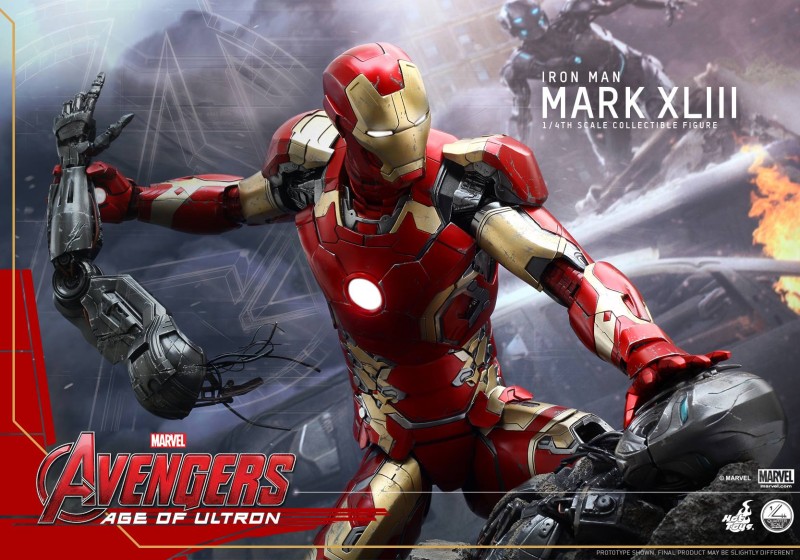 Have a big house and an even bigger toy budget? For those of you who think 12-inches of Iron Man isn’t enough, Hot Toys has just announced the first quarter scale Iron Man. The Iron Man Mark XLIII from Avengers: Age of Ultron stands at an impressive 20-inches tall and has all the bells and whistles you could expect – an interchangeable Tony Stark head and three pairs of hands; LED light-up eyes, ARC reactor, and repulsors; and an Ultron Sentry base with an arm and head that Iron Man can rip off of it.

You can pre-order the Marvel Iron Man Mark XLIII Quarter Scale Figure from Sideshow Collectibles for $544.99. That’s a bargain, considering their listing for the Hot Toys Hulkbuster Iron Man (one inch taller at 21-inches tall) at $824.99. Guess it’s time to tell my wife we need a second mortgage!

“Isn’t why we fight so we can end the fight and go home?”

The path of Marvel’s Avengers: Age of Ultron collectibles by Hot Toys continues as the exciting blockbuster’s release date is getting closer! Since the reveal of the prototype at toy exhibition late last year, fans have already been anxiously waiting for this collectible figure, today we are very thrilled to officially present the first 1/4th scale Iron Man collectible figure – the Mark XLIII from Avengers: Age of Ultron!

Iron Man fans shouldn’t miss the chance to add the first 1/4th scale and the most detailed Iron Man collectible figure yet to your prized collection!