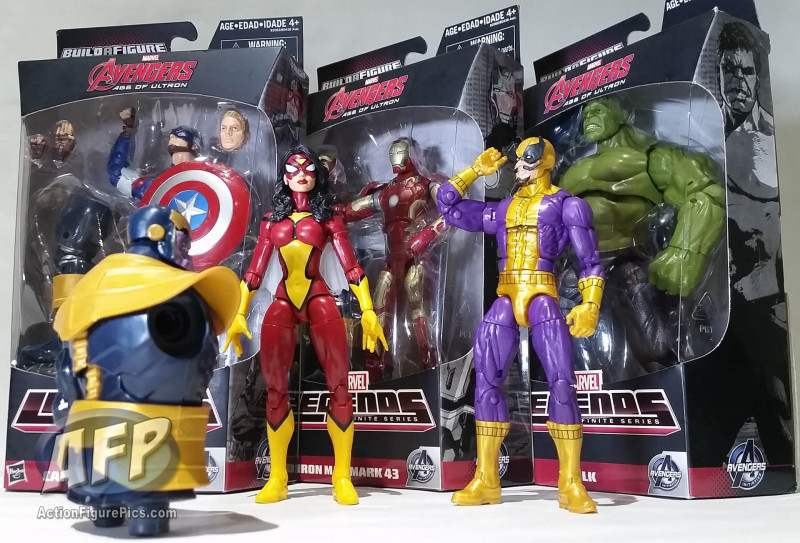 As you may have seen, while I was traveling, I was lucky enough to pick up the Marvel Legends Batroc and Spider-Woman (see their fly-by video) on the pegs at a Hong Kong Toys R Us. I had a pre-order for the Marvel Legends Thanos wave at Amazon (they’re all in stock at regular or sale prices, except for Spider-Woman), and now the rest of the wave, Iron Man, Hulk, and Captain America are here.

That means I can complete my Thanos Build-a-Figure, who was missing his right arm and both legs. I opted not to pick up Hellcat because I didn’t want to be tempted by the leftover BAF piece – like Spider-Woman, she comes with Thanos’ head and left arm. The completionist tendencies (which I am trying to break) will probably win out in the long run.

The packaging from Amazon came relatively unscathed (compared to that Spider-Woman’s and Batroc’s, which got crushed a bit in our suitcase). Having thought of it some more, while I like the uniform shape of the card, I do miss the artwork on the back of it. While it’s now on the side, it’s in grayscale – and the picture of the figure on the back is superfluous.

One thing I noticed, particularly with Iron Man and Cap, is that the action poses can bend the figures in unwanted ways if they’re inserted into the plastic trays poorly. Iron Man has a bad bend in his left elbow, with the joint twisted since it’s softer plastic. I imagine I’ll have to heat it up to see if I can straighten it out. Cap was shipped with his pointing hand behind his shield. When I removed it, it was bent sideways as if the Red Skull had broken his index finger.

Maybe it’s the bent left arm that’s bothering me, but Iron Man is my least favorite of the wave – I’m sure he’ll be back on top when the Hulkbuster wave ships. It could also be that his shoulder guard on his right side is warped and won’t sit correctly over the ball-jointed shoulder.  Maybe it’s just Iron Man overload – the movie costumes have slight variations from movie to movie, but not enough for me to go hog wild over getting them all.

He comes with an alternate head with the face plate lifted – nice touch. And the hands seem to be a mirror image of the Mark VI, with the fist on the left and the repulsor hand on the right. The hands don’t seem easily removable if you wanted to go two fists or two repulsor hands if you have the other figure, but I think a boil and pop would do it.

Hulk, on the other hand, is one of the highlights. He is massive, barely fitting in the package – I’m glad he’s a single carded figure, because he’s big enough to have been a BAF, even bigger than Thanos. I’m sure the Avengers Hulk figure from the first movie is jealous about the newer version’s stretchy pants, plus the AOU Hulk gets two fists. By now, I hope it’s sunk in with Hasbro that Hulk always deserves two fists.

My petty nitpick on Hulk has to do with his alignment. He comes with a mid-torso joint that allows some great posing, but you’ll notice that in many of the pictures it’s off-kilter. That wasn’t a conscious thing I did – when I try to get him to stand straight up, it appears that Hulk has a little bias to his right side. His right hip juts out to the right, and since he has no ab swivel, I found myself compensating with that torso joint if I wanted Hulk standing straight up. His neck seems a bit right-biased too. But other than that, I think he’s pretty damn nice. HULK SMASH!

The movie costumes for Cap have grown on me with each successive version of it. I really didn’t like the First Avenger costume, and it’s also my least favorite of the movie Caps so far. AOU Cap is almost entirely a reuse of the Winter Soldier Cap – with redeco of course. He comes with the same interchangeable hands – two fists, a flat right hand, and a pointing left hand. He also comes with the same unmasked head. I prefer it to the helmeted head, just like I do in the movies – that helmet just looks too goofy to me, especially on the big screen.

Hasbro did change the upper torso for the AOU costume details. They could have cheaped out and done the repaint on the Winter Soldier Cap upper torso, but they did the right thing. The thing I am missing with the movie Caps so far is the ability to put his shield on his back. I like how some of the comic book Caps from the Legends line have a peg hole for inserting the shields on their backs or how the original Cap from first wave of Marvel Legends from Toy Biz had the elastic straps.

I was already impressed with Thanos just based on the parts I had from Batroc and Spider-Woman, so it was cool to complete him. Like I suspected, he is somewhat dwarfed by the Marvel Select Thanos from Diamond Select Toys. But both fit in Legends for me.

His ringlet around his neck attaches in place with pegs into his trapezius muscles but comes up fairly easily. I’m thinking about gluing it in place with the KraGl. His belt can also come up and ride high over his abs. But those are just nits – I’m very happy with how Thanos turned out.

My take on the Marvel Cinematic Universe is that Iron Man, Hulk, and Captain America are the Big Three, at least for the action figures. I haven’t picked up a movie figure of Thor since that first Walmart exclusive wave that sort of subbed as a Thor movie Legends wave of four figures.

Thor needs some love in the line, not getting Legends for The Dark World sequel, and he’ll get it when Amazon releases their exclusive 4-pack this year that also includes redecos for Hawkeye (another figure I don’t have) and Black Widow for AOU, and the first Bruce Banner movie figure for Legends (see our Toy Fair Marvel Legends Report for more info). 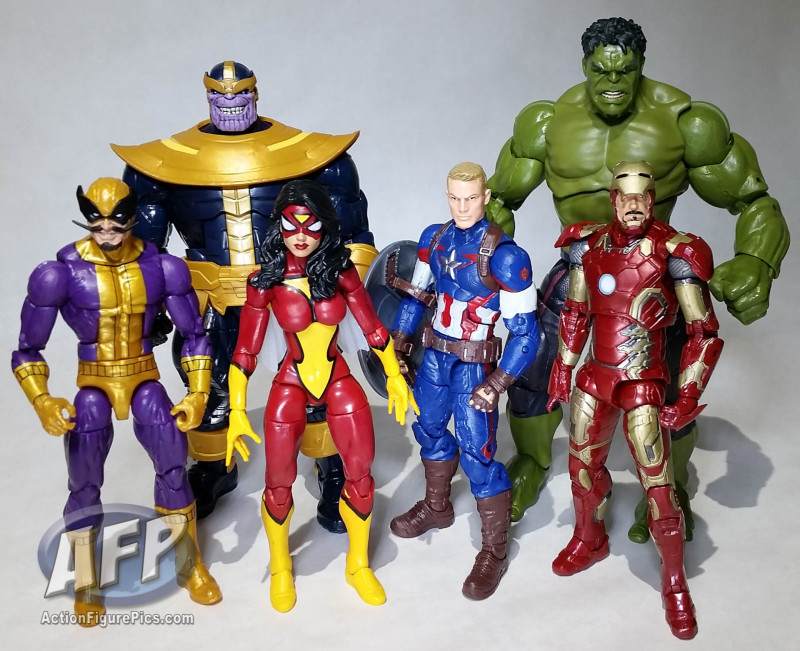 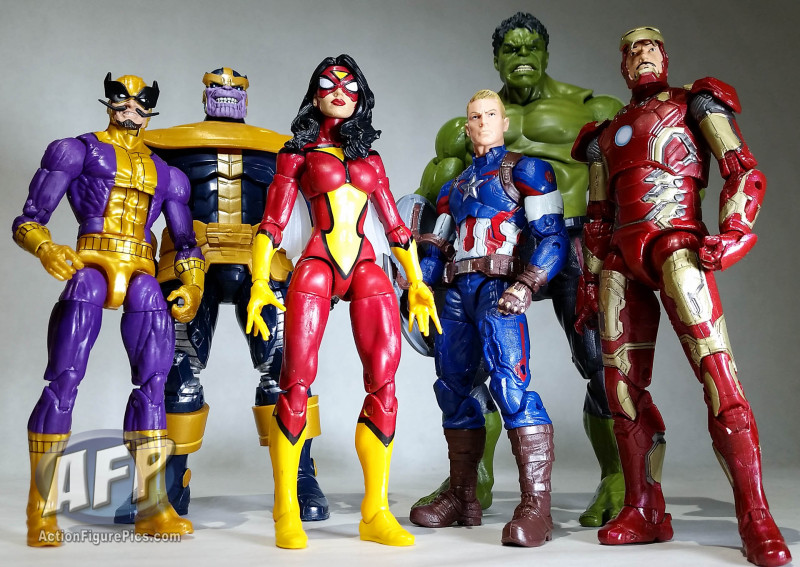 Hasbro is continuing to hit the right marks with Legends with the first wave of 2015.

I’ll take a look at the Spider-Man wave next. Stay tuned!