This will be the last Ask Matty before San Diego Comic-Con, and it’s a double-sized edition. Mattel will resume taking our questions in August. Now, buckle up and have fun!

1. What are the DC comics that you’re reading? How do they influence what you want to see in the various DC toy lines?

Pretty much everything DC puts out these days is required reading! On a personal note, I really enjoy the current Green Lantern and Flash Rebirth storylines. Booster Gold, Legion of Superheroes, Batman, the War that Time Forgot and Action Comics are also favorites.

The current DC Archives collection hardbacks have been a fantastic way to re-read some classic stories like the Batman Annuals and the Roots of Swamp Thing. Highly recommended! Kamandi and anything by Jack Kirby is also a favorite of mine.

Favorite characters definitely have a way of influencing both Mattel, DC Comics, Warner Brothers and the Four Horsemen as we decide each year who makes the cut in each line!

2. We’ve seen some of the Mattel DC lines tied to events in the comics, like DC Infinite Heroes with Crisis on Infinite Earths. However, it seems like DC Direct is tied into the modern events, for example, with its Blackest Night line. What are your plans to leverage upcoming events in the comics? We believe you’ve said there would be a new theme for DCIH in the upcoming year, but what about DC Universe Classics – will there be comics-themed waves, or should we expect ties to the comics to be more opportunistic?

We will be getting to some of the current storylines, but unlike DC Direct, Mattel does not work with the DC editorial staff, so we find out about new stories when they hit the racks just as fans do! It take about one to two years to go from concept to shelf, so newer characters and storylines may take a little bit before they appear in our toy lines. We actually have a figure set coming out later this year that features some DC characters that first appeared about 16 months ago.

And yes, we are looking at having some more themed waves in DCU Classics as we head into 2010. 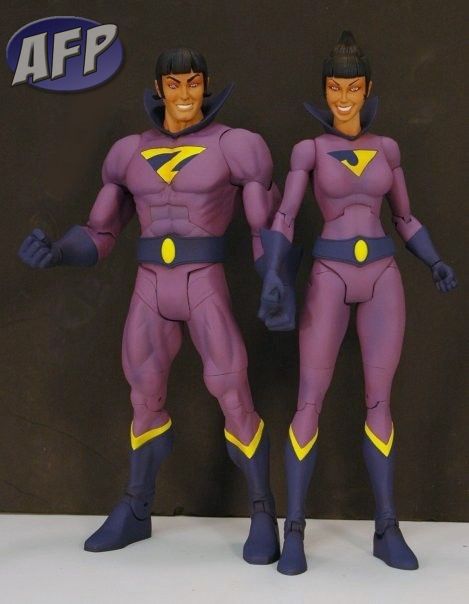 3. We think most collectors are aware that Toy Guru is a pretty big fan of the Justice League Unlimited cartoon. Before JLU, there was already a rich history of DC animated shows, like Super Friends, Batman: The Animated Series, and Superman: The Animated Series. Which is your favorite – is it Super Friends? What other characters from your favorite series would you like to see in your toy lines, beyond the JLU Super Friends 3-Pack (Apache Chief, Black Vulcan, and Samurai) and the DCUC Wonder Twins? Are they fair game in any of the toy lines?

You can bet I’m a huge fan of JLU and the whole Bruce Timm animated DC Universe. We’d love to go back and do more characters from the earlier shows like Batman and Animated Series and Superman as well. As for earlier series, Challenge of the Superfriends is a personal favorite from my childhood. Is it was a big influence on how the Wonder Twins will be joining our 6” line at SDCC!

4. With modern animated features, DC Direct and Mattel have each done companion toys, like DCD with Superman: Doomsday and Justice League: The New Frontier, and Mattel with the DCIH Hal Jordan for Green Lantern: First Flight. How do you decide who’ll get to do toys for each of those features? With Superman / Batman: Public Enemies coming up, any chance to see toys from Mattel? Care to drop any hints?

We’ve got some big surprises in store. Just wait for SDCC!

5. Masters of the Universe Classics is another property with a rich animated history. What are your favorite episodes and who were the standout characters in them?

The 2002 MOTU series is my personal favorite with the “Power of Grayskull” and “Rise of the Snakemen Part II” being favorite specific episodes. In the Classic series, “Evil Seed” and the “Golden Disc of Knowledge” are also favorites. Anything with Zodac just rocks. I always felt he was underused. 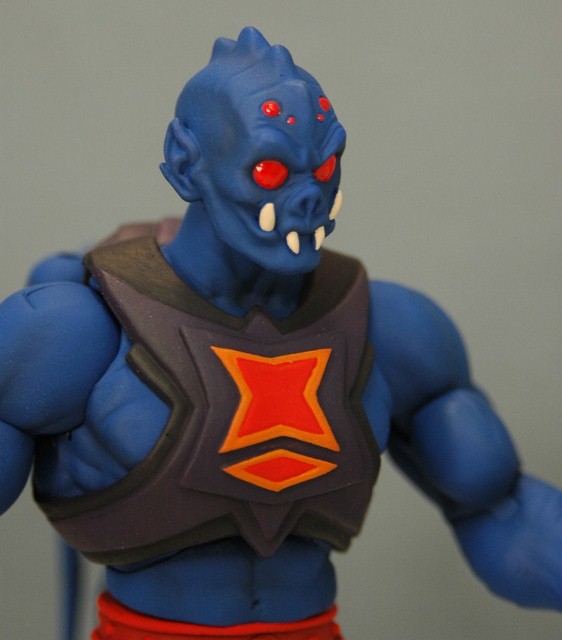 As for standout characters, Stratos, Buzz Off, Spikor, Scareglow, the Comet Warriors and Webstor were some of my favorite figures as a child and I’m looking forward to eventually bringing them to the Classics line (well obviously Stratos and Webstor already made the cut, but you get the idea!).

6. You recently mentioned finding a lot of vintage MOTU collateral that predates the original toys. What’s the coolest piece you found? How will this material influence the toy line? For example, would you use it to build up the character profiles, or might you even introduce alternate characters based on what you’ve found?

The short answer is yes. We are definitely looking at some of the concept art and storylines as we work on the MOTUC bios such as using “Demo-Man” as the sprit Hordak bonded with Keldor to form Skeletor. One of the coolest pieces we found was the original story concept called “The Fighting Foe Men” where Beastman was He-Man’s main enemy and Mer-Man was a good guy from a distant water planet which had evaporated into the sun!

As mentioned in previous Q & As, the 1987 film is not something which will currently be part of the Classics line. As for the new film, it is under development and once we have news to announce we will do so with all the Power of Eternia! Until then, Good Journey!

“Why do you say such things if you know I will kill you for them?” Superman II and Dark Knight are some of my favorite DC based films.

9. Ghostbusters has two feature films and two animated series to pull from, and you’ve mentioned wanting to pull from all sources. The main characters had widely varying designs across the two different mediums. Since we’ve already seen the movie costumes, will you also do cartoon costumes? Will the cartoon figures be in the same line or a separate one?

We are looking at bringing the animated Real Ghostbusters to collectors in time. But right now the current 6” and 12” line will focus on the original films.

10. OK, now that we’ve innundated you with questions *not* about SDCC, here’s your chance – if there’s anything you’d like to highlight to AFP readers about Mattel’s plans for SDCC, please let us know.

We are going to have an amazing booth this year featuring all of our popular DC lines like JLU, Classics, Brave and the Bold and some new surprises. We’ll also have Ghostbusters Classics, MOTU Classics, Toy Story, Cars, Hot Wheels, Star Trek and the premier of new toys from the upcoming James Cameron film Avatar!

[Editor: In response a follow-up question, Mattel indicated we would not be seeing any figures from their upcoming WWE line at San Diego Comic-Con.  Mattel’s WWE license begins January 1, 2010. ]

Here’s a round-up of the other Ask Matty sessions from around the web. (Links to be added as they come up.)