This is the second of three reviews I’ll be doing for the second wave of Hasbro’s Marvel Legends 2-packs.  I reviewed the SHIELD Leaders 2-Pack with Maria Hill and Iron Man yesterday, and thought that Maria Hill is a continuation of the good female figures that started with Shanna the She-Devil and Elektra, and that Iron Man is arguably the best one we’ve gotten in the 6-inch scale.

Today, I’ll be reviewing Ninjas vs. Super Spies, which pits a red Hand Ninja against former head of SHIELD, Nick Fury. I received a set of 2-packs as part of the Marvel Universe Covers Contest, and while I couldn’t open that set, I did take some packaged pictures. Here they are again, to refresh your memory. 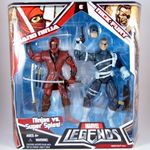 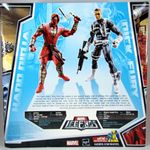 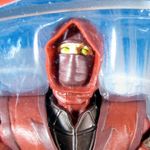 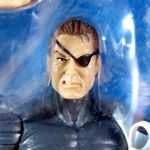 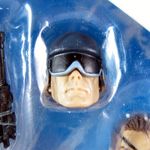 Here were my thoughts at the time: Marvel Legends 2-Packs Wave 2 – packaged

The Marvel Legends and Marvel Universe teams must be sharing a playbook, because the Hand Ninjas in both lines have the same origins.  First, Hasbro produced a Ronin figure from the New Avengers comic, and then they leveraged the Ronin body to produce the Hand Ninja.  Although there are structural differences between the ML and MU ninjas, for example, on ML the robe is a separate piece while on MU it’s part of the torso sculpt, I am wondering if they are leveraging digital sculpts across lines to reduce costs.  If that is the case, I am hoping that we will eventually see some of the upcoming Marvel Universe figures from the single carded line and Secret Wars in the 6-inch scale.

But back to the ninja at hand (I didn’t even try to make that punny).  He’s got most of the Toy Biz-like articulation, continuing Hasbro’s trend to return to some of the product attributes that made the Toy Biz line so beloved – ball-jointed shoulders and hips, double-jointed elbows and knees, ab crunch, and waist swivel.  He’s got two Hasbro-type joints in the wrists and ankles – a combined swivel and hinge that eliminates the need for cuts in the forearms or calves.  I like that particular articulation in the wrists, but it eliminates and side-to-side tilting in the ankles.  The neck is the only major deviation from Toy Biz.  It’s a large ball joint that enables head swapping (though no alternate head comes with the figure – it was for Ronin and Clint Barton), but it lacks a disc for up and down motion. 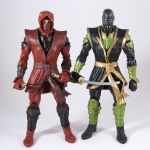 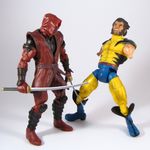 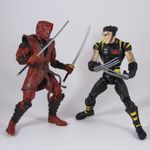 Even though I’ve never seen this particular design used in the comics, I’ve had time to adjust to the Ronin body for Hand Ninja through its various incarnations in Marvel Universe.  So while I’d still prefer the more traditional ninja garb, I can buy the extra stylized armor plating on this figure.

There’s only a couple of problems of note.  As we saw with Ronin, the ninja robes do hinder movement in the ab crunch, waist swivel, and in particular, on the hips.  Marvel Universe has the same problem with the hips, but since they made the robe part of the torso sculpt, the MU ninjas have all the movement there.  I wonder if there’s potential reuse for the torso down the line.  I’d like it if the head also had more range of motion.  The restrictions are a combination of how far the hood sculpt comes down and the lack of the hinge in the neck.  And, like the red ninja in Marvel Universe, I find the eyes on this one a little droopy.  They fixed that in the MU white ninja, and I wonder if we’ll also see it fixed for the white ninja in the upcoming Dugan 2-pack, if that makes it out.

For accessories, the Hand Ninja comes with a set of nunchaku and 3 swords that all fit snugly in either hand.  Why three swords?  Your guess is as good as mine.

While in MU, Nick Fury was an exclusive figure for Marvel Digital Comics subscribers, here we get the option of having either Nick Fury or a SHIELD agent by virtue of interchangeable heads.  It’s those heads that make for the only discernible difference between Fury and the body that was reused for him, the Marvel Face-Off Punisher.  That difference is the size of the neck peg, which is a large ball to accommodate easier head swaps.  I’ve found that having that peg actually improves the motion in the head – as you swivel from side to side, the peg lets you tilt the head for a better look.

Other than that, Fury has the same articulation as Face-Off Punisher – neck hinge, ball-jointed shoulders and hips, double elbows and knees, ab crunch, waist swivel, forearm and calf swivels, finger and toe hinges, and wrist and ankle hinges.

Interchangeable heads gives this set army-building potential, since you can build up an army of SHIELD Agents.  The size of the peg is compatible with that on Ronin, so you can also use the Clint Barton head for more variety.  I do think that Fury and the generic agent’s heads are a touch small, they’re nowhere near as pin-headed as the Face-Off Punisher.  The Barton head looks about the right size, but when I line the Fury head up with the Barton one, the eyes, noses, and mouths line up – so perhaps it’s just forehead up that needs a little more mass.

The plastic is flesh-colored and it’s got a little more of an olive hue to it.  I also prefer the Barton coloring here.  The eyes have specks of color in them, but on Fury his one eye is not centered, so he’s perpetually looking to his left.  I didn’t get that impression when I looked at the packaged set, so I’m wondering if the positioning of his eye is variable.  Tastes will vary, but I like the Fury head sculpt.  He looks like he knows something I don’t, and while there’s still a spot you could add a cigar, it’s not as exaggerated as the head sculpt on the MU version.  Like the MU Fury, he’s missing the gray hair on his temples. 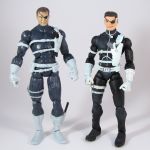 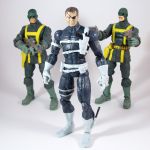 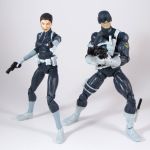 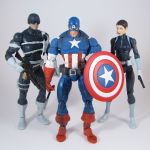 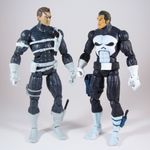 This particular costume is from Fury’s appearances in Astonishing X-Men.  The Cassaday rendition of Fury features a chest holster held in place by two horizontal straps.  For the requisite gadget pouches, Cassaday also had two belts across the waist and one across the right bicep.  These are achieved by on the figure by three additional  belt pieces.  The ones on the waist and arm function stay in position pretty nicely, although you may find yourself pushing the waist belts down from time to time.  The chest straps, however, could use some glue to stay in place.  They slide down on his right side because of the v-shaped torso.  The holster and strap function really well, and the gun looks to be very Fury-like – I’d like to see the reference art they used for it.  And like Punisher, the knife in the boot sheath is removable.

For Maria Hill, Hasbro tooled a new upper torso for the costume elements, but on Fury, it’s straight up Punisher.  Because of that, there’s some missing elements, most notably the costume piping down the center of the torso and around the abs, the piping on the collar, and the zipper pull.  When I made a custom of this version of Fury, I used fishing line for those elements – it was a pain in the butt and I’m not likely going to be doing that again for this guy.  But I do miss them.  Also, because they used Punisher’s plain gloves and boots (aside from the knife holster), they’re missing SHIELD doohickeys on them.

Unfortunately, I used my Nick Fury from Marvel Legends Series 5 to make my custom, so I don’t have him available for comparison.  But I do like this figure more than the original.  Primarily, it’s because of the base body.  ML 5 Fury reused the Namor body from Series 2, and that body didn’t have an ab crunch or ball-jointed hips.  I think the head sculpt on ML 5 channels classic Steranko while this one represents Cassaday pretty well.

One thing that I noted in my Maria Hill review but hadn’t captured pics of is the SHIELD emblem that appears on all their arms.  It’s so detailed, you can read out the SHIELD acronym around the emblem.  I’ve not seen that level of detail on a figure before, and it’s pretty kick-ass.

Overall, I think this set is another good effort by Hasbro, and continues their trend to return to some of the elements that made Marvel Legends successful in the past.  There’s great army-building potential here.  Sure, a Hydra vs. SHIELD 2-pack would have made more sense, but I think it’s good for Hasbro to trend some new ground before revisiting the misfires in their run.

If this wave of 2-packs is successful, we’ll see this one resurface as a white Hand Ninja vs. Dum Dum Dugan.  So, buy this stuff, because SHIELD won’t be complete without Dum Dum!

Coming soon, I’ll be reviewing the last of the 2-packs – Alien Armies, with Skrull and Kree soldiers.