It was a little over a year ago, at San Diego Comic-Con, and I had been floored by the Hasbro Marvel team.  Let’s face it, since Hasbro took over the Marvel license, they had some hits and some misses (some would argue more of the latter), and had just started hitting their stride.  They had just released a Build-a-Figure Fin Fang Foom (wow!) and the their newest 2-packs were reminiscent of the Marvel Legends of old.

And then, the void.  The retail channel was bogged down in older Legends products, and new product kept getting pushed back.

But the day has come, Marvel Legends fans!  The newest wave of Marvel Legends 2-packs are hitting retail shelves, and I’ll be reviewing them over the next couple of days.  First up, the SHIELD Leaders 2-pack, featuring the former top cheese at SHIELD, Maria Hill, and the guy who replaced her in the top spot, Iron Man.

I have had a set of these in my grubby hands for a few weeks, but those were due to go out to the winner of the Marvel Universe Covers Contest, so I first took some shots of the packaged figures.  To whet your appetites, here they are. 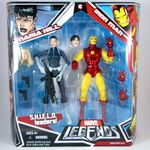 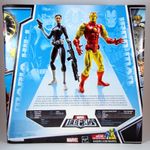 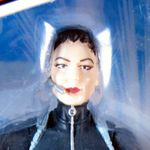 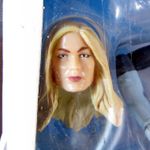 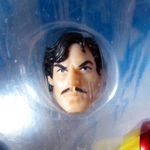 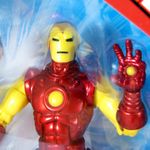 Here were my thoughts at the time: Marvel Legends 2-Packs Wave 2 – packaged

Hasbro has come a long way with their female figures in Legends.  We’d all like them to take a mulligan on Emma Frost.  The most recent females, Shanna the She-Devil and Elektra have turned it around for them.  Maria Hill reuses a lot of the Elektra sculpt, but adds a new upper torso, boots, and head (of course).  The upper torso has nicely sculpted details.  A cheaper way would be to just paint the elements on, but Hasbro went to town and sculpted the harness, zipper, zipper pull, and raised bands for the collar.

The belt is a separate piece of flexible plastic.  It’s not glued down, but rests snugly at just about the right height so the torso doesn’t seem too short.  Maria’s head is nicely sculpted and doesn’t have the squished look that plagued Emma Frost and other earlier Legends.

The alternate head is Sharon Carter, SHIELD Agent 13.  When we originally talked to Hasbro about the 2-packs, they had planned to paint Sharon’s hair a different color, since the next wave would include another SHIELD Leaders 2-pack with Sharon and a Stealth Armor Iron Man.  So, it’s a bonus that we’ve got her early.  I think Hasbro still has a little work to do their hair pieces.  Maria looks fine with hair that’s part of the sculpt, but Sharon looks just a little off.

The articulation is as good as we’ve gotten from Hasbro, and it’s all pretty functional.  While there’s no bicep swivel, the combination of the elbros with wristbros (ball-joints that swivel) allow Maria to easily grip her assault rifle in both hands.  (If you’re feeling John Woo, she also comes with two pistols.)  Similar innovation in the ankles allows the feet to swivel without requiring a cut in the calf, although the downside is not having side to side ankles.

The paint is basic but effective.  The head is cast in flesh-colored plastic, so it’s a little shiny, but the lips are painted.  And while we have eyelashes, we just get a black dots for the pupils.  I’ll have to check my comics, but I think she could use some white on the raised ridges of her collar.

What is really flooring me right now is the SHIELD tampo on both arms.  I will need to snap some more pictures, because there’s actually writing around the logo.  I can’t even make it out with my eyes unassisted, so Super Macro setting, here I come.  I really want to know which version of the SHIELD acronym they went with.  Amazing!

The prototype at Comic-Con that had me floored was Iron Man’s.  We’ve seen a boatload of Iron Men throughout the Toy Biz and Hasbro runs of Legends, but I always had a special place in my heart for the first one, the Series 1 Iron Man from Toy Biz.  When I saw the proto, I thought that at long last, a new favorite was coming.  My biggest regret from that Comic-Con was that I never made it to the Hasbro booth in time to play with the prototype that Hasbro designer Dwight Stall had with him.  Others did, and I hate them all.

Speaking of heads, both the Iron Man helmet and the Tony Stark heads are kick ass.  I’d have loved some shaded lips on the Stark head, but I’m more than pleased with how both heads came out.

Best Iron Man ever?  Certainly the best that Hasbro has produced, and arguably the best ever in 6-inches.  But that’s not to say there aren’t things I’d love to see improved.  First, there’s the yellow.  That’s the color of the plastic, and when you put it up against the painted red, I wish they had done just a little bit more.  I think some airbrushed shading on the limbs would go a long way.

Another nitpick I’ve got is with the extra hands.  He’s packed with a fist and a repulsor blast hand, which are great, but I can’t figure out what the extras are for.  Is it so Tony can perform the “I’m trapped in a glass box of emotion” pantomime?  Or is it so he can fend off the advances of a lust-crazed She-Hulk?  I’ll never know.

Maybe the biggest beef I have is with the shoulders and how they interact with the torso.  Because Iron Man has those ridges right at the shoulders, it’s impossible to get Iron Man to put his arms down at his sides.  For people who like their Iron Man in vanilla poses, for an armory display, for example, this will frustrate you no end.  In action shots, though, this figure channels Bob Layton in how it looks, moves, and poses.

Some people were worried that he’s too short and that his waist is too narrow.  I’d argue he could be a touch taller and a touch wider in the waist, but neither of those things bother me in the slightest.

So, there you have it.  The first of three new Marvel Legends 2-packs that I’ll be reviewing over the next couple of days.  Let me know – which of the too many to count Iron Men is your favorite?