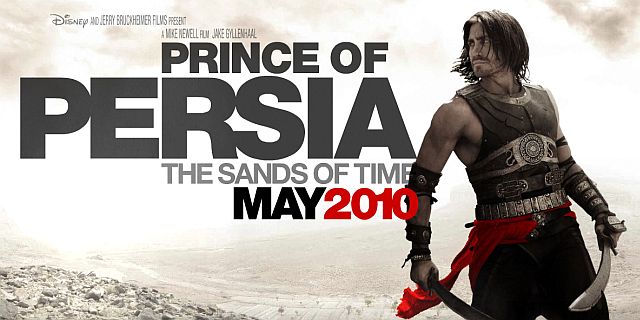 I guess I’m not up on my movie news, because I didn’t know that Disney was delving into the video game genre looking for its next summer franchise. I played the original Prince of Persia game that came out in the late 80’s, but haven’t revisited it since. This movie is titled for the 2003 video game from Ubisoft, and Disney and McFarlane must be hoping it’ll spawn many sequels, just as that particular game did.

McFarlane plans to make figures in both the 4-inch and 6-inch scale, and the smaller scale will also get horses (not much in the way of vehicles in ancient Persia, I suppose) and a playset.  The figures are planned to hit retail in May next year, around the same time as the movie is planned.

I wonder if Disney will also produce toys exclusive to their Disney Stores, like they did for Pirates of the Caribbean.

MCFARLANE TOYS TO BRING ‘PRINCE OF PERSIA: THE SANDS OF TIME’ TOYS TO FANS WORLDWIDE
Toys and Collectibles from the Upcoming Disney/Bruckheimer Summer Movie to Hit Retail May 2010

McFarlane Toys and Disney Consumer Products have united to create a spectacular line of toys based on characters and scenes from the highly anticipated 2010 major motion action/adventure film Prince of Persia: The Sands of Time, presented by Walt Disney Pictures, producer Jerry Bruckheimer, and directed by master storyteller Mike Newell.The film, based on the best-selling video game franchise of the same name, stars Jake Gyllenhaal, Sir Ben Kingsley and Gemma Arterton in an epic tale of adventure across the mysterious lands of Persia, where deceit and betrayal threaten the destruction of two noble kingdoms.

Award-winning McFarlane Toys capture every detail and the exact-likeness of the on-screen actors based on their characters including, for the first time, the Prince of Persia hero, Prince Dastan (Jake Gyllenhaal).

“It’s always been a dream of mine to work with Disney. Their creative expertise and ability to bring fans top quality entertainment projects and iconic characters is second to none,” said Todd McFarlane, McFarlane Toys visionary and CEO. “We’re really excited about the Prince of Persia: Sands of Time license, and it’s great that we can celebrate McFarlane Toys’ fifteen-year anniversary by launching this exciting product line worldwide.”

McFarlane Toys’ Prince of Persia: Sands of Time toy line allows fans of all ages to bring home all the excitement and adventure of the live-action movie with a range of movie figures, battle horses, play sets, and even a collectible movie replica weapon all hitting retailers nationwide in conjunction with the movie’s release in May 2010.

The Prince of Persia: Sands of Time toy line will include:

THE DAGGER OF TIME COLLECTIBLE

The Dagger of Time is a powerful weapon, capable of allowing its owner to harness the power of the Sands of Time, and manipulate time itself. Your mission is to safeguard the ancient dagger capable of releasing the Sands of Time. Designed to appeal to collectors, the 10-inch Dagger of Time is sculpted in the exact size and ornate likeness of the movie weapon and features a jeweled handle that lights up with a high-power L.E.D., disappearing sand, and soft vinyl blade.

via SPAWN.COM >> NEWS >> MCFARLANE TOYS TO BRING ‘PRINCE OF PERSIA: THE SANDS OF TIME’ TOYS TO FANS WORLDWIDE.