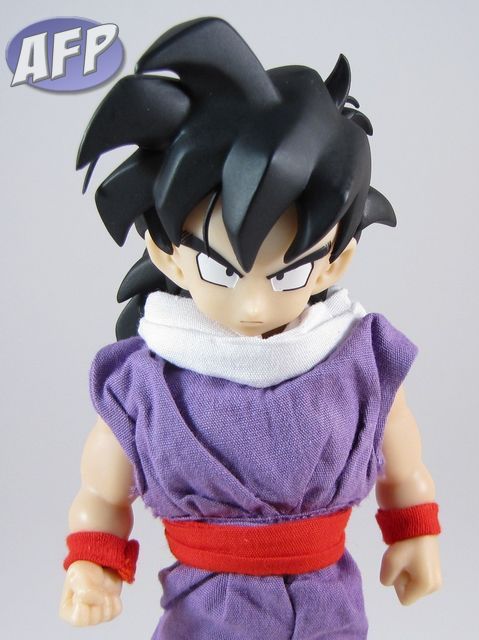 I knew I was on a slippery slope when I picked up the Medicom Real Action Heroes Dragonball Z Goku and Piccolo, regardless of how good of a deal I got at the time.  So when I learned that Medicom would be making a VCD (that stands for Vinyl Collectible Dolls, but I can’t bring myself to put “Dolls” in the title of this article) Gohan, and that it would be coming with an alternate head for the RAH Piccolo, I admitted defeat.

Sideshow is importing the Gohan VCD, but when I asked, they told me that the package they are carrying does not include the Piccolo head.  So off to Ebay I went, paying big international prices and shipping.  I feel dirty. 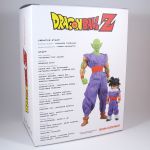 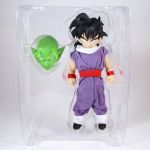 I hate to admit it, but I bought this set for Piccolo – Gohan was just the icing.  I was expecting him to have little to no articulation but was pleasantly surprised to find seven points of articulation.  He has a ball-jointed head (although the hair restricts the up and down movement almost completely) and swivels at the shoulders, wrists, and ankles.  They’re all hidden.  And while these won’t allow you to get Gohan into the same kinds of poses that you’d get from Goku or Piccolo, you’re not stuck with a statue.

He’s about 6 inches tall, and while that reportedly puts him in scale with Piccolo and Goku, he does feel a little small.  I’ll have to go back through the manga to see if I’m just remembering him a little bigger.  This figure represents the time in DBZ when Gohan was being trained by Piccolo, so it’s gratifying that their cloth garments match up perfectly.  Stylistically, he’s also a great match for Piccolo and Goku.

I am a big fan of the RAH DBZ Piccolo as-is, but was bothered that the headgear on him is part of the sculpt – because when Piccolo is about to kick some ass, he throws his turban and cloak away in defiance.  [Insert DBZ roar here.]  But I suppose his antennae made removable headgear impractical.

The alternate head fixes that for me, so I can display Piccolo ready to fight, with headgear and cloak discarded.  I’m a big fan of what Medicom has done with the headsculpt.  He’s got a sneer that lets you know just how insignificant in comparison you are. Color-wise, the new head is a perfect match for the figure.

I was a little concerned about removing the original head, but have not had any problems switching back and forth.  Just be careful not to apply pressure to the antennae.

I’m still trying to figure out if I’m really going to be collecting these things.  The RAH figures have certainly got the most pleasing articulation of any figures I have in any scale, and the sculpts truly capture the Dragonball Z look and feel.  But I still can’t wrap my head around spending in the triple digits for ONE figure.

But let’s see what happens if they make a Vegeta.  [Insert DBZ roar here.]