You know what?  I wanted to take some pictures of the Mezco Mez-Itz Comic Book Hellboy that’s exclusive to San Diego Comic-Con and their online store because I thought it would be a simple review.  After all, it’s a vinyl figure, right?  With vinyl, you plunk them down on a shelf, you dust them off once in a while, and that’s about it.

Not so with this guy.  As you’ll see, there’s more to this figure than you might be expecting.  I was certainly surprised. 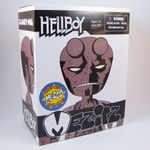 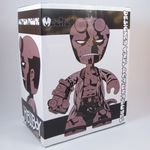 Before we get into all that, let’s talk about the basics.  Hellboy comes in a cardboard box that shows the line art that was used on the figure.  On the front, a closeup of Hellboy’s head.  On the sides, the side views of the head.  On the back, a full size image of the line art.  The box colors are very muted, in contrast with the sticker that declares this a Con Exclusive for 2009.

The inner tray is plastic, and the figure is held in place with one twist tie that’s wrapped in extra plastic on the portions touching the figure, presumably to reduce any scratches from the twist tie.  There weren’t any on my figure.  The Samaritan, Hellboy’s gun, is packed on the same tray separately from the figure.

I love the design.  It really evokes Mignola’s style, and I’d be happy with this figure if it was just a plain old vinyl figure. 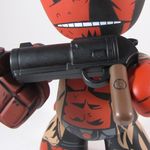 So what’s so special about it?  What I’ve come to expect in vinyl (and mind you, vinyl is really my wife’s thing, not mine) is a head swivel and swivels at the shoulder.  On Mez-Itz, instead of a swivel, we’ve got a ball-jointed neck.  That means you can turn and tilt Hellboy’s head to get many more evocative poses.  This didn’t go straight to the shelf – I keep turning and tilting and it’s all good.

There’s a swivel on his tail.  And there’s also swivels at the hips, and by turning those you can have the figure leaning forward or back and still be stable.  There’s the standard swivels at the shoulders, but on the Right Hand of Doom there’s an additional swivel.  If he had a wrist swivel on his left hand, that would have been icing.

The Samaritan is special too – I’m used to one color and relatively little detail, but Mezco did the Samaritan in black and brown.  There’s even the Bureau of Paranormal Research and Defense logo stamped into the gun handle.

As I suspected, even though the head shape is different, this figure fits in great with the couple of Hasbro Muggs that I’ve got.  I would display Hellboy with them if my wife hadn’t already claimed him as her own.

Buy this figure! And buy the Toys R Us exclusive movie Hellboy and Abe Sapien Mez-Itz.  Do it so we can get the rest of the BPRD made.  If you don’t, I’m going to go bump in the night.  That didn’t come out quite right.

Update: Mezco has a coupon for $5 off any online order good through September 7th.  The code is “summerluvin” – now go buy this guy already!