Two done, two to go!  Some fans have been waiting 25 years to get good action figures of the Ghostbusters,  and with the 6-inch Ghostbusters line from Mattel, we’re getting closer to getting done.  Ray Stantz is the second 6-incher in the line – he went on sale on Mattycollector.com two weeks ago and is still available in limited quantities.  Egon Spengler in a slimed deco (yes, we know he was never slimed) was the first figure in the line and was sold as a San Diego Comic-Con and Mattycollector exclusive.

Ray comes in essentially the same packaging as Egon did.  The images on the card front are the same, with the Terror Dogs and the Stay-Puft Marshmallow Man.  And the cardback is adorned with Ray stats and quotes.  The one notable difference is that the Egon package was resealable, via plastic tabs that wrapped around the cardstock.  With Ray, the bubble is glued to the cardboard.  Now, I can’t come up with any explanation for the change other than that Mattel thought that a Comic-Con exclusive ought to have that as a package feature, while a regular release should not.  It doesn’t make a difference to me, but I know there are some collectors who will find even a minor change like this disturbing, even though the packaging looks identical.

It’s the same base figure as Egon, with a new headsculpt (of course), minor paint app changes (no slime, Stantz instead of Spengler), and a new ghost – this time the memorable Logo Ghost.  Sure, this ghost wasn’t a character in the movies but is memorable nonetheless from all the Ghostbusters marketing.  It glows in the dark.

The headsculpt captures Akroyd pretty well.  As far as I know, the heads were not scanned, just sculpted by the Four Horsemen.  Some people have commented that the head is smaller than Egon’s, but in my own comparisons I don’t see it.  Egon’s hair is taller, as it should be.

My one complaint, the same I had with Egon, is with the plastic used for the nozzle of his proton pack. It’s still too easily bent, and the pose in the package results in it being warped from the get-go.  There must be a better way.

Some have also complained that we ought to have different bodies for each Ghostbuster.   While I think it’d be nice, I recognize that planned re-use is one of the features that is making collector-oriented lines viable for Mattel.  Bottom line – I don’t think a Ghostbusters line would cost out if it included a unique body and tooling for each Ghostbuster. 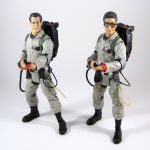 What I do wonder about is the long-term viability of the Ghostbusters line.  I know Mattel would love another runaway hit like Masters of the Universe Classics.  And while the properties have a lot of similar characteristics – both have been around for about 25 years and enjoyed  mainstream success in their days – that Ray is still available 2 weeks after the launch date gives me some concern.

I know that getting Winston Zeddmore and Peter Venkman figures are a lock – after all, they’ve already invested in the base body – but how many other characters we’ll get is yet to be seen.  I’m psyched that Walter Peck is coming, but this line wouldn’t feel complete without Dana Barrett and Louis Tully.