While the series had a lot of reuse, I liked it a lot, since it brought us some unique characters that had never seen plastic before and some repaints in classic looks that were welcome. 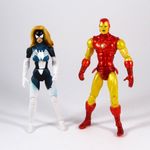 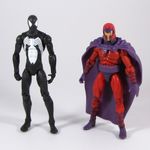 Series 2 also features more reuse with Hulk, Iron Man, and Spider-Man in his symbiote suit – however this time it’s less welcome because the decos aren’t that distinguishing from their predecessors. Add some sloppy paint work and one particularly bad base body choice, and this series is knocked down a notch from what Hasbro achieved with the first.

We got a green Hulk in the first series of Marvel Universe, and while the Secret Wars version features a new headsculpt, it’s still atop a very poorly articulated body. It’s got all the shortcomings of the original, with very limited movement in the legs, an awkward torso joint, and just a swivel cut for the neck. I do like the new headsculpt and the paint is more vibrant, but I really want Hasbro to dump this base body. The sculpt is fine, but the articulation is non-functional.

Cyke was my most anticipated figure from this wave – have loved him in the comics even back when he was so wimpy he lost his job to a de-powered Storm. He uses the new base body that was used on Guardian and Namor in MU Series 5. It’s one of the better bases in the MU line, but might be a little too bulky for Cyke to some. This is one of the figures that has poor paint apps. There’s some significant overspray from the yellow visor, and not enough coverage on the yellow around his wrists. And the wash is a bit heavy, reminiscent of the Cyclops in Toy Biz’s Marvel Legends Series 10. I might not have noticed this had I not seen it in a video review, but Cyke’s lower right leg is longer than his left.

There’s been one base body used for all the Marvel Universe female characters, and Spider-Woman uses it too. It’s a decent base, but is missing bicep and thigh swivels. Paint here is a little rough – the edges of the white areas on the costume are not very crisp, and there’s some splotchy areas. I’ve seen some comments that her hair is seated too high, but I a wondering if this was done intentionally to match the look in the comic.

Speaking of which, the reason we see a jump from issue 4 to 7 in the comics included with the figures is that Secret Wars #7 is where Spider-Woman is introduced to the heroes who were abducted by the Beyonder. 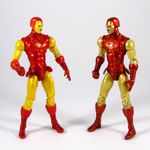 Iron Man is one of the best figures in the entire Marvel Universe line. In Secret Wars, though, it’s a reissue of the Iron Man that was recently released in Marvel Universe Series 3, just with very subtle color differences. On the original figure, the palette is a little darker on both the red and gold. I think my ideal Iron Man would be a mix of the Marvel Universe red and the Secret Wars gold.

There’s another symbiote Spidey from Marvel Universe Series 3 not that long ago, so this is another redo that’s a little too close in time to the original. I really like this base body, but for Spidey it’s just a little too tall. The deco on this is clean and basic, while on the MU version there’s some subtle shading airbrushed on.

Here’s another instance where the comic issue was picked to match the characters. Secret Wars #8 features the symbiote-suited Spider-Man prominently on the cover.

I really wanted this figure when I first saw him, but Magneto is probably the biggest disappointment for me in the wave. Unfortunately, Hasbro chose to use the the Daredevil / Bullseye base body, and that makes him wayyyyy too short. The other parts, the head, cape, lower arms and legs are all new elements and were nicely executed, but none of those added any height. I really want Hasbro to retire this body next.

Luckily, the height issue is easily fixed, particularly with Magneto. In the next day or so I’ll post the instructions for the fix.

With two figures and a comic book pack-in for $14.99 SRP, Marvel Universe Secret Wars Series 2 is a decent value despite the flaws, particularly for those of you who haven’t already picked up the redos in their single carded iterations.  I’m looking forward to the upcoming series, due in 1Q 2010 – with Ultron, the Enchantress, and more coming up, we’ll see if Hasbro can raise the level of their game.