This is a review from Sandman21xxi – he’s become a fixture on the Fwoosh with his great pics across a variety of toy lines, and he’ll be joining us soon as a regular contributor on AFP! 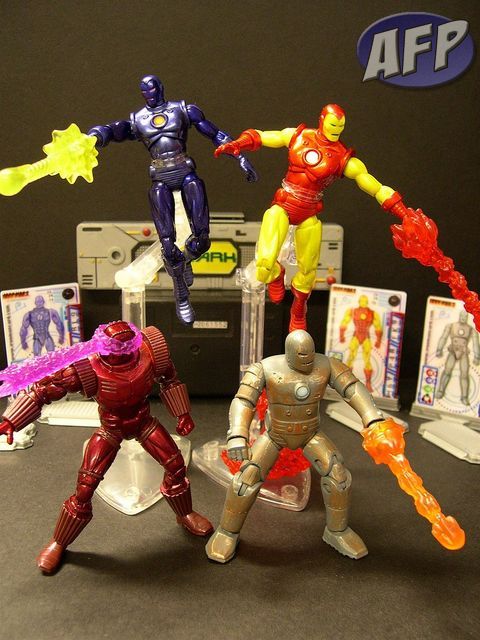 Three months to go before Iron Man 2 hits the theaters (I believe the release date is May 7, 2010), and the toys have started to show up in some stores! I got this set at Toys R Us, which somewhat surprised me as it’s only January, but hey I’m not complaining! These figures are from the Comic Series. I saw some from the Movie and Concept series, but I was more interested in these guys because they would be a welcome addition to my Marvel Universe collection!

I’m doing more of a picture review with some of my observations added in. Let’s start with a lineup pic for size reference and some comparison pics with some Marvel Universe figures.

I do love the new sculpt and articulation included in these figures. The designers did a good job with the sculpts and I see some good attention to detail specifically in the First Appearance IM and Crimson Dynamo. The proportions of the bodies are nice, especially in comparison to the Universe figures. I personally prefer the ball-jointed hips (a lot of different opinions on this), because I think they pose better and are more stable. 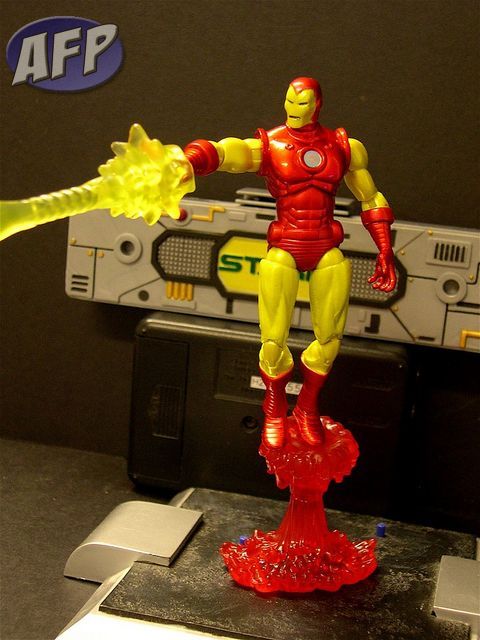 Overall I like this figure, I prefer him over the past MU figures. But I do have some nitpicks. His head looks a tad small, especially looking at him from straight ahead, and his upper legs do kind of prortude from the hip ball too much. Also he could use a repulsor firing hand (like the first MU Iron Man figure has) and a fist. The articulation is pretty good except for one thing: The head/neck moves like a swivel, I’m not sure if it’s even a ball joint! (Cmon Hasbro designers! Iron Man should be able to look up, even just a little!) They are so close to having a nicely sculpted and decently articulated figure in this scale of Classic Iron man. He comes with a repulsor blast accessory (sorry he’s using Stealth’s accessory in this pic!) and a boot blast base. 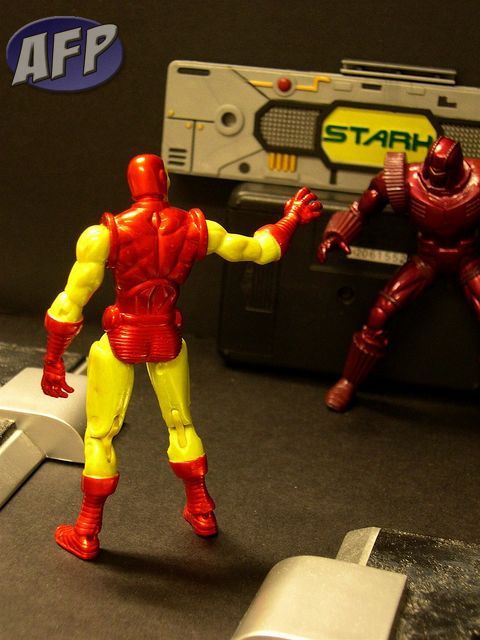 He looks good from the back, the sculpt on his torso muscles are nicely done. 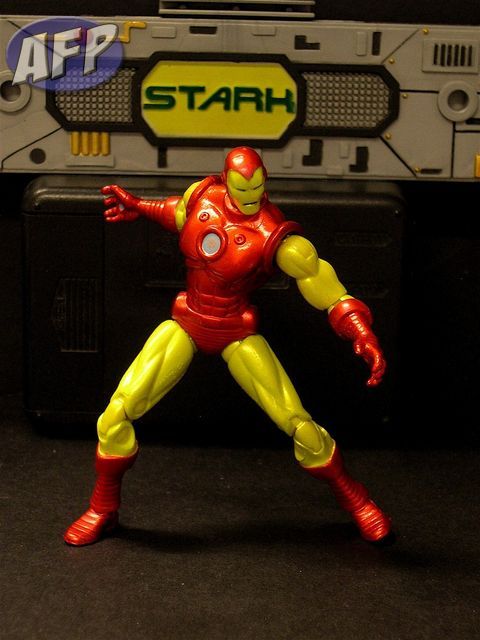 If you strike the right pose though he looks really good! In this pose you don’t see much of the hip protrusion and his head doesn’t look so small. I would say in certain angles this Iron man looks really good! 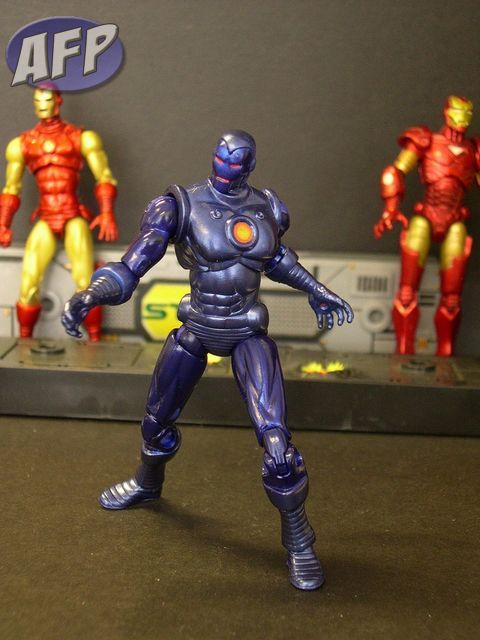 My nitpicks from Classic IM are not as obvious on this figure probably because of the color. I love the blue paint they used, his torso, gloves and boots have a different shade. Notice though I got one with two left upper arms. I’ve been getting a lot of these kind of defects lately from Hasbro Marvel figures.

They even sculpted the bottom of his boots!  He has a repulsor ray accessory (which I love), he doesn’t come with a blast base though. 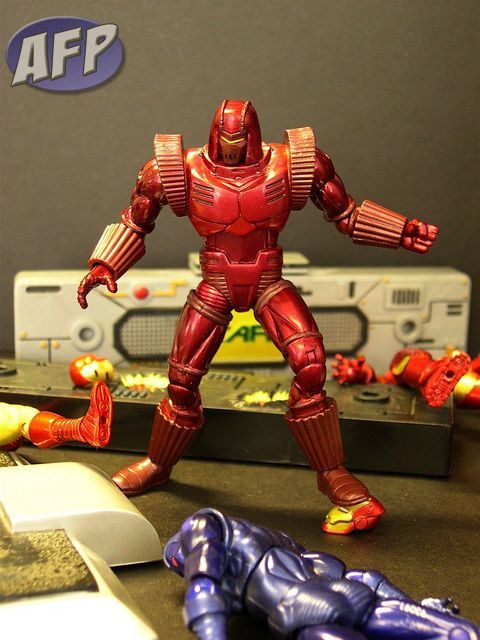 I love how the articulation blends really well on the figure specifically the torso and the hips. (Probably moreso because of the armored look). He can’t do a lot of athletic posing, but I’m satisfied, armored guys are not supposed to anyway! The sculpt and metallic paint looks really good! There is something going on with his lower legs though, it was suggested that they might have been assembled backwards, the do seem that way.

I like his eye beam blast thingie. Overall a great figure! 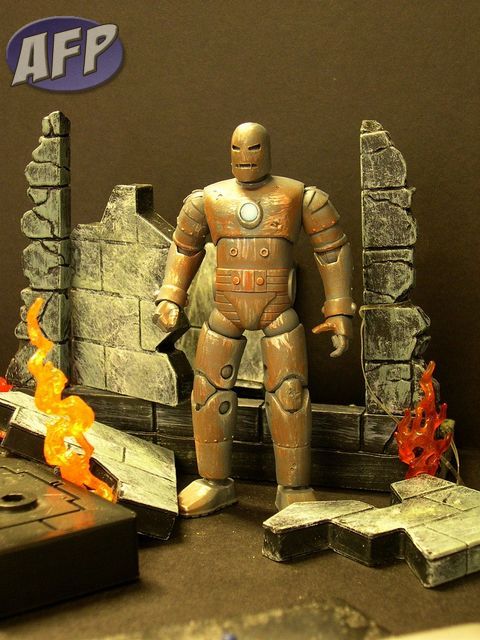 Top notch sculpt and paint here! Real nice attention to detail. Articulation wise his head has some upper lower movement, torso joint due to the sculpt barely moves at all, the rest has pretty good range of movement though, he’s not really that flexible anyway in this armor right?

All of these figures come with stands and “armor” cards. They look like concept art for the toys themselves. A nice little add-on. 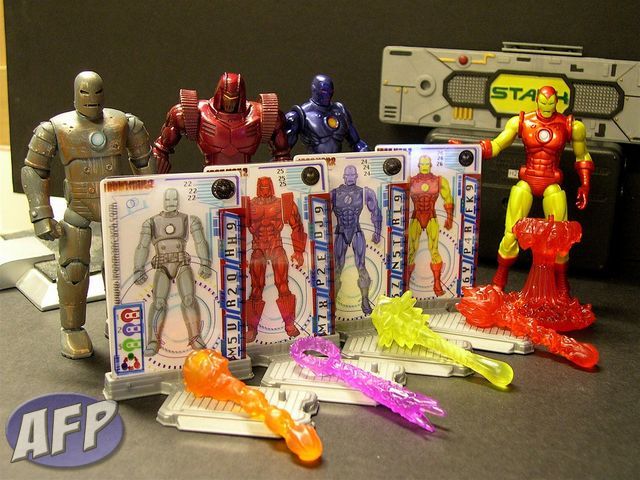 Overall a great group of figures that I’m happy to have, I can’t wait to get War Machine! Although this is a movie line, I am glad they are including comic versions of the characters! It’s good to be excited about Marvel figures again, in the past MU has been more dissapointing than exciting for me, although they are getting better with recent releases. I wish Hasbro would apply the same amount of attention to detail to their MU line, and I hope the future releases for the Iron Man 2 Comic series are as good as these!