If I could tell my younger self that one day I’d be gingerly pulling pants onto a 12-inch figure, being careful not to snag or tear them, my younger self would have had a good laugh.  After all, as one of my good friends likes to say, I collect action figures – not dolls.  Well, if the Hot Toys Joker from The Dark Knight is a doll, then a doll collector I’ve become.

Not that I didn’t see myself ending up here – my slide down the slippery slope began with the Medicom Real Action Heroes Goku and Piccolo and got cemented when I bought the VCD Gohan just for the Piccolo interchangeable head.  But this is my first Hot Toys purchase.  And judging from how I feel about this 12-inch action figure – not doll! – my wallet is going to be taking a beating. 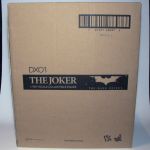 Before I even got to the figures, I was astounded by how much actually went into the packaging.  The inner box flips open to reveal a description of the Joker and his role in The Dark Knight  as well as three full-sized playing cards. 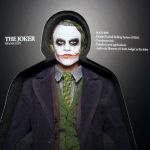 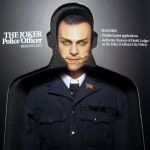 The tray holding the playing cards lifts up and out to reveal the Hot Toys Joker figure.  Billed as the “Gotham City Police” figure, this actually contains enough clothing and accessories for two complete figures, and interestingly enough, the figure comes clothed in the costume the Joker wore for much of the movie.  This outfit and head sculpt are an update from the previous Hot Toys Joker, and while I don’t have that figure, I believe there have been several significant upgrades which make this a worthwhile addition to those that own the previous release. 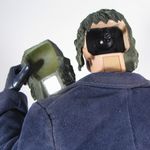 First and foremost is the Parallel Eyeball Rolling System (PERS).  The Joker is the first figure to utilize this new system, which is accessed via a joystick hidden by a removable panel in the back of the head.  The panel is held in place by a magnet, and while you can easily see the outline if you’re looking for it, you’ll most likely be captivated by the figure’s eyes.  To operate the PERS, you just move the joystick in the direction you want the eyes to look.  It has a great range of both up / down and left / right motion.

The second upgrade to the figure is the inclusion of grenades from the kitchen scene of the movie.  No detail is spared here, although those of you who attached the included safety pins might wish they omitted them.  Again, I don’t have the earlier figure to compare, but was impressed that there’s even a little hook to hang the drawstring ring on by the grenades when you don’t have him in the iconic pose.

Underneath the jackets and vest, he even has suspenders.  And those socks!  The Joker also comes with his knife with retractable blade, pistol with removable magazine, playing cards, and five other hands, just for this outfit.  He also comes with a lighted stand, which I haven’t even had the chance to take out of the box yet.  [Note – the flesh colored hands in the seated pic are not included with this figure.]

The Heath Ledger likeness is pretty good to me, and with PERS it adds an eerily life-like quality to the figure.  I had to stop myself from posing and reposing this figure so I could get this review done.  My nit with the head sculpt is that the hair on his left side hangs a little off the face.

But that’s not all!  It was almost an afterthought for me because I had so much fun with PERS and the other Joker costume, but this is the GCPD Joker, right?  I hear that the slim Narrow Shoulders [correction – thanks to Buttmunch from the Fwoosh] TrueType body is the one you want to get if you want to display both costumes at once, and I would hope that the original Joker’s body is compatible for the same purpose.  I was lucky enough to win one of Hot Toy’s holiday gifts, so I used that body with the thigh-bulking pieces removed for my Gotham City Police officer.  Unfortunately, the neck isn’t compatible with that of the GCPD Joker head (which does not come with PERS), so I won’t be doing that swap any time soon.

One thing I’m going to have to get used to is dealing with the fragility of fabric.  The GCPD hat has little metal pieces to simulate clasps on the side of the hat.  I managed to pull one of these off when putting the hat on the figure’s head.  I also noticed some fraying on both costumes, in particular in the sleeve cuffs.

No extras for this costume, but there’s still a heck of a lot of detail – the medals, the badge on the hat, and the patch on the sleeve among them.  The stock on the rifle even slides back to reveal bullets. (Similarly, the barrel on the Joker’s pistol also slides back.)

In summary, I’m delighted with the Hot Toys DX MMS Joker.  It’s an excellent action figure – not doll! I have the DX MMS Batman and the battle-damaged Iron Man on order, but may have to search out a Two Face as well.