Mattel was not able to show the upcoming Masters of the Universe Classics “celebrity” figure for San Diego Comic-Con at the MOTU Art Show at Gallery 1988 in Los Angeles last night, but they swapped in a previously unannounced figure – Optikk.

Optikk is from the New Adventures of He-Man, the first from that show announced, and will be the Club Eternia figure in May.  He looks like a pretty decent update of the original toy.

Also on hand were Moss Man and Evil Lyn (with an orb that will fit on her wand or staff), and an armored Screech with perch.

Our friends at Action Figure Insider were on hand.

Those camera phone pictures were enough to whet your appetite with the new figures revealed tonight at Gallery1988, but how about some more detailed shots? Ok .. you asked for it! 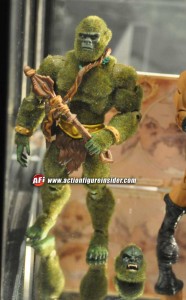 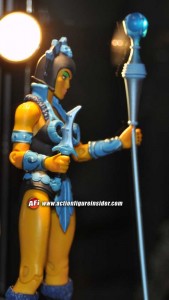